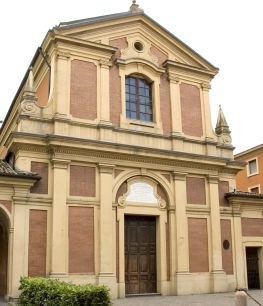 Already at the end of 1200 Castelfranco was divided into two parishes (S. Maria to the north of the Via Emilia and S. Giacomo to the south), each of which with its own cemetery. It was only in 1923 that the archbishop of Bologna decided to unite S. Maria and S. Giacomo in a single parish, that of S. Maria. The church of S. Giacomo has been enlarged and restored several times. Composed of a single nave, the church offers, among the works of art placed on the side altars, the Statue of St. Nicholas by the sculptor Scandellari and the painting depicting S. Tommaso da Villanova and other saints by Sirani. Also worthy of mention are the stucco statues of the Madonna della Cintura, by Angelo Gabriello Pio, the statues of Santa Monica and Sant'Agostino, San Mauro and Santa Gertrude. The Romanesque bell tower preserves, unaltered, the original structure.