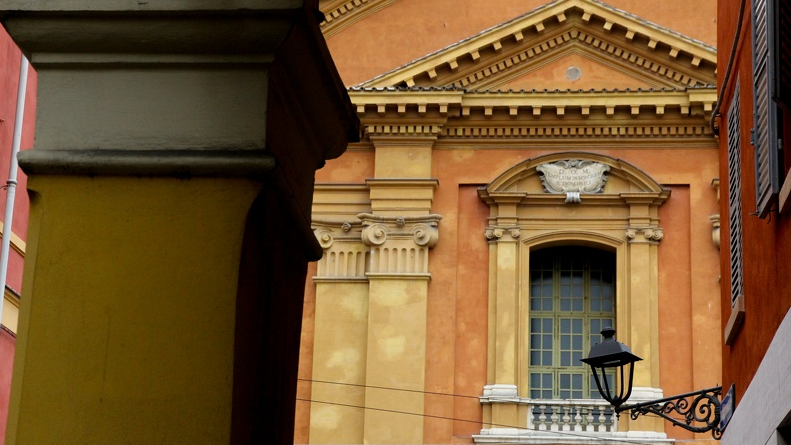 A short distance from Piazza Roma is Piazza San Domenico, named for the church located there. Next, head south toward Via Del Taglio, lined with elegant shops, for some indulgent shopping.
Follow Via Del Taglio northwest to where it terminates in Piazza della Pomposa. This piazza offers one of the most picturesque views of Modena and, in the evening, turns very lively as young people flock to “where the action is.”
Walk back toward Via Emilia and continue on that street to Largo Porta Sant’Agostino, a large, rectangular piazza where a church of the same name looks out onto the square. The imposing Palazzo dei Musei is also located there.
From Via Sant’Agostino, set off on your own through the dense network of streets and alleyways in search of other small piazzas and picturesque corners of the city center. In the small and intimate Piazza San Giacomo, you can admire the graceful Fountain of the Nymph, created by Graziosi in 1926.
Next, head for Piazza San Francesco and the Fountain of San Francesco, also by Graziosi (1938). If time permits, visit the interior of the Church of San Francesco which houses an impressive “Deposition from the Cross” by Antonio Begarelli.

Finally, continue up Corso Canalchiaro toward Piazza Grande and take a detour on your right for Piazzetta della Redecocca, a small space framed by lovely porticos and picturesque houses. During the Summer, some of the restaurants on the piazzetta provide outdoor seating.

With the arrival of the Este family, San Domenico, because of its proximity to the ducal residence, became the official church of the court. Inside the church a beautiful group of seven terracotta statues by Antonio Begarelli can be seen.

The piazza takes its name from the church dedicated to Santa Maria della Pomposa, at one time annexed to the better known Pomposa Abbey in Comacchio, which was founded in the 9th century. Today the piazza looks as it did in the 18th century, though the adjoining urban spaces have been redeveloped and are now used for popular entertainment. At No. 89 is “Casa Tassoni,” a typical example of a Renaissance-era residence in Modena. Nearby, on Via della Pomposa, is the Aedes Muratoriana complex, which includes the house in which the distinguished intellectual, Ludovico Antonio Muratori, lived between the 17th and 18th centuries. Muratori is considered the father of Italian historiography, and his residence stands alongside the church of Santa Maria Pomposa, one of the oldest in the city, where Muratori served as parish priest from 1716 until his death.

Returning to Via Emilia, head toward Largo Porta Sant’Agostino, a large rectangular piazza that is home to the Church of Sant’Agostino and the imposing Palazzo dei Musei.

This piazza, with the recently restored houses that surround it and the beautiful bronze Ninfa Fountain by Giuseppe Graziosi, is a highly suggestive and intimate angle of the city.
At No. 14 stands an example of a house with a tower, in the style of the fortress-houses of wealthy medieval families. A vestige of the ancient church dedicated to Saints Phillip and James (Filippo e Giacomo), devastated by a fire in the 16th century, is still visible and now serves as a residence.

Proceed toward Piazza San Francesco and the Fountain of San Francesco, a 1938 work by Giuseppe Graziosi. If time permits, visit the interior of the Church of San Francesco for an impressive “Deposition from the Cross” by Antonio Begarelli.

Finally, continue up Corso Canalchiaro toward Piazza Grande and take a detour on your right for Piazzetta della Redecocca, a small space enclosed by a lovely portico and picturesque houses. Some of the restaurants on the piazza offer outdoor seating in the Summer.
A charming and relaxing walk will take you down streets and alleyways in search of other small piazzas and picturesque corners of the city center. If you’re a fan of photography, you’ll find more than enough inspiration along the way. For questions of any kind, don’t hesitate to contact us.