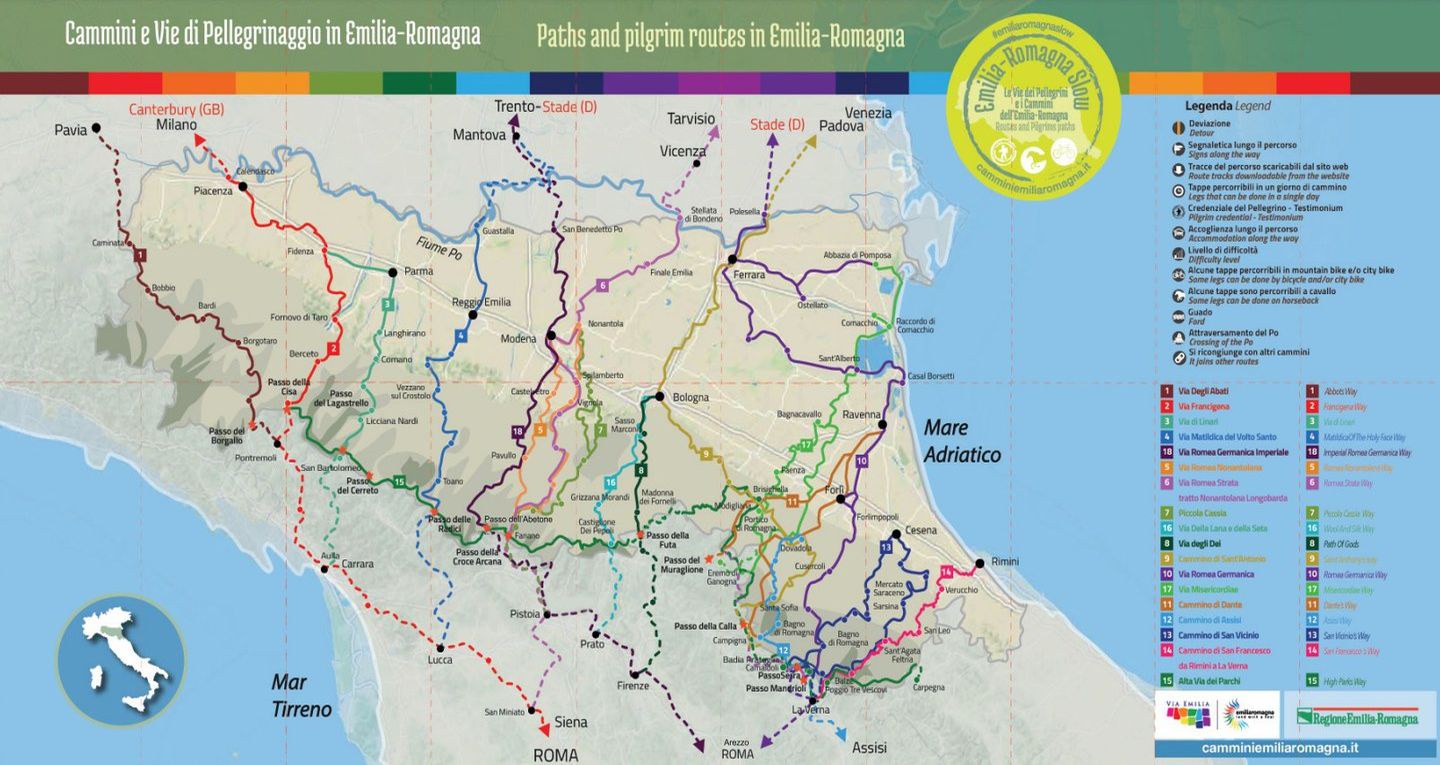 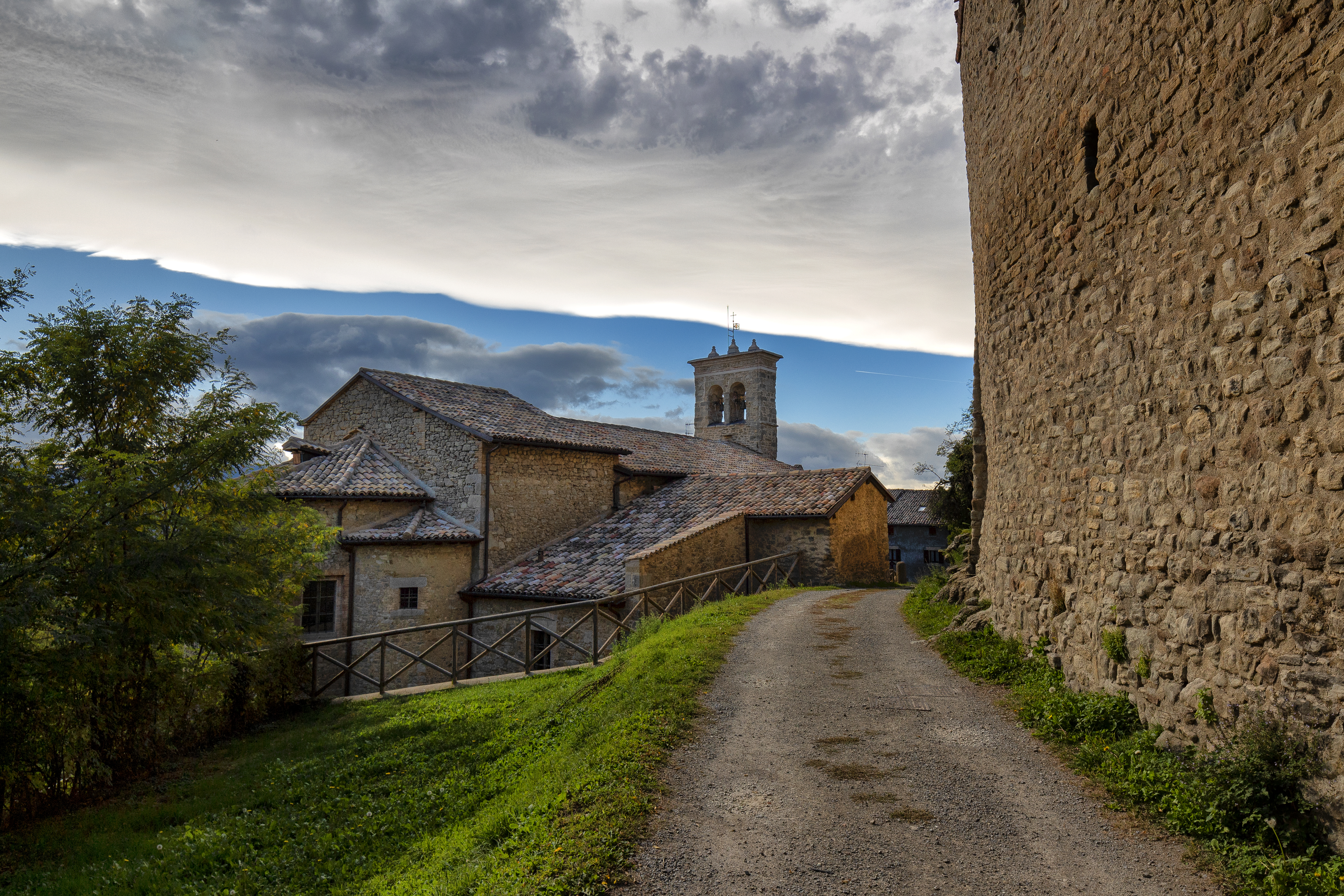 Romea Strata Lombard Nonantolana
The name Via Romea Strata was originally given to a series of ancient roads that reached the borders of Italy from Central Eastern Europe.
Because the road comprised several separate routes, it was usually divided into seven smaller paths that entered Emilia Romagna in Badia Polesine after crossing the Po River.
In the section that crosses Emilia-Romagna today, the Via Romea Strata is called the Romea Longobarda-Nonantolana because, for a long stretch, it follows the Via Romea Nonantolana, passing through such historic centers of religious pilgrimage as the Cathedral of Modena, the Nonantola Abbey, and the pilgrimage hostels in Fanano.
Once on the other side of the Apennines, the Via Romea Lombarda once more heads toward Pistoia and San Miniato in Tuscany, continuing south until it reaches the Via Francigena. 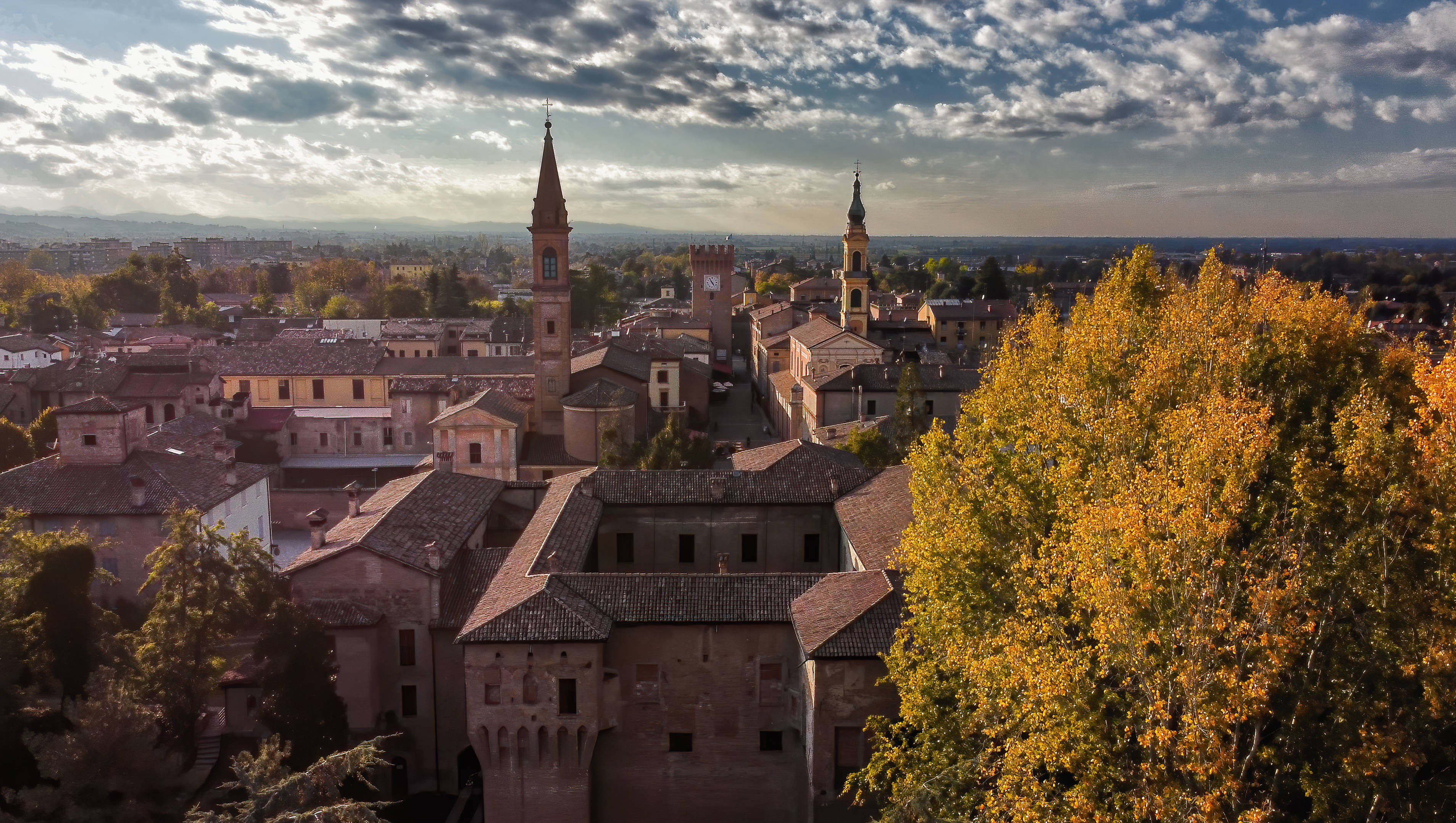 Piccola Cassia
The Piccola Cassia is an ancient Roman road to the north, following the route of the more famous Via Cassia to cross the mountains between Modena and Bologna.
The origins of the Piccola Cassia date to the Roman conquest and to the Empire’s expansion into the Po Valley, where new colonies were founded and a preexisting road system was revamped.
The route of the Piccola Cassia has remained unchanged and begins at the southern gate of the City of Modena. From there, it follows the ridge between the Panaro River and Samoggia River valleys toward the villages of Zocca and Castel d’Aiano, where it enters the Reno River Valley.
Once across the Apennines, the pilgrimage trails descend into Tuscany to cross the Ombrone River Valley to reach Pistoia, where they rejoins the Via Cassia on the way to Rome.
The pilgrimage routes described above are all part of the Emilia-Romagna Region’s CamminiEmiliaRomagna.it project.

Other Ancient Roads through the Modena Area

Via Vandelli
Via Vandelli is an ancient commercial and military road commissioned by Este Duke Francesco III and built in the mid-18th century to connect Modena (capital of the Este Duchy of the same name) and Massa. The abbot, engineer, geographer, and court mathematician, Domenico Vandelli, was charged with designing a new road system that would be technologically advanced for its time. He was given personal responsibility for directing the work, and Via Vandelli was later named in his honor. Construction began in 1738 and, by 1751, the road was considered complete. 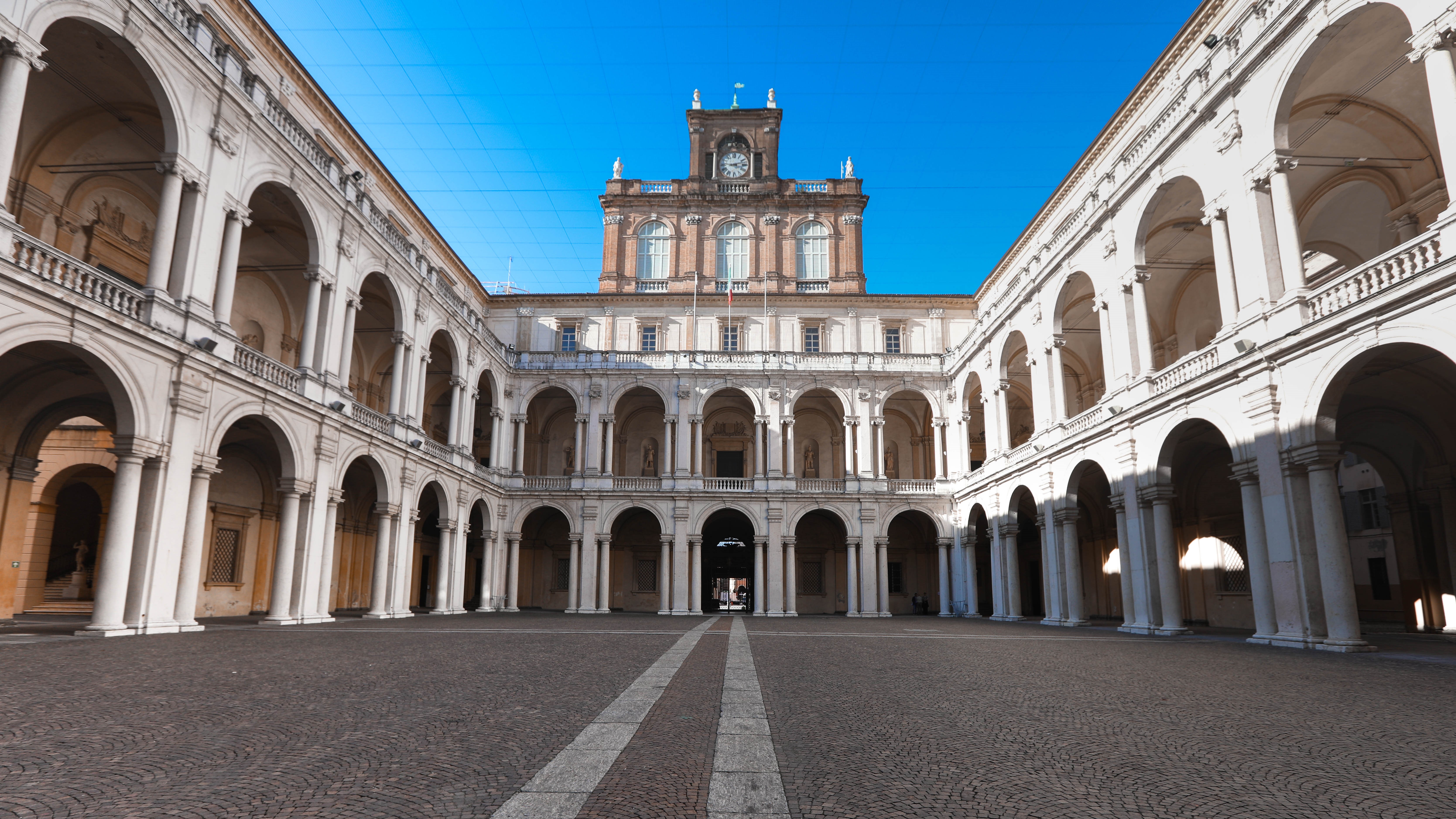 Via Bibulca
The Via Bibulca is an ancient Roman road designed to allow two oxen to pass side by side and, therefore, to be wide enough for carts. It began at the confluence of the Dolo River and the Dragone River and led from the Secchia River Valley to the Radici Pass (Passo delle Radici). During the Middle Ages, it became one of the main routes between Emilia and Tuscany and can still be driven today in the towns of Montefiorino and Frassinoro. The Via Bibulca’s history is tied to the many events that took place in the middle Secchia River Valley over history, an area that makes up the Secchia-Dolo-Dragone Rivers valley and river system. The road gained importance in the first half of the eighth century when the Lombards opened the Passo delle Radici to connect the Modenese mountain, hard won from the Byzantines, with their possessions in the Garfagnana. Major expansion of the Via Bibulca came at the end of the 11th century, starting with the foundation of the Benedictine Abbey of Frassinoro (1071) by Beatrice of Lorraine, mother of Matilde di Canossa. 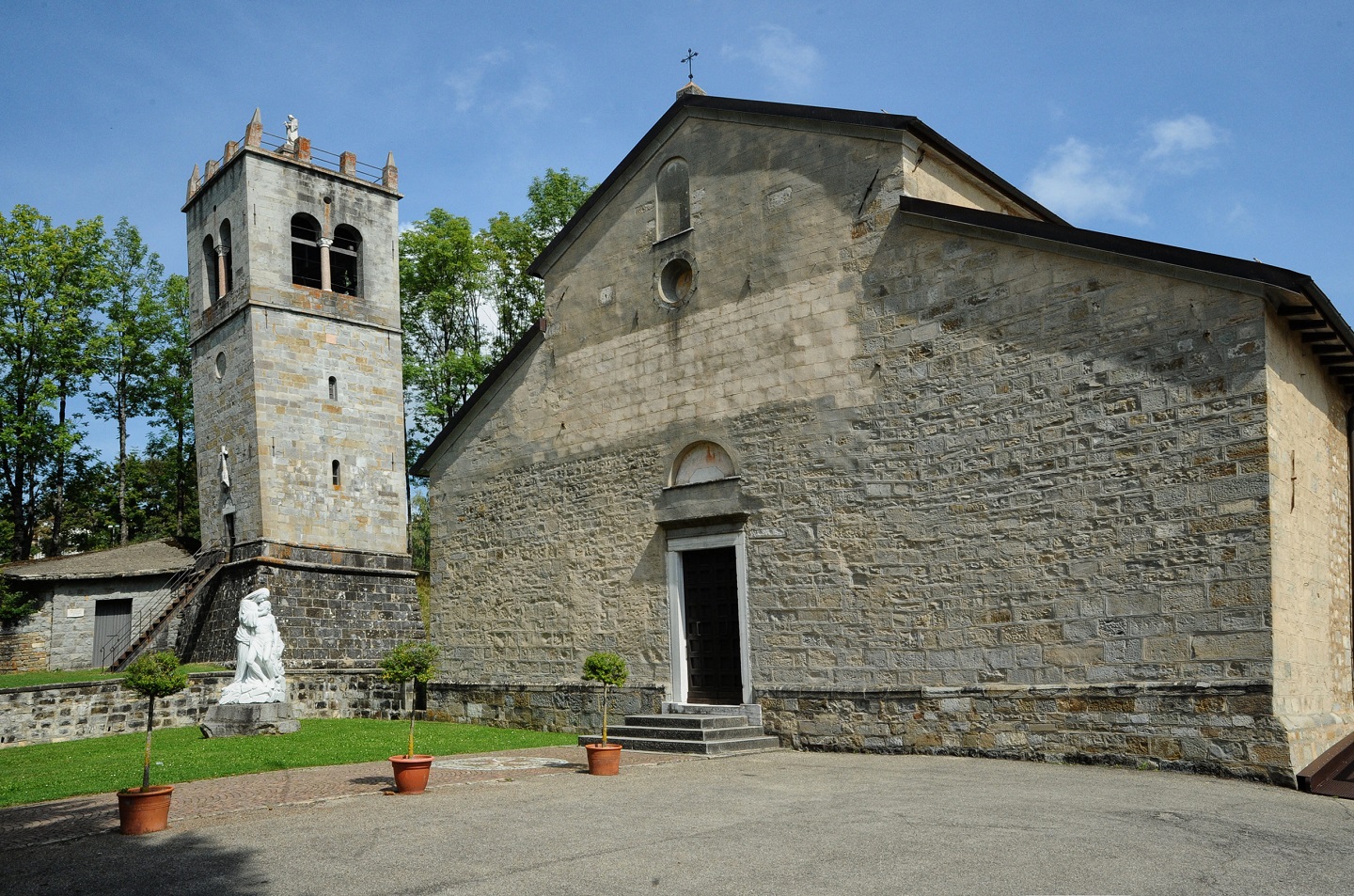