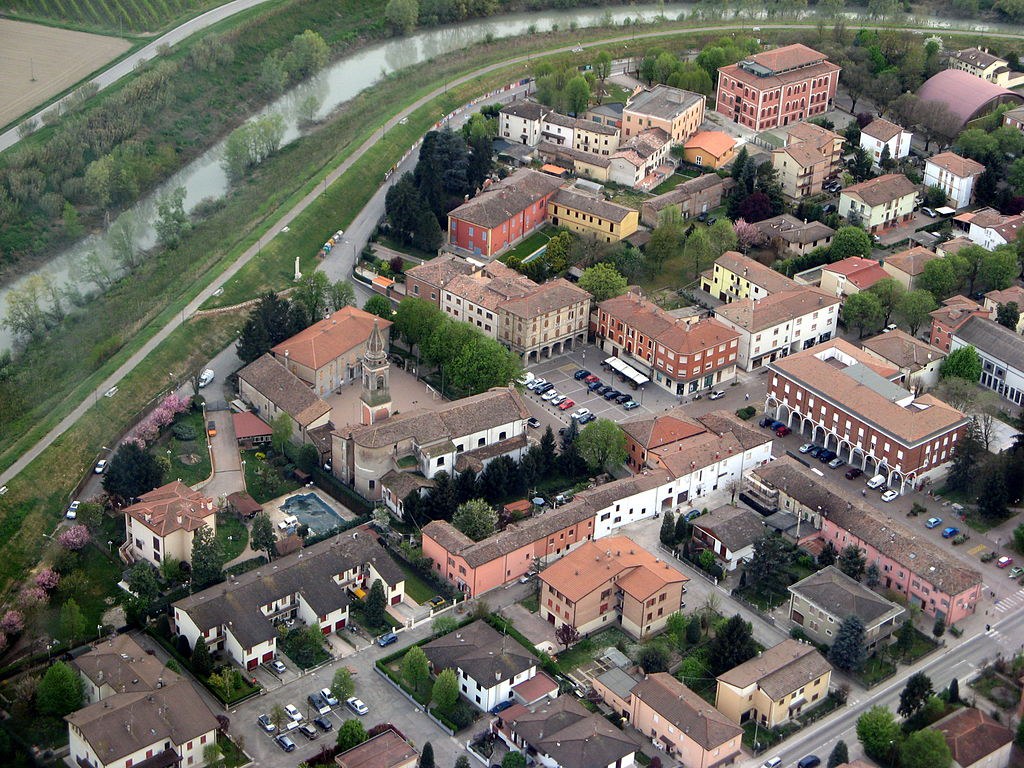 The town itself began to develop between the 14th and 15th centuries, following the creation of an inlet near Bomporto that forced the Panaro River to flow into the Naviglio Canal (likely completed in the early decades of the 1300s). This diversion project was intended to address the frequent flooding of the Panaro River and, at the same time, to increase the Naviglio Canal’s capacity so that it could be navigated even during periods of low water. During the 17th century, the town was elevated to the rank of county, a fiefdom of the Forni family, which held sway over the area until the end of the 18th century. Following a brief period of autonomy during the Napoleonic era, the town was absorbed into the nearby community of San Felice with the beginning of the reinstatement of ducal authority in Modena. In 1860, Camposanto once again acquired independence as a town in its own right.

Camposanto is a typical town of the northern part of Modena Province (called “Bassa” or “Lower” Modena because the area is largely below sea level). It was founded on the left bank of the Panaro River, where a long section of the river serves as a natural border with the Province of Bologna.

Camposanto’s artistic treasures include the parish church, dedicated to patron saint Bishop Nicolò Sandonnini, built in 1629, and the La Corte complex, a square-plan manor whose eastern side is graced by the beautiful Ferraresi Tower, today the site of the town’s vinegar production. In its current architecture and dimensions, the building dates to the 17th through the 18th centuries

A number of well-interconnected bike paths wind through the entire northern part of Modena Province. Travelers can reach Camposanto, for example, via a bike path that begins in Modena and passes through Bastiglia and Bomporto before ending in Camposanto.

The Saliceta Forest in Camposanto is an ancient wooded area that dates to 1149. Significant modifications that continued through the 1950s, however, drastically reduced the forest area, leaving today only small patches of growth which, in total, cover about eighty acres. Today, the Saliceta Forest is made up of segments of its original acreage and has become an area of ecological restoration organized by the Province of Modena for the development and protection of the natural environment and its biodiversity. Nearby, a number of agricultural outlets sell products that offer intriguing opportunities to sample local food and wine

WHERE WE ARE
Camposanto, MO, Italia