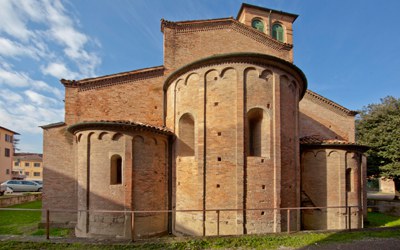 It was freed of its Baroque superstructures, but several of the interventions which followed were questionable, including the reconstruction of the facade in a style unseen elsewhere, and the raising of the central nave. Worthy of note are the elegant apses divided by pilaster strips connected at the top by arches, and lightened by splayed single-arched windows. The sides, marked off by buttresses, are decorated with an elaborate brick cornice composed of several horizontal bands.

The interior, its central nave and two side aisles divided by columns and piers, is austere and imposing. The sculptural decorations are quite interesting: the pier cornices are decorated with archaic braided and palmette motifs, while the capitals of the Corinthian-style columns are adorned with leaves, caulicoles and garlands. The concave profile of the abacus is characteristic.

The beauty of these capitals (which were partially remodelled during restoration work), has led some to attribute them to the Roman era. An interesting relief fragment dating from the 12th century is found on the wall near the right side entrance. The fragment was probably from the jamb of a portal, and depicts an angel with large wings and other figures. It is difficult to date the Basilica of San Cesario, given the complex variety of its elements, and the numerous revisions undergone through time. It seems that the building was erected in two separate periods: the apse and presbytery were built first, and the nave and aisles were added later. Some scholars feel that the oldest parts date back to the Roman and early medieval ages, while others date the entire construction to the first half of the 12th century.