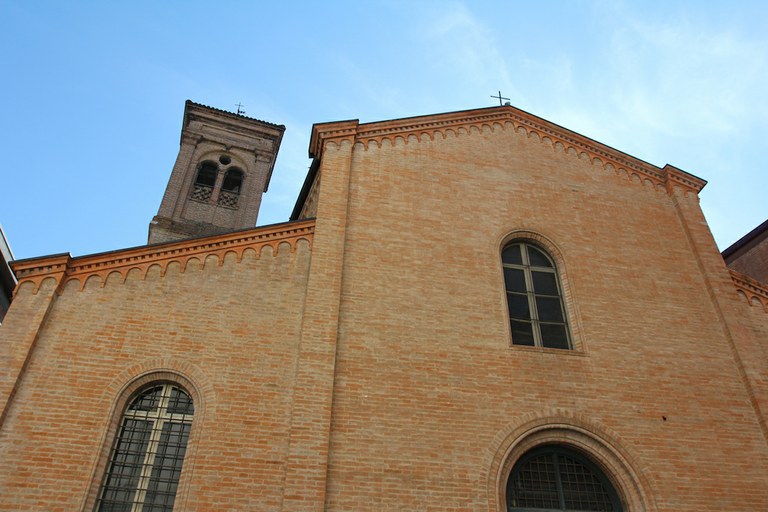 The church belongs to the Azienda Servizi alla Persona – Patronato Figli del Popolo e Fondazione San Paolo e San Geminiano, a social services organisation founded in 1998, by way of the conversion of the San Paolo provincial girls’ school and the San Geminiano girls’ orphanage. The building is loaned for use to the Municipality of Modena, to the Province and to the University of Modena and Reggio Emilia.

In 1486, the church was given to the nuns of “Nostra Signora della Misericordia”, which began extension work on their convent. The church preserves its Romanesque structure with three naves and tiered façade still visible on the outside. In 1603 the apses were demolished and the building was shortened by one whole bay, to make room for the inner church, used exclusively by the nuns of the closed order. In 1653 the nuns rebuilt the church according to a design by the architect Cristoforo Malagola, known as il Galaverna.

It was closed as a parish church in 1774 and to worship in 1798 by Napoleon, who used the convent as a barracks. The building was then used to store wood until 1816, when it was re-opened for worship at the behest of Duke Francis IV d'Austria-Este, while the convent was used as a school for poor girls, under the protection of the Duchess Maria Beatrice Vittoria di Savoia, the wife of Duke Francis IV d'Austria-Este. This was later transformed in 1859 into the San Paolo Provincial girls’ school. To rectify the street, the church façade was demolished in 1890 and rebuilt in alignment with the other buildings, according to a design by Alfonso Parenti.

The simple façade is vertically articulated by two pilasters which divide it into three sections corresponding to the three interior naves. The upper central part has a tall, narrow window with a semicircular top, with a portal below. Two similar windows also open up the side sections. The church has been deconsecrated. The San Paolo complex, following painstaking restoration, has enabled the city to recover places of remarkable historical and architectural value. In the west wing between Via Selmi and the Giardino delle Caselle, six thousand square metres are home to the San Paolo crèche and the Boschi kindergarten. Here there is also Cubec, Mirella Freni’s Belcanto singing academy, an area for educational and cultural activities, a coffee bar, a restaurant and some shops.

In the east wing, which stands around the Cortile del Leccio, are university spaces dedicated to the Law Faculty library and the Centre for Documentation and EU Research.

The Church is currently closed.