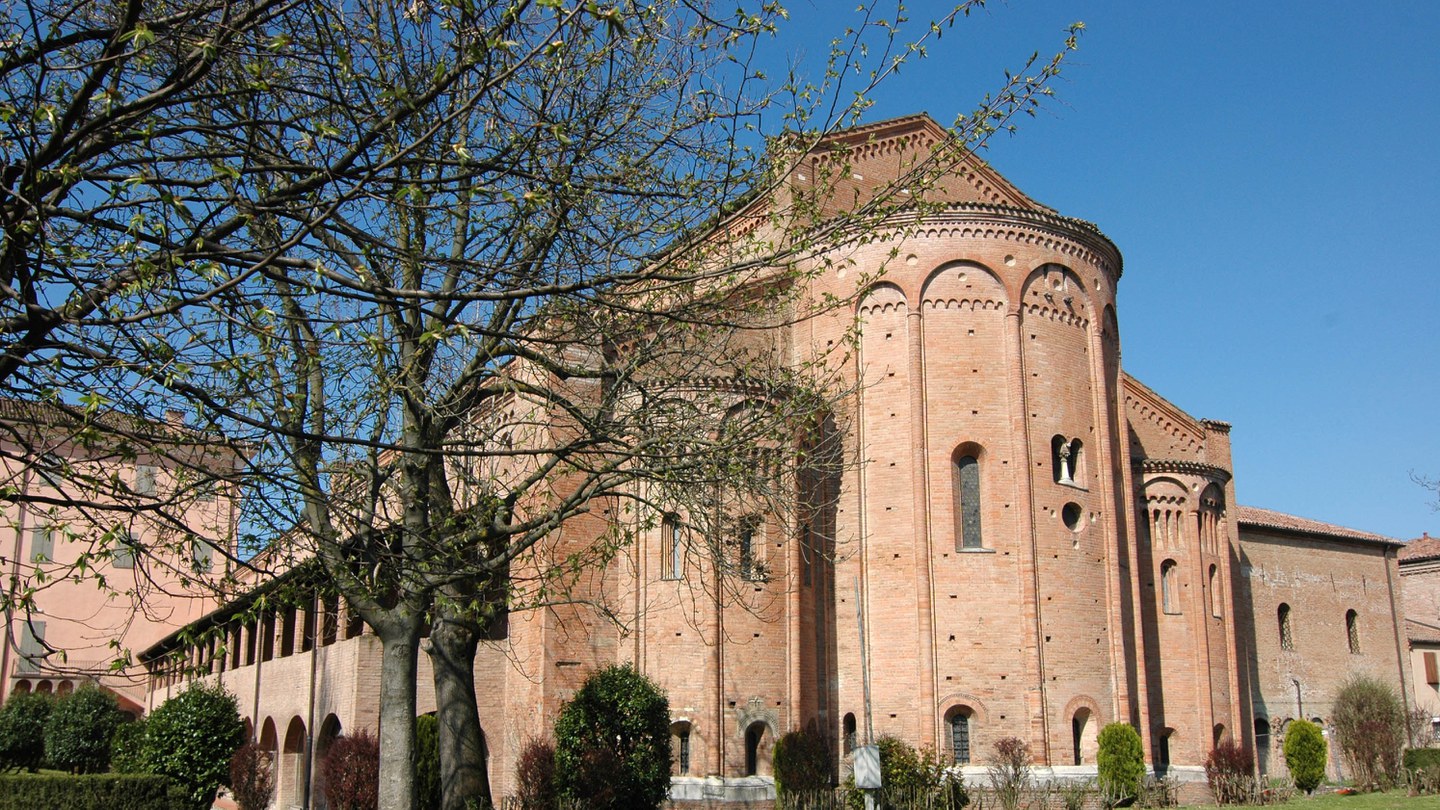 The Abbey, a relevant religious and cultural center of Medieval Europe, masterpiece of Emilian Romanesque architecture, is an extraordinary testimony of 1300 years of faith, history, and art. Formerly a Benedictine and later a Cistercian monastery, founded in 752 by Saint Anselm, brother-in-law of the Lombard king Aistulf, it is dedicated to Pope Saint Silvester I and preserves his relics.
The splendid Basilica, with its magnificent portal carved by Wiligelmo and his school, and the forest of columns that supports the crypt, is today the co-cathedral Church of the Archdiocese of Modena-Nonantola.
Do not miss a visit to the Benedictine and Diocesan Museum, where the Sacred Treasure of the Abbey is exhibited, with its precious objects and reliquaries, extraordinary fabrics, parchments, and illuminated manuscripts of the ancient monastic scriptorium, with the outstanding Gospel of Matilda of Canossa, and rare imperial documents, including those with the monogram of Charlemagne and other Medieval kings and emperors.

A place of historical importance

When the Lombards settled in the area of Modena in 752, King Aistulf allocated the land defined as the locum Nonantulae to his brother-in-law Anselm, who built a Benedictine monastery here, which became one of the most renowned monasteries in Europe. The cenobium was a royal abbey built on what until the year before had been the border between the Kingdom of the Lombards and the Byzantine Exarchate, and was meant to unify and organise the territory. In the structure of the Holy Roman Empire, Nonantola was part of the network of imperial monasteries built or reorganised as part of the reform called for by Emperor Charlemagne. Until the year 1000, the Abbey was run by abbots appointed by sovereign rulers, who turned it into one of the main centres of power and of cultural dissemination. Today, this ancient past has left a unique and extremely valuable legacy: more than 4,500 parchments from the Abbey Archives, 131 of which date back to before the year 1000. The most famous ones, bearing the “signatures” of Charlemagne, Matilda of Canossa, Frederick Barbarossa and of other key figures in European history, can be seen in the rooms of the Benedictine and Diocesan Museum. The Archive itself is rather unique: it was established when the monastery was founded and the documents preserved here have never left its premises

A place to develop and exchange knowledge, as well as a point of contact between different cultures

Since the 8th century, the monks, following the precepts of the Rule of Saint Benedict, focused on culture and knowledge, taking care of their library – whose main original nucleus was brought to Nonantola by Anselm after he was exiled to Montecassino – and by documenting, over the centuries, the volumes through inventories that have been preserved to this day. Next to the library, a scriptorium was set up, where hundreds of manuscripts were produced: not only religious codices but also texts with transcriptions by Latin authors, which have been handed down to us thanks to this form of mediation. In a world where few were able to read and write, monasteries became cultural islands where a new type of calligraphy, i.e. the Carolingian minuscule, was created in order to overcome the fragmentation of the different forms of handwriting used. In the Diocesan Museum, three illuminated manuscripts about monastic activity in the scriptorium can be admired: the Gospels of Matilda of Canossa (11th-12th centuries), the Gradual or Cantatorium, an ancient musical manuscript containing Gregorian melodies (11th-12th centuries), and the Acta Sanctorum (11th-13th centuries), which bears witness to the worship of the saints in the Abbey. Nonantola was also a place where experiences and distant and near cultures were exchanged and merged, in both artistic and religious spheres. This is still evident today in the works of the Sacred Treasure, which show Byzantine and Oriental stylistic influences, and in the so-called “prayer fellowships” with other great Benedictine monasteries in the Germanic area.

A place whose name is linked to historical figures

Throughout its millenary history, the Abbey had contacts with well-known figures: Emperor Charlemagne, who generously donated land and rights to the cenobium. Three of his diplomas are kept in the Abbey Archives: that of 780, with which Charlemagne grants Anselm two churches with their appurtenances in the Modena area, is the oldest original document preserved. The diploma of 797, with which Charlesmagne donates properties to Anselm in the areas of Verona and Vicenza, bears his monogram. The placitum of 801, which resolved a dispute over land and property near Lizzano in the area of Bologna, cites Charlesmagne as the imperator. Lothair I stayed in the monastery as evidenced by the parchment with his seal dated 837; Charles the Fat and Pope Marino met here in 883; Pope Gregory VII celebrated the rites of Easter here in 1077; Matilda of Canossa donated many properties to the monks and was a guest at the monastery; Cardinal Giuliano Della Rovere was its commendatory abbot before becoming pope with the name of Julius II; Saint Charles Borromeo, commendatory abbot from 1560 to 1566, founded, immediately after the Council of Trent, the Seminary, one of the first in Italy and active until 1972.

San Silvestro Abbey opens every day from 9.00 am to 5.30 pm. Visits are not allowed during celebrations.

Guided tours can be book, sending an email to info@abbazianonantola.it.

Accessibility for people with disabilities: please note that for people using wheelchairs, at the moment the visit is possible only in the entrance aisle, pending the realization of a project that involves the removal of architectural barriers. It's therefore not possible to access the presbytery and the crypt. There are no difficulties in visiting the museum where there are no architectural barriers.