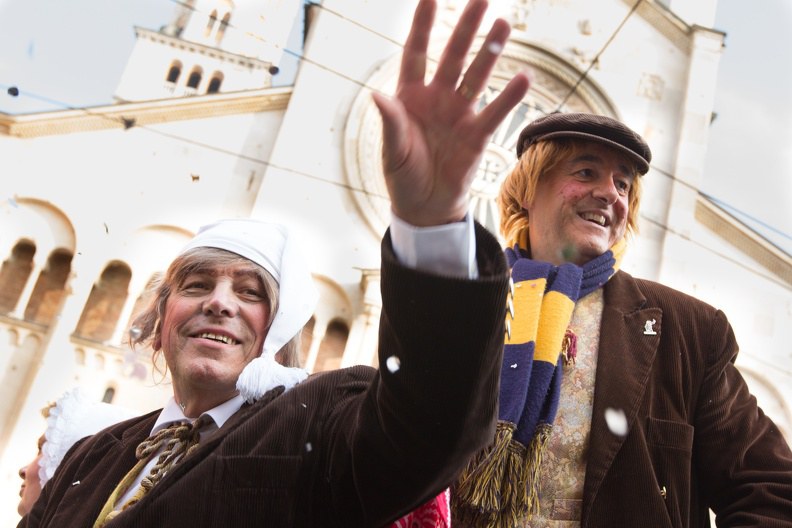 Sandrone and the Pavironica familiy
Sandrone, the traditional Commedia dell'Arte figure of Modena, represents the typical peasant of ancient times: he is a rough but sly and daring peasant. He is the spokesman of the humblest people, eternally mistreated and hungry, but astute and always seeking strategies to make both ends meet.
In 1840 he "takes a bride"; that is the figure of his wife Pulonia appears and soon the family was completed with their son Sgorghiguelo.

Shrove Thursday
Each year the arrival of Carnival or Mardi Gras to Modena means the arrival of the Pavironica family on Shrove Thursday.
Preceded by a carnivalesque fanfare and followed by other provincial, regional and national characters, Sandrone, Pulonia and Sgroghiguelo exit the railway station, feigning the arrival of the legendary Bosco di Sotto, this trio's current residence.
Escorted by two coachmen and two pages dressed in XVIII century costumes, our figures parade through the streets of the town in an XIX century carriage drawn by two horses, surrounded by the spectators who applaud them as the last symbol of Modenese folklore.
Once the official visits (to the religious, civil and military authorities) have been completed, Sandrone and his family finally appear at the balcony of the city hall, beginning his "rambling talk" in the dialect of Modena on the most important events that occurred in the city over the last year.
He criticises the "ministrador" (city administrator), marking situations and needs, putting his finger in some of the city's sore points and finally inviting all to peace and to work to improve the city.
During the five days that follow, that is until Shrove Tuesday, the Pavironica Family visits schools, nurseries, hospitals bringing a good word and a note of cheer.