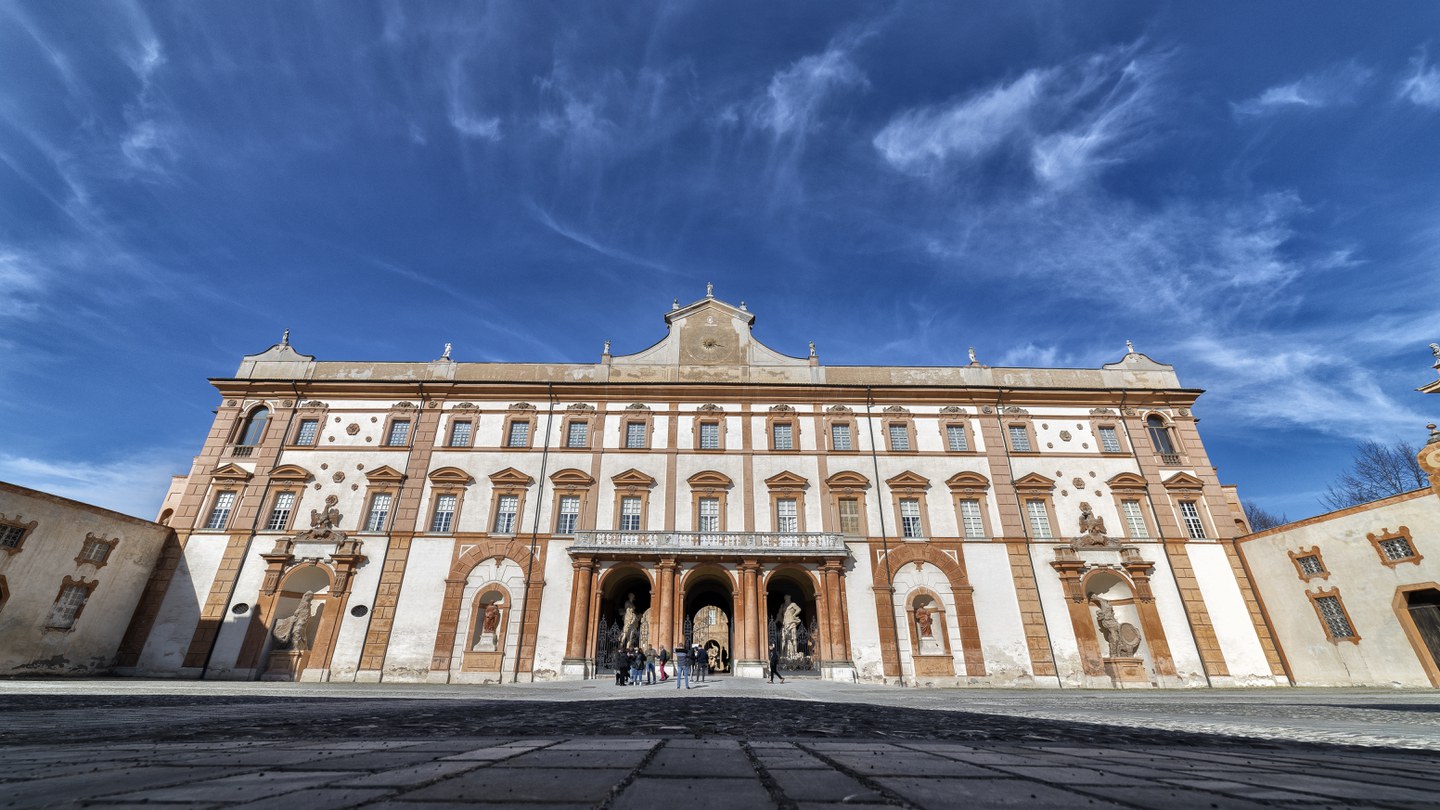 The present day appearance of the palace began to take shape in 1634, when the old, solid castle was transformed into a Ducal residence, a prestigious place to be used for summer holidays and as an official court venue

The renovation and decoration of the palace was commissioned by Francesco I d’Este, the duke who, following the loss of Ferrara in 1598, created a new image for Modena as capital of the state and brought the Este dukedom of Modena and Reggio Emilia back into the European political scene.

The rooms were painted by a team of extraordinary artists who masterfully interpreted the ambitious spirit and artistic patronage of Francesco I, including French man Jean Boulanger, the official painter of the court of Este and some of Bologna’s leading quadraturisti, or illusionistic mural painters, such as Angelo Michele Colonna and Agostino Mitelli, and a large number of skilled decorators and moulders, including Luca Colombi and Lattanzio Maschio. On the walls and ceilings of the rooms, allegorical subjects are interspersed with episodes from the history of the Este family, mythological heroes meet those from classic and chivalric literature, all combined to express the inspiring agenda of Este nobility and of "good government”. The depictions are contained inside “quadrature”: one of the most successful forms of illusionistic painting.

A sophisticated foreshortening effect and an unexpected virtual multiplication of spaces show just how much passion there was to artificially imitate materials and nature through painting.

Working on the large complex of the Palace, which also includes the palatine chapel dedicated to Saint Francis and the magnificent Peschiera, was the Roman architect Bartolomeo Avanzini, inspired by the famous Gian Lorenzo Bernini in the structural renovation and decorative Baroque solutions, as well as renowned set designers, particularly the Reggio-born Gaspare Vigarani, also active in the court of Louis XIV.

The intense restoration of the palace as well as its use as a museum today allows for the decorated area to be fully exploited. The main floor, or piano nobile, is accessed by way of the Grand Staircase of Honour and the Ducal Apartments, the rooms originally destined for the family members, are open to visitors: the Gallery of Bacchus, The Duke’s Apartment, the Hall of the Guards, the stuccoed Apartment, the Duchess’ Apartment, and, as of this year, also the apartment of Orlando, the Princesses and of the Secchia.

In the thirteen new rooms that complete the itinerary on the piano nobile of the Ducal Palace of Sassuolo, restored between 2009 and 2012 with funding from the Ministry of Cultural Heritage and Activities and Tourism, and in a part of the Ducal Apartments, 374 artworks (311 paintings and 63 sculptures) were put on display between 2014 and 2015, taken from the store rooms of the Galleria Estense di Modena, almost all of which had never been publically exhibited before.

The new exhibition rooms form part of the Orlando, Princesses’ and the Secchia apartments, from whose windows, which overlook the Ducal Gardens, one can admire splendid views that re-evoke the age-old relationship between the Ducal Palace and its natural setting.

The artworks on display vary in quality and state of preservation, with many still to be ascribed, dated or sourced. They include some important works, executed by famous artists and with definite origins, and others of modest quality and of which no precise information is known. Their public display in new settings, which guarantee the best conservation conditions, will mean they can not only be admired, but also stimulate new study and research.

It is not, in fact, a display based on strict museographic and historical-artistic principles but on a sort of open store room idea: a study collection arranged according to general criteria that favour the visibility and study of the works, rather than consistent grouping by schools, style or chronology, or artistic quality and perfect state of conservation, as would occur in the rooms of a real museum.

However, this exhibition recalls old princely picture collections (which could also be found in the Este residences), by recreating juxtapositions according to size, proportion and symmetry, and by suggesting similarities between subject matter and artistic styles. The 311 paintings are distributed throughout the thirteen rooms in line with a chronological itinerary that spans the 16th and the 19th century, though not in perfect order, given the need to decorate the walls also according to balance and the harmonious relationship between the various works. Painters include Domenico Carnevali, Lavinia Fontana, Giacomo Cavedone, Elisabetta Sirani, Francesco Stringa, Benedetto Gennari, Sisto Badalocchio, Bernardo Strozzi, Giovan Battista Crespi, Giacomo Zoboli, Francesco Vellani and Adeodato Malatesta.

The arrangement of the sculptures basically follows a similar chronological order, from Roman antiquity to the 19th century, but the artworks are also grouped with their subject matter in mind. The interest of the Este family, from the Renaissance up to the 19th century, in classical antiquity explains the presence of many busts of emperors or similar, to celebrate the dynasty, as well as other secular (playful divinities such as Venus with cupids or Bacchus) or mythological (like Apollo and Marsyas, or Ariadne and Psyche) subjects.

Groups (maximum number 25 people) are allowed as long as safe distances are respected; group reservations can be made through the Urp of the Municipality of Sassuolo (0536 880801) of the Ducal Palace’s ticket office (389 2673365).

WHERE WE ARE
Piazzale della Rosa, 41049 Sassuolo, Modena, Italia