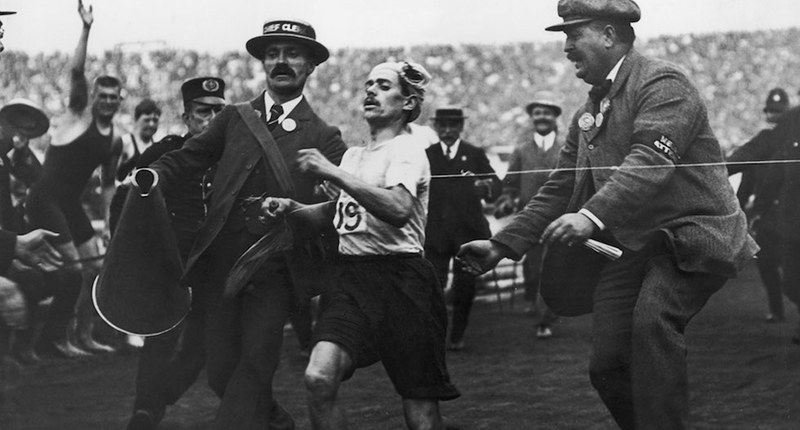 At the age of 14, Dorando was taken on as a baker’s delivery boy and apprentice. In 1903, he enrolled with the La Patria gymnastic sports club. His first contact with competitive sport is legendary: standing at the shop door, Dorando saw the Italian long-distance champion and record holder Pericle Pagliani run past, on a solo training session. Dorando rolled his apron up into his belt and followed the champion like a shadow to the finishing line.

He made his official debut a few days later, in October, in Bologna, coming second behind Aduo Fava in a 3-kilometre race. That was the first of a series of long-distance races in Italy and other countries by Dorando, who proved himself on various occasions in Rome, Milan, Turin, Paris, Chicago, New York, San Francisco, São Paulo, Buenos Aires, Philadelphia, Saint Louis, Toronto, Buffalo, Vancouver, Pittsburgh and Indianapolis.

In 1909 he married Teresa Dondi from Carpi and moved to Sanremo, where he opened a car rental agency on 26 November 1923. Dorando died on7 February 1942, in this town in Liguria and is buried here.
Dorando Pietri was an exceptional level champion.
What happened on 24 July 1908 at the London Olympic Games, the unfortunate epilogue to the marathon that saw him as the absolute main player, his falls in the last few metres of the race, the uproar caused by his disqualification, the generous, enthusiastic gesture, going beyond any protocol of Queen Alexandra, who had the court jewellers work all night so that she could personally present this Italian athlete with a cup, jealously guarded in a safe deposit box at the Cassa di Risparmio di Carpi bank, the article defending the runner in the Daily Mail written by the famous Arthur Conan Doyle – all this has made Dorando an immortal figure in the world.

The organising committee of the Italian Marathon set up a Dorando Pietri Committee, which in 2008 was responsible for the Centenary Celebrations.