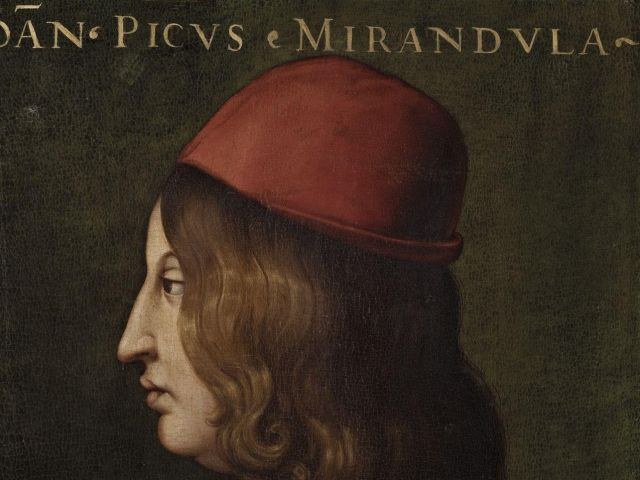 Known as Pico della Mirandola, this important historical celebrity was born in 1463. Famous for his proverbial memory, as a youth he dedicated himself in particular to the study of philosophy and theology.

Attending leading cultural gatherings of the Renaissance encouraged his eclectic and universalistic vision of the world, which embraced various philosophies, ancient religions and Christian theology. After a period in certain French cities, in 1487 he was arrested in Lyons by wish of Pope Innocence III. A disdain expressed internationally and the intercession of Lorenzo the Magnificent led to him being freed and subsequently transferred to Florence.

Pico della Mirandola died in 1494, some believe from poisoning, after completing his major works. On his tomb stone in the Church of San Marco in Firenze, is an epigraph by the poet Ercole Strozzi: Here lies Giovanni Mirandola. The rest is known by the Tagus, the Ganges and perhaps also the Antipodes.

He was a major thinker and wrote important works about the dignity of Man and free will
Pico della Mirandola's prodigious memory has remained literally proverbial: it is said that he knew by heart many of the works on which his encyclopaedic culture was based and could recite the Divine Comedy backwards, beginning with the last verse - a feat which, it seems, he could repeat with any poem immediately after reading it.

Giovanni Pico was born on 24 February 1463. A precocious vocation for studies encouraged him in 1477 to attend Bologna University where he studied canonical law.
Pico was not particularly interested in these teachings. After the death of his mother, he moved first to Ferrara and then to Padua, an important centre for philosophical studies. In the first months of 1484 he settled in Florence, a rich and animated cultural environment. Between July 1485 and March 1486, the Philosopher lived in Paris. On his return to Italy, Pico intensified his studies of Hebrew, Chaldaic and Cabbalist texts. Pico's writings soon aroused criticism, unfavourable reactions and accusations. On 5 August, Innocent VIII issued another Brief condemning Pico's dissertations and banning their reading or printing.
Pico then decided to retreat from Rome. The Pope in the meantime spread the news of the condemnation of Giovanni's theses and ordered his arrest. Pico was arrested near Lyons in France in 1488 but his imprisonment lasted only one month. In the Summer of 1488, Pico settled near Florence, on the hillsides around Fiesole, deeply troubled by the condemnation for heresy promulgated by the Church and applied himself with great fervour to theological studies. On 18 June 1493, Pope Alexander VI, on his succession to Innocent VIII, issued another Bull which absolved Pico from every censorship and taint of heresy.
Giovanni Pico then intensified his religious meditation and isolated detachment in the Florentine convent of St. Mark, where he died on 17 November1494.
The International "Giovanni Pico della Mirandola" Culture Centre was founded in 1994. Its main aims are research and the conservation in its own head offices of information, documentation and material concerning Giovanni and Gianfrancesco Pico, the history of their city, the publication of texts, studies and research, the valorisation and consolidation of research and studies of an historic-artistic-philosophical character.

For more information and the cultural proposals of the Centre: http://www.picodellamirandola.it