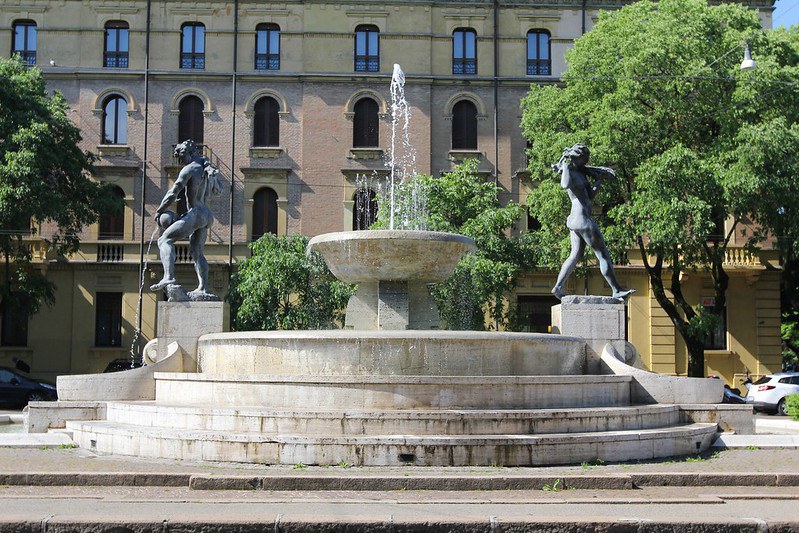 Despite living in Florence and Milan, the artist never lost contact with Modena and actively took part in cultural events, as his many monumental artworks around the city bear witness.

The recommended starting point for an itinerary through the artist’s many works in the old city centre is the “Giuseppe Graziosi”Gipsoteca plaster castgallery in Palazzo dei Musei, which is home to a large collection of sculptures, paintings and engravings representing the main stages of the sculptor’s artistic career.

The subsequent parts of the itinerary touch on Graziosi’s mature years and feature a series of fountains, destined on the one hand to enhance major urban developments in the old city centre and on the other to celebrate the construction of Modena’s aqueduct. The itinerary continues into Piazzetta San Giacomo with the Fountain of the Nymphof 1926, originally situated next to the Sports Centre, while nearby is the Fountain of Saint Francis of 1938 in which the Saint is captured in the act of reciting the Canticle of the Sun. Next on route is the monumental Fountain of the Two Rivers, the artist’s most prestigious work, destined to decorate the east entrance to the city with bronzes representing the Secchia and Panaro rivers. The itinerary continues into Piazza Roma where, on the balustrade of Palazzo Ducale, Graziosi executed the divinities Venus, Bacchus, Ceres and Vulcan in the 1920s at the behest of the Ministry of War. In the nearby Via Belle Arti, inside the historical seat of the Venturi Art Institute, is the Statues Gallery with its vast and varied collection of plaster casts, which Graziosi also studied before moving to Florence, Rome and Paris.

Inside the cathedral, on the altar of the Most Blessed Sacrament in the presbytery is the terracotta statue of the Redeemer. Nearby, inside the Palazzo Comunale in Piazza Grande, the visitor can discover two less-known works by the artist: the bronze bust of MayorLuigi Albinelli and the large painting Resting in the fields. Moving on from Piazza Grande to Piazza XX Settembre, there is “Putto with Goose”, a copy of the original kept in the “Giuseppe Graziosi” Gipsoteca plaster cast gallery.

The itinerary ends at the centre of the Indoor Market in Via Albinelli, with the artist’s fountain Girl with Basket of Fruit, created to meet the sanitary requirements of the new covered market, and can be extended to take in San Cataldo Cemetery, home to some of the most significant works of Graziosi’s prolific career, including the famous Lamentation over the Dead Christ.

For the cross-media itinerary