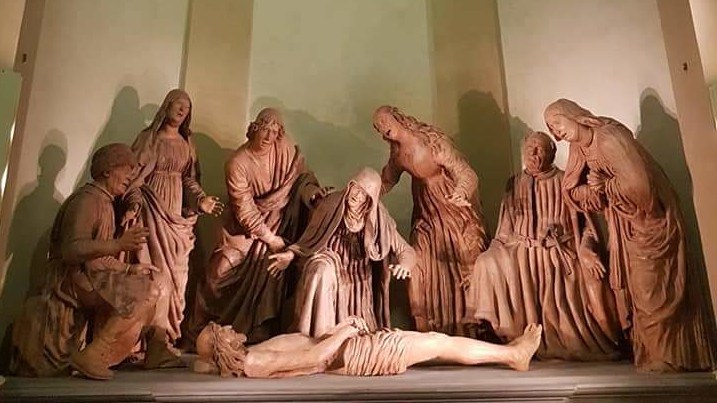 Using markedly popular style forms, with great pathos and immediate expression, in the years from 1475 to 1490 he produced a large number of these groups of sculptures and one masterful example can be found in the church of San Giovanni Battista.
Mazzoni managed to meticulously capture details in his sculpted figures, giving form to sentiments according to notions that drew on observation of everyday life. His aim being to help the faithful to relate to characters in the gospel, depicted with markedly popular pathos, the theme of the Lamentation was particularly dear to him. Another great example of his art is the Nativity Scene, today in the crypt of Modena Cathedral (also known as the Madonna feeding the Child because of the familiar gesture of the awkward serving woman blowing on a bowl to cool down the food to the right temperature before giving it to the baby).

In 1491, Mazzoni was called to Naples, to the Aragon court of Ferdinand I, for whom he made a bust in bronze (today in the Capodimonte Museum).
Again in Naples he received approval for another beautiful Lamentation, which today can be admired in the church of Sant'Anna dei Lombardi. Production of the Lamentation in Naples is also mentioned by Vasari.
On his way through Naples, King Charles VIII of France met Mazzoni and requested his presence in Paris.
He worked with Fra Giocondo di Verona in Château d’Amboise, earning esteem and admiration. On the death of Charles VIII, he was commissioned to make a tomb for the king in the basilica of Saint Denis (in enamelled bronze surrounded by statues of angels and the virtues in mourning), which was destroyed during sacking of the royal tombs during the French Revolution.

After a short period back in Italy, in 1507 he was once returned to France at the services of Louis XII and working at the Château de Blois he produced two statues of the King. He returned to Modena in 1516 and died in his home city on 13 September 1518.

Works in Modena:
-"Lamentation" in the church of San Giovanni Battista (at the moment by appointment only)
-"Madonna feeding the child" in the crypt of the Cathedral
-"Head of an Old Man" in the Estense Gallery