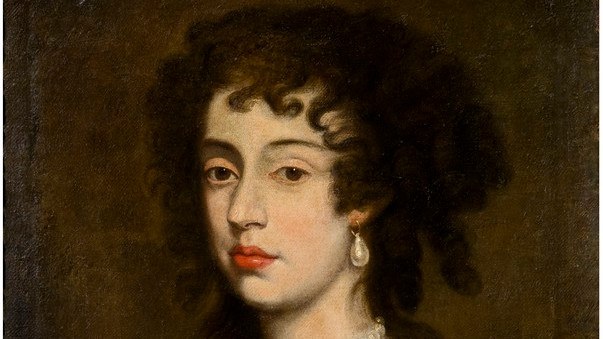 The young, God-fearing and intimated Duchess Maria Beatrice was hardly in a position to withstand the pressure exerted by Pope Clement X. Maria Beatrice had no other choice than to accept this arranged marriage, which was celebrated by proxy on 30 September 1673
Next 5 October, when she was only fifteen years old, she travelled to her new homeland to meet her husband. While James was enchanted by the grace and beauty of Maria Beatrice, this positive impression was by no means reciprocal. He was much older and certainly by no means handsome.

Until the death of Charles II - whose natural heir was James II - Maria Beatrice's life at court was very harsh: she was despised by the ladies of the court who nicknamed her "the daughter of the Pope", her husband was unfaithful and four of her children died. Despite all this, Maria Beatrice enlivened a literary salon at the Court of St. James and even managed to establish a fine relationship with King Charles II.

Charles II died in February 1685: James and Maria Beatrice became King and Queen of England. Yet the English Protestants could not accept a Catholic king and queen. The Stuarts were then ousted by the Glorious Revolution. .
Maria Beatrice and James II were forced into exile and settled in St. Germain en Laye, near Paris. Even in exile, Maria Beatrice maintained her royal behaviour.
On the death of James II in 1701, she became the regent for her son James Francis Edward who was acknowledged by the Sun King with the title of "James III": Maria Beatrice strenuously defended the rights of her son and continuously spurred him to continue his father's efforts to return a Stuart to the throne of England. James III was offered the throne provided that he became a protestant, even if only in formal terms, yet he disdainfully rejected this proposal.
Maria Beatrice, the last Catholic Queen of England, is remembered by the English as "Mary of Modena"; she died on 7 May 1718 and was buried next to her husband.