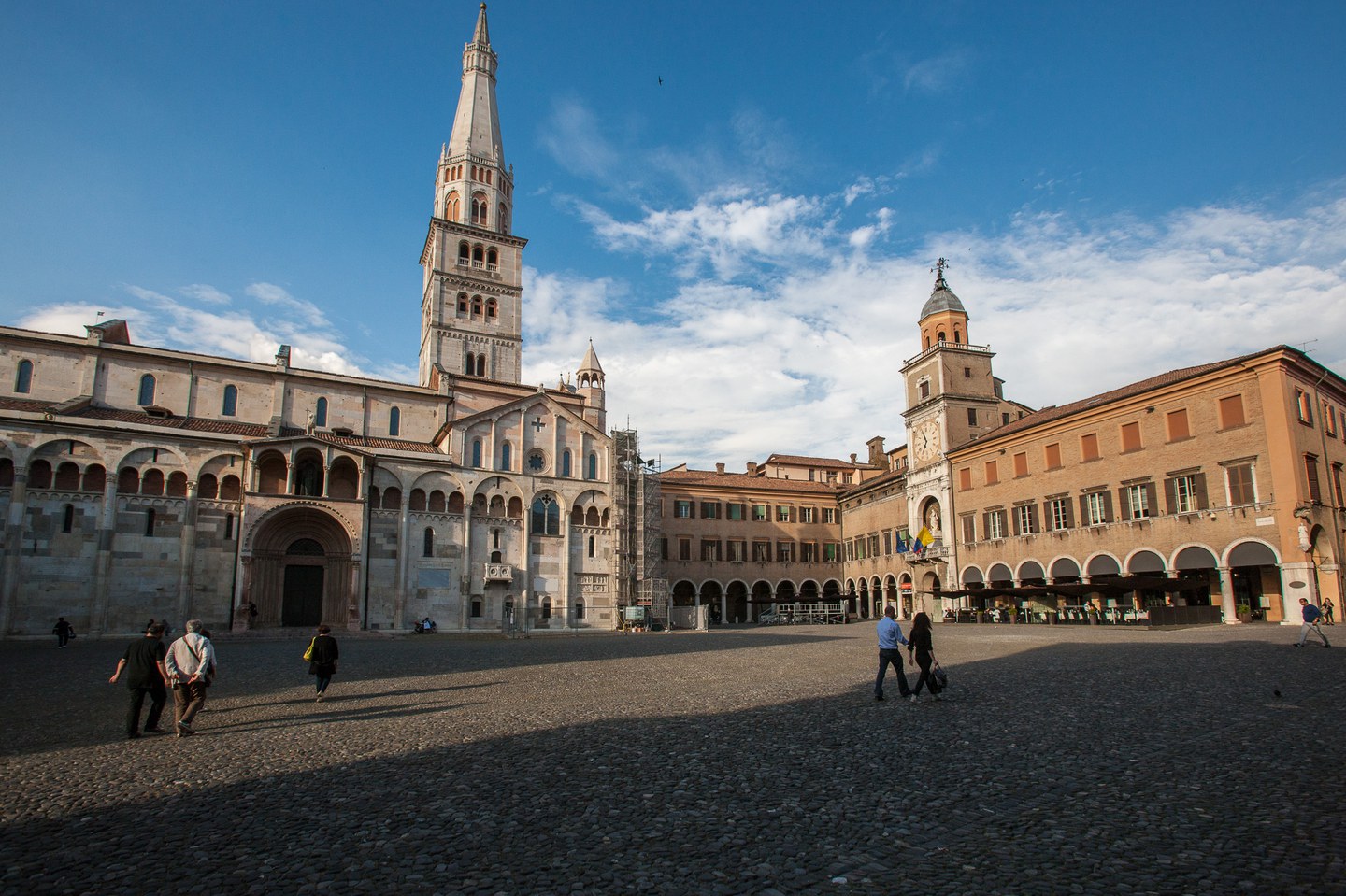 Set against the magnificent backdrop of the Ghirlandina belltower, the airy arches of Palazzo Comunale, administration offices and in the past also used as judiciary and criminal courts, and the cathedral, this space used to be strongly felt as belonging to the citizens, to the extent that statutes often prohibited eating or dancing there.

The Piazza was mainly the exclusive marketplace.It was the community that set the time and place for trading and location of the stalls in the square, mobile, temporary structures that on Saturdays and others days had to be laid out in long parallel rows.This aspect of commerce was probably linked to the statue of the Bonissima, which today looks down from the corner of Palazzo Comunale.
The Piazza, the market, the shops under the arches of Palazzo Comunale were much more than a simple trading place.They were somewhere to meet, to chat about goings-on in the city, to exchange opinions on political, religious and moral facts.

Justice was also administered in the square, usually on Saturday to coincide with the market.The terrible spectacle of justice could be seen in the Piazza with use of the gallows, the beheading block, instruments of torture, the Pietra Ringadora or stone table onto which anonymous cadavers were laid for identification, found under the arches or fished out of the canals or brought down from the noose hanging from the Palazzo. The Piazza was therefore where power was communicated, celebrated and reinforced and also where it showed the terrible, sinister, spectacular side of the course of justice.

It was also the stage for solemn religious processions which then continued through the city's main streets.The Municipal Council itself used to organise, with great participation by the people, penitential processions, holy performances and numerous festivals in honour of the Patron Saint Geminianius. These occasions often alternated the sacred with the profane, at times overlapping.

Masked parties and horseback jousting provided entertainment in the square during Carnival or on other joyous occasions and became one with the fairs.The opening of the festivities was announced to the population by a colossal mask (the mascherone) which was lowered from the top of Palazzo Comunale.This period of the year saw the organisation of tournaments, processions with carriages bearing ladies and gentlemen and decorated floats, alongside stalls selling all kinds of wares there were also stages set up for acrobats and charlatans promising miraculous remedies.

The Piazza was also where huge bonfires were lit to celebrate joyous events involving the whole city, such as the birth of princes or the election of an illustrious citizen to cardinal.

Possession and use of the Piazza was often the cause of conflict between religious and political powers, as shown by the vicissitudes linked to the cost of restoration work on the Ghirlandina belltower in the sixteenth and seventeenth centuries, or the numerous clashes between the sacredness of places of worship and the substance of the city’s economics, its stalls and shops coming close to invading the cathedral.

For the city, the twentieth century opened with restoration of the cathedral, which was thus isolated from both Palazzo Arcivescovile and the rectory:these were the first signs of a new tide turning in the old square.Year after year, the Piazza was then affected by the same facts brought by World War Two.

The gradual economic wellbeing that started in the fifties was most evident in the new use of the Piazza as a car park.Later, the newspapers, both local and national, reported the fact that the Palazzo di Giustizia was knocked down in 1963 to make way for the new headquarters of the Cassa di Risparmio bank, designed by Giò Ponti.

During the second half of the twentieth century, culture was in the limelight in Piazza Grande.From contemporary art installations in the seventies and the exhibitions on the ground floor of Palazzo Comunale, to the first editions of “Theatre in Piazza” and showings of photos by Giuseppe Panini and Beppe Zagaglia; from intercultural happenings in the nineties to the first editions of the International Festival of Military Bands and the Serate Estensi (Estense Evenings); from exhibitions by the Rossini Choir in the fifties to the first concerts in the seventies.Festivalfilosofia,with keynote lectures held every year in the square by major philosophers with debates, readings and a look at contemporary man and his world, according to the themes of the various editions.

Together with the cathedral and Girlandina belltower, Piazza Grande has been a UNESCO World Heritage Site since 1997.

On www.unesco.modena.it you can take a virtual visit around the Modena UNESCO Site, freely moving from the outside to the inside of the World Heritage monuments, taking a close-up look at the sculptures and works, all with dedicated information sheets provided.
Thanks to this tool, parts of the buildings not normally open for visits can be seen, such as the bell chamber and the steeple on the Ghirlandina.