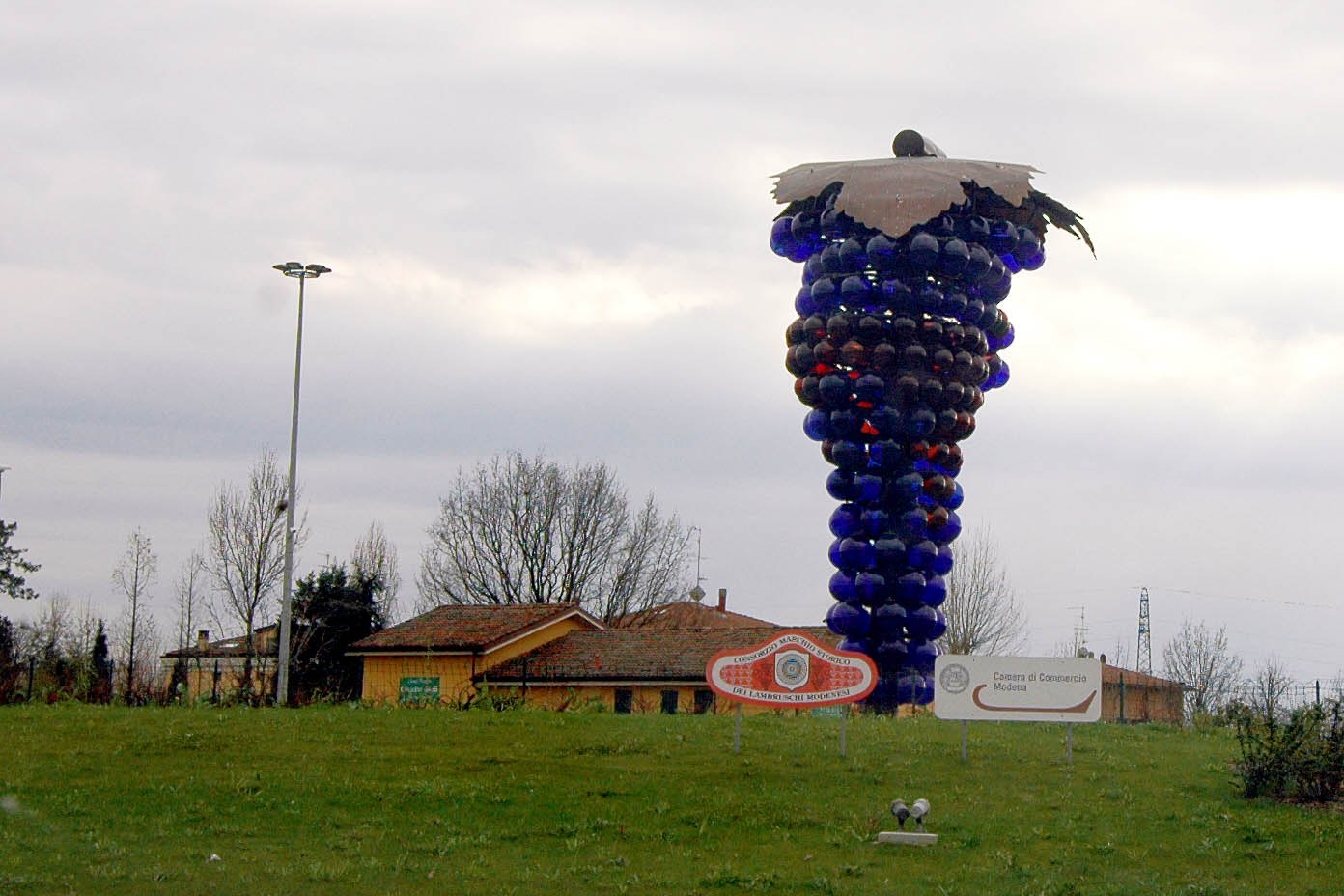 Did you know that Modena Province has the largest number of PDO (protected designation of origin) and PGI (protected geographical indication) products in all of Italy?

It’s amazing how many of our local dishes, wine, liqueurs and other food products have been recognized for their quality and authenticity: a distinction that is a genuine source of pride.

It’s no wonder, then, that the bond that unites Modena Province and its culinary specialties and traditions is so strong.

Because of that close relationship, celebrated so frequently over the years, we organized this tour around the Modena area’s “monuments to deliciousness.”

In fact, more than a few sculptures have been created specifically to pay homage to traditional local foods.

Ready to get started?

Driving from Modena toward Vignola, in the traffic roundabout at the intersection of Via Vignolese and Via Nuova Estense, you’ll come upon the “Grande Grappolo” or “big bunch of grapes.” This sculpture honoring the Lambrusco grape was commissioned by the Historic Brand Consortium of Lambrusco Wines.

The Porta del Lambrusco (the Lambrusco Gate), is the name given to the sculpture by the Modena-based artist, Erio Carnevali. The twelve-meter cluster of grapes was erected to honor Lambrusco, the sparkling red wine beloved all over the world. This “big bunch,” sculpted by master glassmakers to represent the colors of Lambrusco wine, includes 240 grapes of varying diameters, each of them in Murano blown glass. The leaves are in copper to recall the colors of the Fall.

Instead of going straight onto Via Vignolese from the roundabout, turn left onto Via Emilia, which leads straight to Castelfranco Emilia and the Tortellino Monument in Piazza Aldo Moro. According to legend, during the Middle Ages, the innkeeper of Osteria Corona peeked through a keyhole to spy on a beautiful guest (some say it was the Goddess Venus herself) as she undressed. He was so struck by the contours of her navel that he reproduced what he’d seen in the medium of pasta.

From Castelfranco Emilia, head toward Spilamberto. In the traffic roundabout at the entrance to the town, you won’t miss a sculpture representing a giant drop of Traditional Balsamic Vinegar of Modena.

Known as “Goccia: L’Essenza” (“the essential drop”), the monument was erected in 2011 by architects Nadia Ugolini and Alessandro Zomparelli in honor of Rolando Simonini, the founder of the Spilamberto Guild of Traditional Balsamic Vinegar Makers.

The last stop on the “monuments to deliciousness” tour stands in the middle of Castelnuovo Rangone: a charming bronze pig that is very close to the hearts of Castelnuovo’s residents. The Hog Statue is the work of Kee Sansen and was placed in the center of town to honor the animal that is a symbol of the area’s economy.

This imposing work is among the largest Murano glass sculptures ever made, and its significance is symbolic: It honors the dedicated men and women whose work goes into the making of Lambrusco.

A fifty-centimeter high bronze tortellino, created by sculptor Pavullo Giovanni Ferrari, is the centerpiece of a larger sculpture intended to represent the history of this traditional specialty.

The “Goccia: L’Essenza” monument is a celebration of the essence of balsamic vinegar in its most perfect, silky, and sinuous form. The monument symbolizes the entire world that has given birth to this amazing product, the fruit of nature and of human ingenuity.

A gift to the town from the Dutch Meat Association in recognition of the quality and commitment of the many Castelnuovo companies that make pork-based products, the statue has become one of the town’s best-known images.