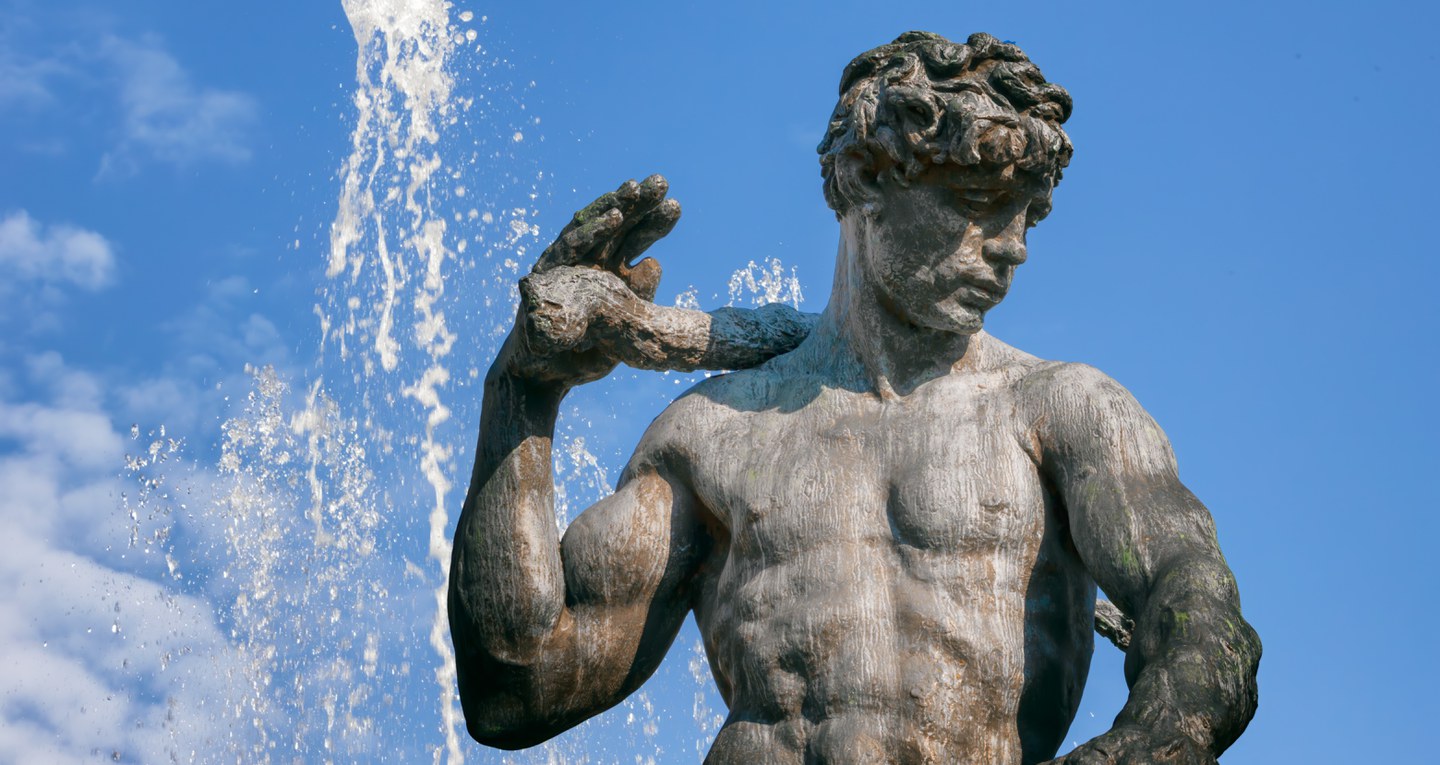 Sculpture enthusiasts will appreciate this tour of discovery among the works of Giuseppe Graziosi, the early 20th-century Italian painter, photographer, engraver, and sculptor whose works can be found at various points around Modena’s historical center.

Graziosi was a versatile artist who worked in several different mediums and experimented with new techniques. He was born in Modena Province at the end of the 1800s and gained national and international fame for his works.

As you walk through the streets of the historical center, you can’t miss the many bronze fountains that Graziosi designed. On this walking tour, you’ll learn about the artist’s life and accomplishments.

We recommend starting out at the monumental Due Fiumi (“Two Rivers”) Fountain on Largo Garibaldi. It was inaugurated in 1938 when the city's new aqueduct went into operation.
The Due Fiumi Fountain is considered Graziosi’s most prestigious work. Designed to beautify Modena’s eastern entrance, this sculpture displays a series of circular travertine basins and two bronze figures, one female and one male, which respectively symbolize the Secchia and the Panaro Rivers.
The male figure, who faces east toward the river, is an imposing young man who pours water from an earthen jar with one hand and, with the other, carries a tree branch across his shoulders. The female figure is a young woman, a symbol of fertility, who faces the city. She holds a sheaf of grain that spouts a jet of water.
Impressive and imposing, the fountain merits an evening visit as well, when it is expertly illuminated by spectacular beams of light.

Second stop: The Cherub and the Goose and the Maiden with a Basket of Fruit

Continue toward Piazza XX Settembre where, in one corner, you’ll find the Cherub and the Goose (Il Putto con l’Oca), a bronze copy of a Graziosi statue that depicts a child intent on stealing a fish from a goose that is trying to take it. Commissioned by the city in the early 1930s, the statue was intended to be positioned high above the center of the square. Currently, it is located in a corner on a “more modest” two-lobed basin. In the 1980s, the original statue was moved to the Giuseppe Graziosi Gipsoteca in the Palazzo dei Musei. At the end of this tour is a more in-depth description of the Palazzo.

Nearby, in the historic Albinelli Market, the Maiden with a Basket of Fruit (La Fanciulla con Canestro di Frutta) is on display. Built in 1931 as Graziosi's first local public contract, the bronze statue was built to provide water to clean fruit and vegetables purchased in the market. The maiden stands within a basin, a basket of fruit under her right arm and a sheaf of wheat in her left hand.

The Maiden with a Basket of Fruit remains a charming and important presence in the Albinelli Market, the temple of Modena’s culinary traditions.

While at the market, take time to immerse yourself in the colors and flavors of this symbolic location. The connection between past and present can be felt in the air here. Shop at one of the many stalls inside or enjoy a meal at one of the market’s small tables.

Third stop: The Fountain of the Nymph

After lunch, continue to the suggestive Piazzale di San Giacomo and the Fountain of the Nymph. In this statue of a beautiful maiden (the nymph of Greek and Roman mythology) pouring water from an amphora, Graziosi harmoniously blended references to 17th-century sculpture with the beauty of the figure he depicted.

Rest on the bench alongside to contemplate and enjoy the quiet harmonies of this picturesque square and the historic buildings and lovely outdoor restaurants that surround it.

A few steps away, in Piazza San Francesco, is the last of Graziosi’s works on this tour: the St. Francis Fountain (La Fontana di San Francesco) which depicts the saint in communion with the water and birds.
This sculpture, like several others, is one of a series of works by the artist that were commissioned by the City in the 1930s to decorate public fountains following the construction of an aqueduct.

Opened in 1984 following a donation by Graziosi’s children of a large collection of his works, the Gipsoteca is open to visitors by request only during the regular hours of the City Museums.

The galleries of the Gipsoteca house seventy preliminary models of Graziosi’s works in terracotta and plaster (both originals and copies) along with some 200 pages of drawings, etchings, aquatints, and lithographs.

Fountain of the two rivers of Modena

Fountain of the nymph