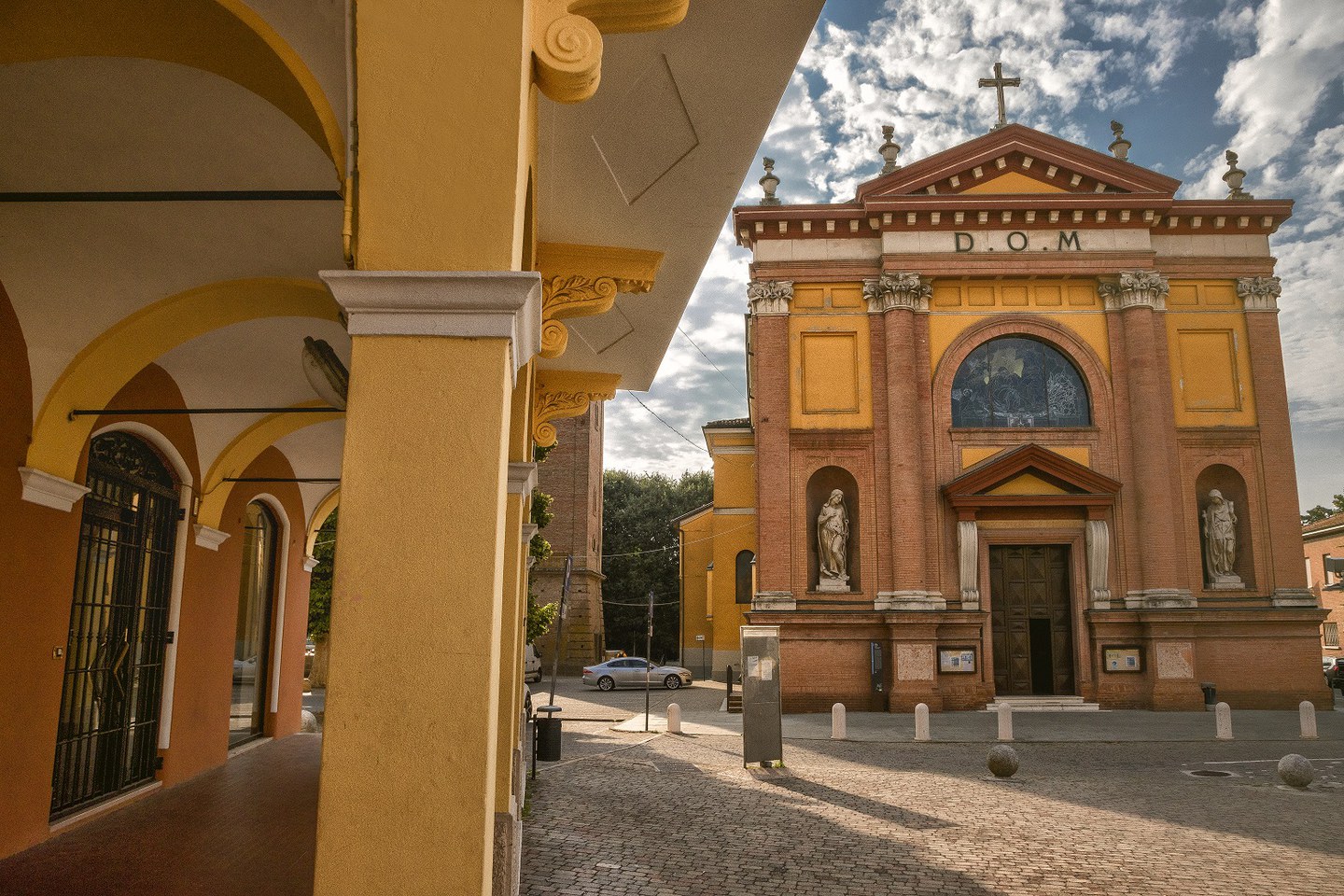 Castelnuovo Rangone offers opportunities to visit such interesting sites as the Terramara di Montale Park and the Museo della Salumeria, a museum dedicated to the art of charcuterie. No one will want to miss the chance to take a photo of the bronze statue of a hog that stands in front of the Church of St. Celestine (San Celestino).

Sites you won't to miss

The Parish Church of St. Celestine, Pope Celestine I

First mentioned as early as 1181, the church was designed by the architect Cesare Costa and built between 1856 and 1866. Costa was a primary exponent of architecture in the Modena and Reggio areas. Inside the church hang works by Adeodato Malatesta, the famous leader of the “Modena School”: depictions of St. Aloysius of Gonzaga (Luigi Gonzaga) and of St. Anthony the Great (Sant’Antonio Abate) as well as an 1873 painting of St. Celestine I, located on the high altar.

Castelnuovo Rangone’s famous Hog Statue, the work of Kee Sansen, was unveiled on December 14, 1997. Located between the Torrione civic tower and the Church of St. Celestine, the small bronze statue honors the symbol of the town’s economy.

MuSa: The Villani Museum of Salumeria

Don’t leave Castelnuovo without a visit to MuSa, the Villani Museo della Salumeria, Italy’s first museum dedicated to the history and production of charcuterie. MuSa is located in the historic headquarters of the Villani firm (est. 1886), the oldest producer of salami and other cured and processed meats in Emilia-Romagna.

Le Bacheche Poetiche: a Showcase of the Poetic Arts

Beginning in June 1998, twenty-two glass display cases were placed around Castelnuovo Rangone that contain nothing but words: poems, excerpts from novels, song lyrics, letters, prayers, and diary entries. These showcases of the poetic arts can be found in parks, on bike paths, and along the streets of the old town.

In Castelnuovo, be sure to sample products made throughout the entire Modena area.
The products associated with this area of Italy come largely from the processing of meat, including the making of zampone. Zampone, in which a mixture of ground pork flavored with herbs and spices is stuffed into the hollowed-out trotter (the lower leg of a pig), is a traditional Winter offering in the Modena area and beyond. Its “fame” is honored on the first Sunday of each December during the Superzampone Festival. Montale amaretto (an almond-flavored liqueur) is also well known, as is balsamic vinegar, nocino (a coveted walnut-based liqueur), and Parmigiano-Reggiano cheese.

Pork products are Castelnuovo’s main resource, and the town has even won a place in the Guinness Book of Records for its annual Superzampone Festival (first Sunday of December).

The Terramara Open-Air Archaeological Park and Museum is located in Montale, just a few kilometers northwest of Castelnuovo. Terramara is dedicated to the terramare cultures of the Po River Valley. The terramare developed around the middle of the second millennium BCE to become one of Europe’s most important Bronze Age civilizations.
A visit to the reconstruction of a terramare village, complete with a moat, a protective rampart, and two homes furnished with glassware and crockery, utensils, weapons, and clothing, is like diving into prehistory.

The Grave of Luciano Pavarotti

About ten minutes north of Castelnuovo, you can visit the house where Luciano Pavarotti lived during the final years of his life as well as a museum that honors the story of the great tenor.

The Jack Kerouac Bike Path, a section of the Modena-Vignola bikeway, passes through the communities of Castelnuovo Rangone, Spilamberto, and Castelvetro. The path was built over the route of a disused local railroad and officially opened in October 2000. Along the path, where crossing keepers’ lodges once stood, the town has erected plaques containing excerpts from Kerouac’s novels.

The Modena Golf and Country Club

The Modena Golf and Country Club is located a short distance from Castelnuovo and was developed by the German golf champion, Bernhard Langer, and the American architect, Jim Engh. Covering more than 250 acres, the golf course is known as one of the best facilities of its kind in Italy.

Archeological Park and openair Museum of Terramara in Montale
The Terramare were Bronze Age villages that sprang up in Emilia and in the central region of the Po valley around the middle of the second millennium B.C.
Contact details

WHERE WE ARE
41051, Castelnuovo Rangone, Modena