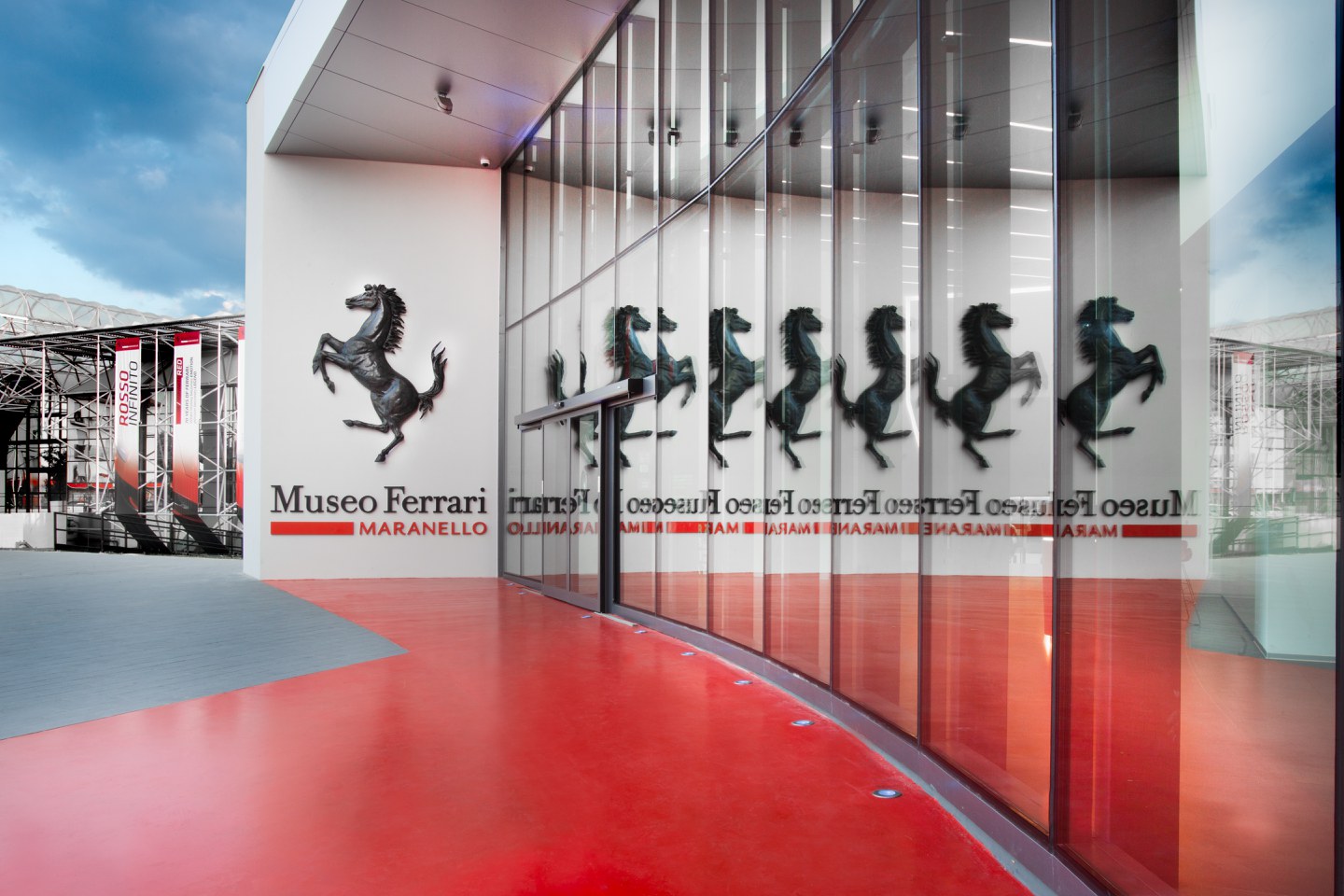 Archaeological excavations date its existence to as early as the Bronze Age (1800-1000 BCE), but numerous finds provide evidence that the area was inhabited in earlier eras as well. The town’s name probably derives from the settlement of the noble Marano family here around the year 1000. They built a castle, which still stands today. Located at the foot of the Tuscan-Emilian Apennines and crossed by the 18th-century Via Giardini, over the centuries Maranello became a holiday resort for Modena’s aristocracy and middle-classes who established homes here in stately villas. After the Second World War, Enzo Ferrari transferred the headquarters of his company outside Modena, and since then Maranello’s history has been doubly linked to the Ferrari firm and to its worldwide fame. In 1943, the company with the “Prancing Horse” logo established its headquarters in the “historic” factories on Via Giardini. From the industrial development of the 1950s and 1960s to the present day, Maranello and Ferrari have become permanently intertwined.

In the world of cutting-edge cars, Maranello is synonymous with high-performance and technological innovation. It is the home of “the red”: Ferrari. Each year, thousands of enthusiasts from all over the world gather here to share their love for cars and for Formula One racing.

If that describes you, a visit to the Ferrari Museum in Maranello, opened in 1990, is a once-in-a-lifetime must.

Sites you won't wont to miss

Maranello’s Ferrari Museum is a place of worship as well as an opportunity to celebrate a legend. The Museum tells the story of the Ferrari of today and tomorrow, and especially of the extraordinary history of the “Prancing Horse,” Ferrari’s nickname and logo. The most famous (and most victorious) Formula 1 racing cars are on display here, as are models in the Ferrari P and Gran Turismo series, and the best of Ferrari’s road cars. Try out a driving simulator or a pit stop and tire change: both experiences are unforgettable.

Visit to the Ferrari Factories and the Fiorano Test Circuit

A panoramic shuttle tour along Viale Enzo Ferrari provides both access to the factories and a visit to the Fiorano Testing Circuit. Of particular interest in the factories are structures built by such famous architects as Renzo Piano, Massimiliano Fuksas, Jean Nouvelle, Marco Visconti, and Luigi Sturchio. The futuristic Wind Tunnel (designed by Piano), where technicians test the aerodynamics of racing cars, is a special treat. Equally interesting are the well-preserved historical areas of the complex, starting with an entrance hall that has remained identical since 1947.

The Church of Maranello

Located in the heart of the town, the Church of Maranello opened for worship in 1899. Its bells are rung whenever a Ferrari brings home a victory!

The MABIQ was designed by the Japanese architect Arata Isozaki and by Andrea Maffei. Its supple shapes and surfaces are reflected in the bodies of water that surround it. In the context of the architectural excellence of the Ferrari factories, this structure is home to the Maranello Municipal Library and hosts meetings, exhibitions, and cultural programs.

Like other towns in Modena Province, Maranello is synonymous with fine Emilian cuisine. Here, you can sample the best known local delicacies such as PDO (protected designation of origin) Parmigiano-Reggiano cheese, zampone and cotechino (dishes made from a mixture of ground pork flavored with herbs and spices and stuffed into the hollowed-out lower-leg of a hog), prosciutto and other signature cured meats, fresh filled pastas, gnocco fritto (pastries something like a deep-fried dumpling), crescentine (a round, flat bread, flavored with spices and generally eaten with cold cuts, cheese, or spreads), Lambrusco wine, and PDO and PGI (protected geographical indication) balsamic vinegar. The area is also filled with farms, vinegar and cheese makers, and wine cellars where visitors can discover and directly experience the production of traditional local specialties.

The Gran premio del gusto is a day dedicated to local food and wine and is organized by the town and by the Maranello Terra del Mito Consortium.

Maranello’s “Red Night” celebrates the “Passion for Red,” organized by the Town of Maranello and the Maranello Terra del Mito Consortium in partnership with the Maranello Ferrari Museum and the Scuderia Ferrari Club. A rich program celebrating the Ferrari legend includes performances, music, activities and, of course, cars.

The Village of Torre Maina

Not far from Maranello, in the valley of Tiepido Stream, is the Village of Torre Maina, whose name refers to the tall 14th-century tower that was once part of a fortress (today, remnants of a wall in river stones remain). The summit is now covered by a gabled roof, but the remains of the corbels and traces of ancient battlements are still visible. The Church of Torre Maina, dedicated to Sts. Peter and Paul, stands isolated on a nearby hill. Dating to the 10th century, the Church appears today in its late 19th-century form, with a three-nave interior and, in the apse, a painting of Sts. Peter and Paul by the Modena-based artist, Luigi Manzini, active in the middle of the 19th century.

The Witch’s Tower, the remains of an ancient quadrangular tower, is located at the top of the Fogliano di Maranello hills. Built between the 13th and the 15th centuries CE, it serves as a reminder of the presence of a fortified structure once used as a lookout tower and refuge. Today it is an optimal location for star-gazing, and two circular platforms have been placed alongside it for optical instruments.

The Tiepido Stream Nature Trail is a bike path with a stabilized gravel base that follows the river. The Trail starts in San Damaso di Modena and ends in Colombaro (near Formigine) ten kilometers later. At the golf course, the trail joins another bikeway that goes from Maranello to Torre Maina.

Not far from Maranello stand several fascinating historical palazzos and castles, including Spezzano Castle, Formigine Castle, and the Ducal Palace of Sassuolo. A short drive away are the Salvarola Hot Springs and the chance for a relaxing break.

Other excursions can be found on the www.maranelloplus.it site.

Because the Ferrari Museums are here, tourists come to Maranello all year round. If you’d prefer to visit when the climate is mild, Spring and Fall are the best times.

MABIC (Maranello public Library)
MABIC is the seat of Maranello public library. It houses meetings, exhibitions and cultural activities all year round. The building is designed by Japanese architect Arata Isozaki and Andrea Maffei, and it is included into the architectural excellence context given by the presence of the Ferrari factory.
Galleria del vento - Wind Gallery
The Italian world famous architect Renzo Piano planned for Ferrari a work of high architectural and technological value, the Wind Gallery. It was inaugurated in the 1997.
Ferrari research centre
The general concept behind the project was to create an environment that would bring the employees closer to nature.
Ferrari Museum in Maranello
The Museum in Maranello features Ferrari’s present and future, its roots deep in the extraordinary history of the “Prancing Horse”. A visit that takes in the most famous, multi-winning Formula 1 cars, models from the Sport Prototype and Gran Turismo categories and the most important road versions. The Museum also offers a whole host of other attractions to make the visit extra exciting: a semi-pro Formula 1 simulators, a set allowing visitors to pose in a Ferrari and take home a photo souvenir of their visit, the chance to try out their skills in a real pit stop wheel change, a big Ferrari Store and welcoming cafeteria.
Contact details