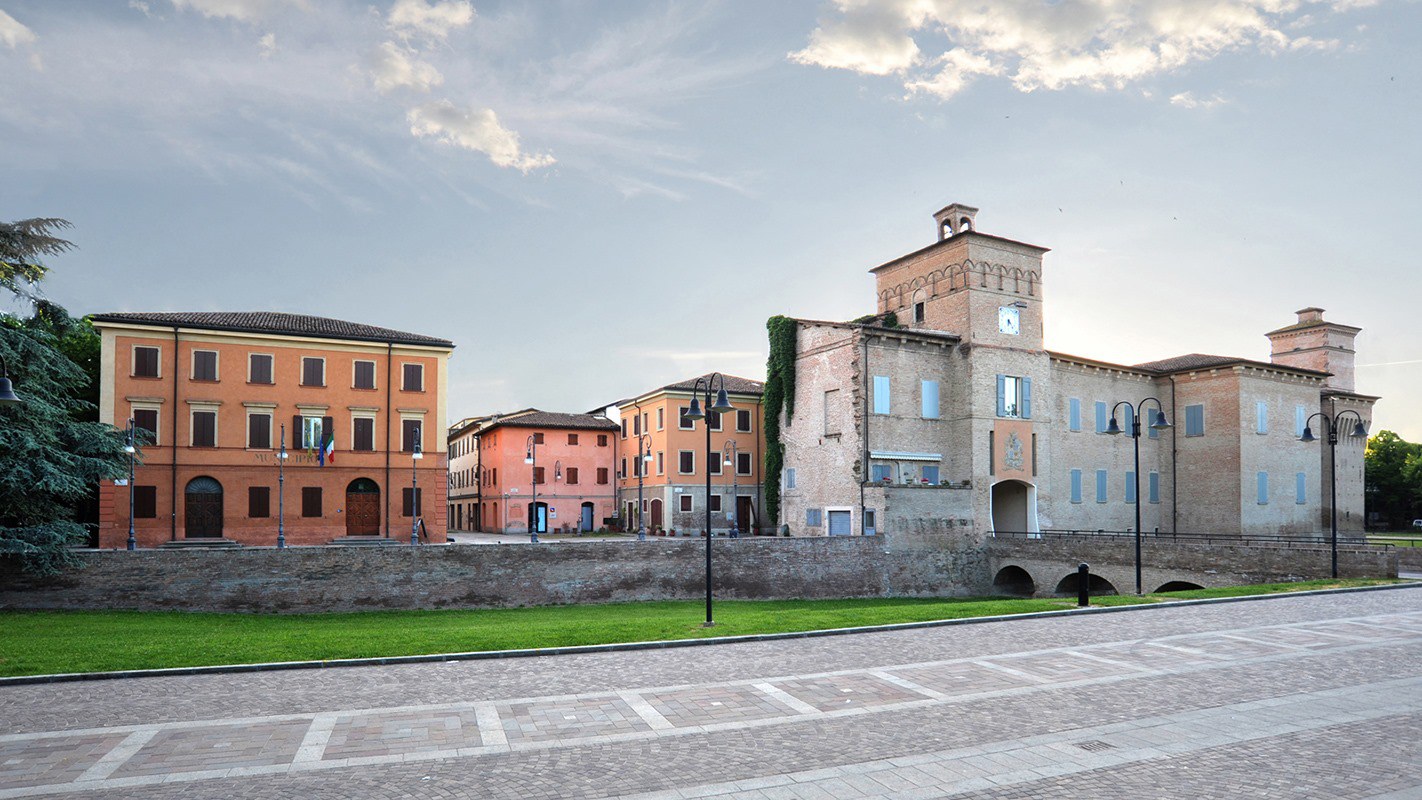 The town’s name suggests its rural, predominantly agricultural, origins. In fact, the name Soliera derives from the Latin word "solarium,” an open attic where grain was left to dry in the sun.

The Campori Castle, dating to the Middle Ages, is the symbol of the charming village of Soliera.

Beginning in the late Middle Ages, the Campori Castle became the subject of an enduring conflict between the House of Este, the rulers of the duchy of Modena and Ferrara, and the Pios, the lords of Carpi. A fortress was constructed within the castle walls during the mid-1400s. Today, Campori Castle hosts exhibitions of contemporary art and photography.

The Church of St. John the Baptist

Of particular interest are the exquisite paintings on display inside the church, including, in the second chapel on the right, a crucifixion scene by the noted 17th-century painter, Antonio Giarola of Verona, in which St. Philip Neri (Filippo Neri), St. Francis of Assisi, (Francesco d’Assisi), and St. Francis Xavier (Francesco Saverio), are depicted. The painting decorates a splendid altar frontispiece in faux marble from the 1600s, a typical example of the work of Carpi’s artisans.

The Church of St. Michael the Archangel (San Michele Arcangelo), known from at least 1106, was rebuilt in the 1400s, and was redecorated between the 1700s and 1800s. In the chapel on the left, an elaborate altar in imitation marble holds a fifteenth-century fresco of the “Madonna delle Grazie,” discovered by accident in 1828 during restoration work.

In addition to products local to the Modena area, including Modena’s PDO (protected designation of origin) traditional balsamic vinegar, Modena’s PGI (protected geographical indication) balsamic vinegar, and PDO Parmigiano-Reggiano cheese, visitors will find varieties of sparkling red lambrusco wine, zampone and cotechino (dishes made from a mixture of ground pork flavored with herbs and spices and stuffed into the hollowed-out trotter or lower-leg of a hog), cured meats and such traditional favorites as fresh egg pasta. The culinary symbol of the city is the “tortellone balsamico,” a filled, star-shaped pasta flavored with balsamic vinegar. The dish is made almost exclusively during the nearly 170-year-old fair that takes place each year around June 24th, the date of the Feast of St. John the Baptist, the town’s patron saint.

Always the most significant event on the Soliera calendar, the San Giovanni Fair is a happy meeting ground for history, local culinary traditions, and area producers and creators.

The Profumo del Mosto Cotto Festival takes place on the second or third weekend of October, culminating in a food fair on Sunday. Stands offer local food, wine, and other delicacies, and there are displays of nearly-forgotten crafts and trades and of vintage autos. Beginning early in the morning, volunteers begin cooking grape must, the unfermented juice pressed from whole grapes, destined for the production of Modena’s “black gold”: traditional balsamic vinegar.

Arti Vive Festival - end of June through the beginning of July

This multi-media festival, a kind of open-air theater, showcases the creativity of young people in all its manifestations: independent music, experimental theater, short-subject films, photography contests, and street art.

The Festival is dedicated to short-form works of fiction as thousands of readers come face-to-face with writers in the towns that make up the Unione Terre d’Argine area.

Don’t miss a visit to the Church of St. Bartholomew (San Bartolomeo) in Sozzigalli.