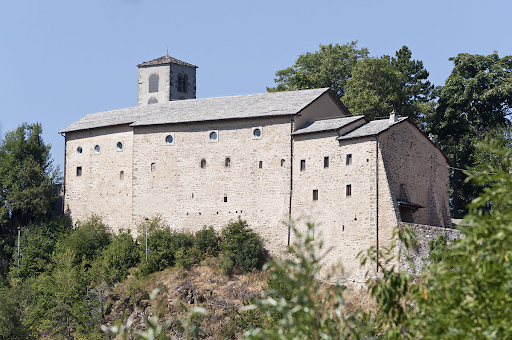 This would appear to be demonstrated by the presence of two siliceous arrowheads of the Copper Age found in the area. The first document to mention "Castrum Pelago" dates back to the year 753. All the men of Pelago took part in the building of the Rocca, thus being given the right to take shelter there in the event of danger. Roccapelago probably belonged to the Gualandelli family after the 12th century, then becoming a feud of the Montegarullo until 1240, and bearing the brunt of the belligerent politics practised especially by Obizzo da Montegarullo. In 1393, after Obizzo had rebelled against theEstense power, Roccapelago was subjected to the siege of the Lucchesi, allies of the Estense family, who took possession of the castle. In 1396 Obizzo regained possession of Roccapelago which remained under Montegarullo control until 1408 when a powerful military contingent, headed by Uguccione dei Contrari, captured Obizzo, who was taken to Ferrara as a prisoner. In 1586 in the now abandoned castle, was built the new church of Roccapelago. The square and massive shape without arcs, without columns and vaults let’s us believethat it was the room of the manor of Obizzo. (credit http://www.emiliaromagna.beniculturali.it)

In 2011, the surprising discovery in the crypt of the church of over 300 bodies buried from the 1500s to the 1700s, of which almost a hundred mummified. Mummies and grave goods are exhibited in the museum of the fortress "On the footsteps of Obizzo da Montegarullo".

WHERE WE ARE
Salita della Chiesa, 5, Roccapelago, MO, Italia