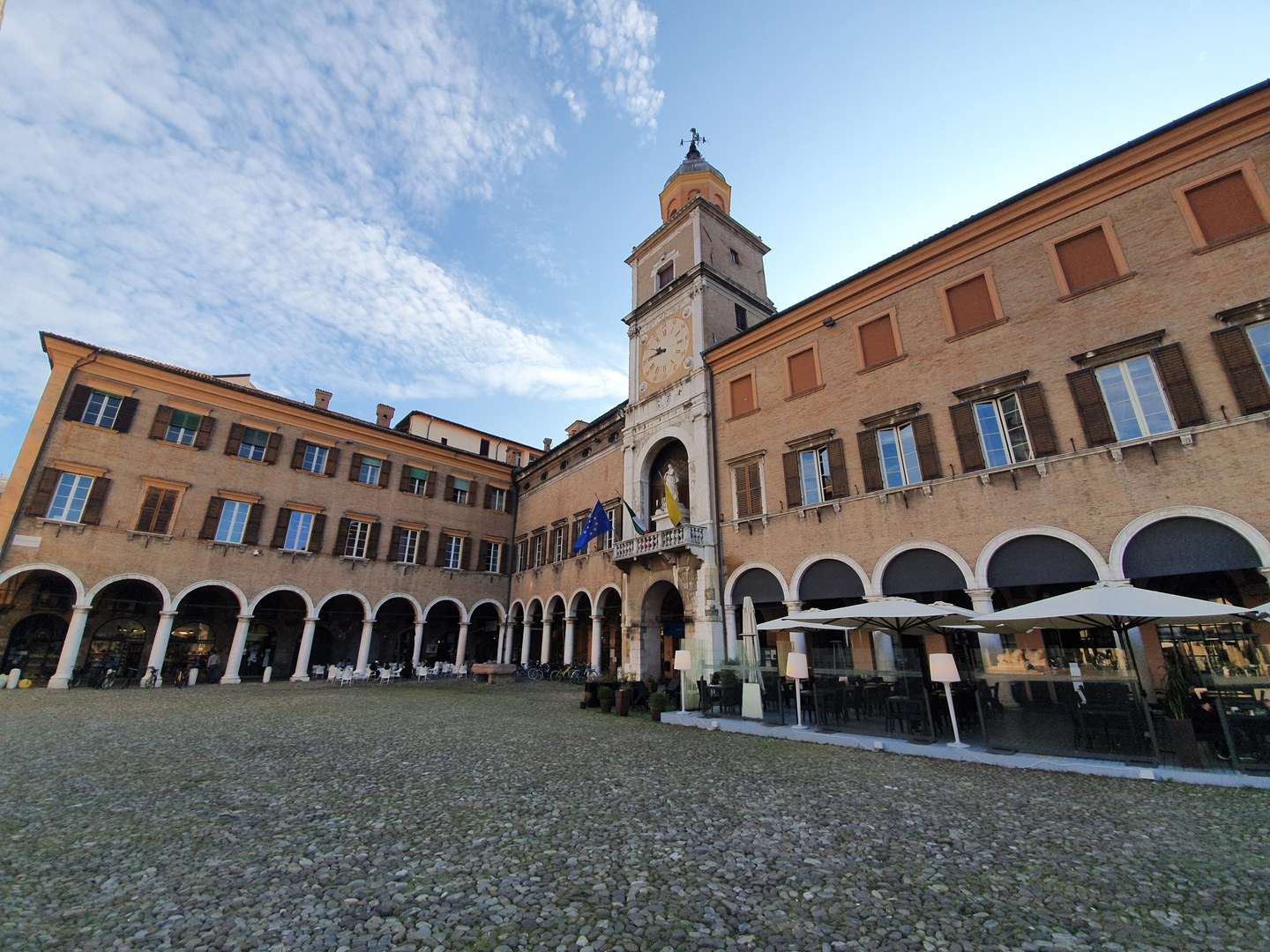 The unifying element of the main façade is the long portico with marble columns that regularly articulate the outer part of the building. Erected in seventeenth century style and in keeping with the original module adopted by Raffaele Rinaldi, known as “il Menia”, it was built in several stages and completed in 1825 adding three arches to the pre-existing five on the right side.

The historic rooms inside are open to visitors.
The Camerino dei Confirmati, decorated in 1770 by Giuseppe Carbonari and Girolamo Vannulli, is home to one of the city’s symbols: the Secchia rapita (Stolen Bucket), a normal wooden bucket, reminding the people of Modena of their glorious victory against the Bolognese in 1325 in the battle of Zappolino. The event is narrated in the mock-heroic poem "La secchia rapita" by Alessandro Tassoni.

A door on the right side of the Camerino leads into the Sala del Fuoco (Fire Room), so called because of its fine, large fireplace, a sixteenth century work by Gaspare da Secchia, where embers were stoked to heat the merchants who used to sell their wares in the square in winter. The room is adorned with beautiful paintings, the work of Nicolò dell'Abate (1512 ca. -1571), executed in 1546 at the behest of the Conservatori. Depicted from the left, for those who turn their backs to the fire, are the following episodes from Roman history and the Second Triumvirate: during the siege of Modena in 44 B.C. Brutus had cattle butchered in the square to provide food for those under siege; the battle between the armies of Antony and Octavian. On the opposite wall: the meeting of the Triumvirates Mark Antony, Lepidus and Octavian on an island on the river Lavino; on the right, Decimus Brutus and Octavian on the two opposite banks of the river Lavino in Modena. Depicted above the fireplace is Hercules ripping open the mouth of the Nemean lion. The fine wooden coffered ceiling was executed by Giacomo Cavazza and painted by Ludovico Brancolini and Alberto Fontana. In the central square is the municipal coat-of-arms, while a frieze alternating triglyphs and metopes decorated with motifs inspired by Roman antiquity runs around the walls just beneath the ceiling.

Also worth a visit is the seventeenth century Sala del Vecchio Consiglio (Room of the Old Council)whose ceiling was decorated by Bartolomeo Schedoni and by Ercole dell'Abate at the beginning of the seventeenth century with subjects promoting good government and love for the home city. At the centre of the vault, a figure holds up the world and sits astride an eagle with augers between its talons, the allegory of the City and the Dukedom. The scenes in chiaroscuro representing miraculous episodes from the life of the patron saint Geminiano were painted by Francesco Vellani (1689 - 1768) during the course of decorative work started in 1766. The painting depicting the saint kneeling and pointing out the city of Modena to the Madonna of the Rosary is the work of Ludovico Lana (1597 - 1646) created as a processional banner at the end of the terrible plague of 1630. Another two canvases are in the same room: Saint Francis and the Angel by Ercole dell'Abate and Saint John the Baptist and an Angel by Bartolomeo Schedoni. Sixteenth century are also the high-backed chairs of the Conservatori, in carved wool with vertical pilaster strips and mirrors crowned by a trabeation with metopes and triglyphs. They were created for the nearby Fire Room in the mid sixteenth century and moved here in the seventeenth century.

The Sala del Vecchio Consiglio is connected to the Sala degli Arazzi (Tapestry Room)The walls are decorated by eighteenth century paintings on canvas that imitate tapestries, the work of Girolamo Vannulli, while the cornices with volutes and branches with flowers were executed by Francesco Vaccari. The paintings very cleverly imitate the tapestries in vogue in France in the 18th century and depict episodes from the Peace of Constance (1183) which put an end to the dispute between the towns of northern Italy and Federico Barbarossa. In the vault is a large medallion containing the figure of breastfeeding Charity inside a square of foreshortened imitation stuccowork by Francesco Vaccari, while between the windows is the Allegory of Abundance. On the floor, in wood, is the motto of Modena.
From the Sala degli Arazzi, a door leads to the vast Sala dei matrimoni (Wedding Room): the vault was painted by Francesco Vaccari in 1767 using an architectural motif with wide monochrome volutes around central oval which depicts the Modena coat of arms held by two putti. The walls display some paintings by Adeodato Malatesta (1806 - 1891), the most important Modenese painter of the nineteenth century.

Returning to the Piazza, near the Palazzo Comunale, a curious monument is to be found: a large squared-off block of marble, probably of Roman workmanship, placed here during the construction of the Cathedral. Its name, preda ringadora, dialect for haranguing stone, comes from the fact that here, in the past, it was possible to freely harangue the public, as if from a stage. But it was also the place of public executions and punishments: in fact, in order to avoid prison, on market days insolvent debtors had to run around the piazzas three times with their head shaved, and on every round, jump up and sit down on the stone – which was covered in turpentine – without their trousers on.

On via Scudari, in the back of the palace, you can admire the Perseo statue. The work in marble, by the sculptor Cesare Aureli in neoclassical style, stands in the courtyard of the Town Hall since 1952, the year in which the Mayor Alfeo Corassori, wanting to embellish the loggia of Townhall, got by Marquis Egidio Campori permission to take from the his palace the statue of Perseus, miraculously rescued from the bombings of June 1944.

From Monday to Friday from 9.00 am to 6.00 pm, reservation is mandatory and the entrance is free.

On Saturday from 1.00 pm to 3.00 pm, reservation is mandatory and the entrance is free.

Admission to the Historic Rooms of the Palazzo Comunale: Sundays and public holidays € 2.00.
No charge for children up to the age of 5, the disabled and carers, guides and interpreters, teachers accompanying school classes of any age.

All-inclusive Ticket (NOT AVAILABLE AT THE MOMENT) a single € 6.00 ticket gives entry, during the times shown on the ticket, to: Ghirlandina bell tower, the historic rooms in Palazzo Comunale, Municipal Vinegar Factory, Cathedral Museums. No charge for children up to the age of 5, the disabled and carers, guides and interpreters, teachers accompanying school classes of any age.

The All-inclusive ticket has no expiry, so it can be used on different days. With each visit, the relative part of the ticket will be annulled. On sale at: IAT tourist and info offices in Piazza Grande, Ghirlandina bell tower, Cathedral Museums, historic rooms in Palazzo Comunale (only on Sunday afternoons).

Wheelchair accessible: the lift is located left of the glass door entrance in Piazza Grande. If you find any trouble call us at +39 (0)592032660. 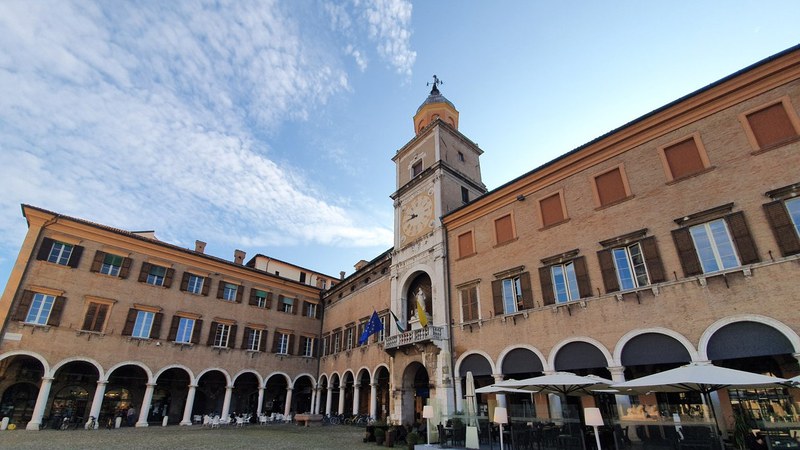 WHERE WE ARE
Piazza Grande, 16 - first floor, 41121, Modena, Modena
Select the date and time of your visit and book the free of charge ticket