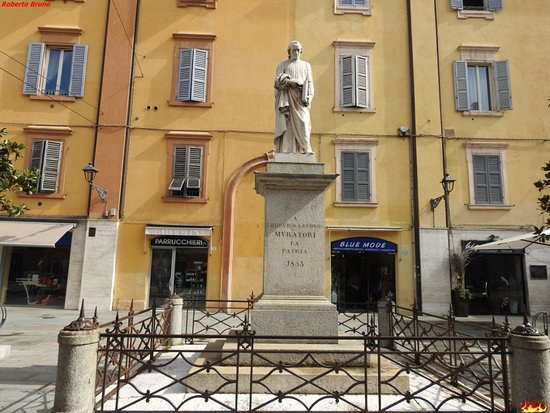 His education was largely complete at the end of his stay in Milan at the Ambrosian Library, where he was welcomed as Doctor by Count Carlo Borromeo.
The Duke of Modena Rinaldo I d'Este in turn invited him to a position as Archivist and librarian. When Modena was occupied by the French between 1702 and 1707, the entire archive had recently been reorganised; since it had to be transferred, Muratori supervised the task and, at the same time, realised his dream of updating and renewing Italian literary culture and tradition.
1708 marked for Muratori, on the occasion of the cession of Modena to France after the Austrian regency, a return to historical studies.
From 1710, his loyal friendship with Father Paolo Segneri and constant efforts at his side in charity work and education of the clergy instilled in him the desire to receive a parish where he could minister. This wish was met in 1716 when he received the provostship of Santa Maria della Pomposa in Modena.
He restored the church entrusted to him, which is still known today as Santa Maria della Pomposa.

In 1931, the interior of the Church saw the installation of the monumental tomb dedicated to Muratori.
The rectory adjacent to the Church on the north side was home to historian Ludovico Antonio Muratori from 1716 to 1750. This building is now home to the Muratorian Museum and the Deputation of National History for the ancient Provinces of Modena.

The Muratorian Museum was opened in 1931 on the occasion of the installation and consecration of the Tomb; the Aedes set up to collect the few relics and Works of Muratori was subsequently enhanced with many of his personal possession.