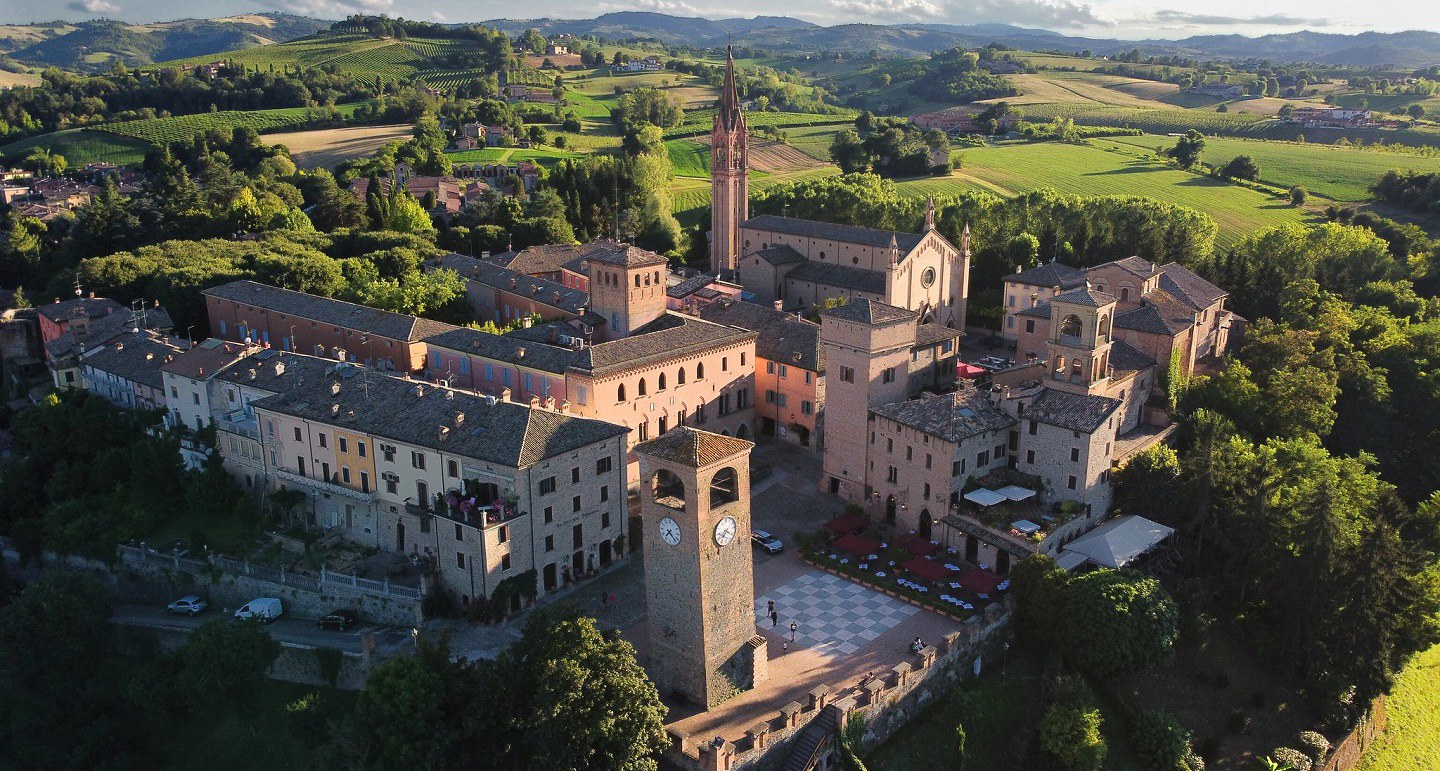 Artifacts recovered around the middle of the 19th century date the town’s ancient origins to the Etruscan period (those finds are now housed in Modena’s Archaeological Museum).

The Etruscans were followed by the Gauls and, subsequently, by the Romans who spread their villas, farms, forges, and necropolises throughout the area they called “Castrum Vetus.”

Scholars believe that, beginning in the 8th century, Castelvetro was already a castle, which, by the following century, had become a large and important court.

Castelvetro’s medieval appearance is enhanced by its towers, which include the Tower dell’Orologio and the Tower delle Prigioni (the “clock” and “prison” towers, respectively). The towers face Piazza Roma, also known as Piazza della Dama (“Checkerboard Piazza”) for its alternating white and black paving stones. Beginning in 1330, Castelvetro was a fiefdom of the powerful Rangoni family, who increased the town’s prestige, and was occupied by the French in 1796. The Este Dynasty assumed control in 1815, and the Lords of Modena and Reggio maintained their hold on Castelvetro until independence and annexation to the Kingdom of Italy.

Castelvetro di Modena is a center of winemaking and is synonymous with the Lambrusco Grasparossa varietal, which is grown here along with the Trebbiano grapes used in the production of balsamic vinegar. This strong tie to a winemaking tradition makes Castelvetro an ideal place to spend pleasant days discovering local food and wine.

Castelvetro has been awarded the Italian Touring Club’s “Orange Flag” as one of the most beautiful small towns in Italy, and it is a magical place where visitors can lose themselves in history and tradition. Programs of many kinds are organized during the year and offer a variety of ways to enjoy your time.

Surrounded in its ancient past by a city wall, this splendid and compact village offers unique treasures. Before anything else, we recommend a stroll through its narrow streets to admire the beauty. Once you arrive at Piazza della Dama (Piazza Roma), you’ll be surprised to find a charming piazza that offers a breathtaking view of the surrounding hills and is bordered by such notable buildings as the Palazzo Comunale del Secondogenito and Palazzo Rinaldi. The small church dedicated to Sts. Senesio and Teopompo is also in the old town, and Palazzo Rangoni is located across from it. The Palazzo features a large entrance with a decorated atrium, an internal courtyard, a grand staircase, and a gallery that connects the two wings of the palace where, in 1564, the famed 16th-century Italian poet Torquato Tasso was a guest.

Fili d’Oro a Palazzo is the permanent exhibition of the 16th-century style clothing worn in Castelvetro during the Renaissance era and recreates the ambience that surrounded the young poet, Torquato Tasso, during his stay at the Rangoni court.

The Municipal Vinegar Cellar (Via B. Cavedoni)

Two “batteries” of seven barrels each, all of them of different dimensions as the tradition of balsamic vinegar-making demands, are housed in the Municipal Vinegar Cellar. The wood used for the barrels is oak, chestnut, ash, acacia, and cherry. As soon as you walk through the entrance, the aroma of fermenting and maturing vinegar will greet you.

In the rich tradition of local food and other products, Castelvetro offers opportunities to taste the Province of Modena’s best-known specialties: PDO (protected designation of origin) and PGI (protected geographical indication) balsamic vinegar, PDO Parmigiano-Reggiano cheese, zampone and cotechino (dishes made from a mixture of ground pork flavored with herbs and spices and stuffed into the hollowed-out lower-leg of a hog), and fresh filled pastas (tortellini in broth or the larger “tortelloni”), as well as gnocco fritto (pastries something like a deep-fried dumpling), crescentine (a round, flat bread, flavored with spices and generally eaten with cold cuts, cheese, or spreads), borlengo (a thin flatbread), and calzagatti (pan-fried polenta), accompanied naturally by a fine glass of Lambrusco Grasparossa.

A local specialty, Lambrusco Grasparossa di Castelvetro di Modena has developed a rich and complex story during its thousand-year history. The local climate, soil, wild herbs, water, the exposure of fields to the sun, the wind, the slope of the vineyards, and annual rainfall all confer special characteristics to Lambrusco grapes and to the fine wine that comes from them.

From spring to autumn, tours to experience the charm of an ancient village surrounded by the beautiful hills of Lambrusco Grasparossa. Guided tours, exhibitions, tastings of food, wine and local products, nature walks to discover an authentic landscape among flowered fields, aromatic essences and vineyards.

The taste of truly good food, among the hills of Lambrusco Grasparossa, through the picturesque cycling routes of Castelvetro: an easy bike circuit suitable for both adults and children requiring no particular expertise, with tasting stops at wineries and farms.

Right in the centre of the ancient Castelvetro you will be able to see shows, performances and exhibitions devoted to everything that is “bizarre”. Buy unusual and strange objects from accurately selected stands.

Calici di Stelle – Quality wine tastings… under a sky full of stars – August
This appointment gathers food and wine excellence in a night devoted to tasting and stargazing. Local wineries will present the top of their products and restaurants will offer gourmet delicacies. This event is promoted by the National Wine Cities Association and Italian Wine Tourism Movement.

Dama Vivente – Living Draughts Game – September (even years)
The “Dama Vivente” (living draughts game) is an amazing draughts game played in the square with living characters in Renaissance-style costumes. During this biennial event, the audience can admire the historical parade, shows with soldiers, archers, acrobats, funambulists, waders and musicians, parading through the streets of the village.

Festa a Castello – A historical re-enactment of a renaissance banquet – September (odd years)
This historical commemoration remembers the celebration dedicated to the poet Torquato Tasso who holed up in Castelvetro in 1564 at the court of Rangone marquis, lord of these lands. The event consists in a rich Renaissance banquet, which can be joined only by wearing Renaissance-style costume. Musicians, fire-eaters, gypsies and dances from the past entertain the guests during feast.

Grape and Lambrusco Grasparossa di Castelvetro Wine Festival – September
This event aims to enhance and strengthen the agricultural vocation of the Castelvetro’s territory enriching the history and characteristics of its main product: Lambrusco Grasparossa di Castelvetro, which is also the main topic of the event through the alleys and squares of the ancient village. You will find itineraries to discover the places that create it, guided tasting sessions and a wide choice of stands offering traditional delicacies. Finally, a parade of carts dedicated to Bacchus will close the festival.

Poetry Festival – last weekend of September
A four-days festival dedicated to poetry in Castelvetro as well as other villages between Modena and Vignola. Shows and meetings with international guests among which poets, actors, musicians and other artists that will captivate the audience with the charm of poetry.

Viva Natale – Christmas Time in Castelvetro – December
During the weekends before Christmas, the medieval centre and the shops of Castelvetro will be animated by an evocative Christmas atmosphere with lights and the Nativity scene. You will find also entertainment for both adults and children.

The Levizzano Rangone Castle, in the tiny village of Levizzano Rangone, is surrounded by a wall, in the center of which the Matildica Tower stands. The “Bishops’ Rooms” (Stanze dei Vescovi), with their wood ceilings and Renaissance frescoes, are from the 16th century, and the open gallery on the second floor provides magnificent views of the nearby hills covered in grape vines.

The Rosso Graspa Museum of Wine and Rural Life is dedicated to local history and culture and to the area’s most special product: Lambrusco Grasparossa wine. Extraordinary photographs, drawings, and farm equipment help the past come alive as visitors follow the steps of the wine-making cycle (the “Grape Road,” the “Soil Road,” the “Wood Road,” etc.). Special Learning Areas provide more in-depth information, and exciting sound tapestries bring back the voices and sounds of the past.

The architecture of this oratory, a Romanesque-style gem that dates to the second half of the 12th century, is austere and simple with remains of the original ornamentation on the façade and main door. The interior is quite bare: six frescoed figures representing the saints are the only décor.

The Puianello Sanctuary was built in 1716 by the Marchioness Teresa Rangoni and dedicated to Our Lady of Good Health (Madonna della Salute). The Baroque-style church, constructed on a Latin-cross floor plan, houses such invaluable works of art as a painting of Our Lady of Health attributed to the 16th-17th-century Italian Baroque painter, Giacomo Cavedoni.

In the small underlying suburb of the castle of Levizzano, there’s an ex Napoleonic Cemeteryworthy of mention. In compliance with the introduction of the Napoleonic “Edict of Saint-Cloud” law in Italy in the early 19th century, the burial ground was built just outside the town walls, in the field of San Rocco at the foot of the Castle. It is one of the few remaining examples of its kind in Italy today.

As is true for the entire Province, the mild temperatures of Spring and Fall make those seasons the most pleasant time to visit. Given Castelvetro’s considerable charm, however, as well as its many events and activities, it is lovely to visit at almost any time of year.

The AudioPen will allow visitors to discover the history and curiosities of places of historical and cultural interest, from the ancient walls of the Castle to the more recent Piazza della Dama. Simply point the AudioPen at the icon indicating the point of your choice on the map, to activate the audio commentary associated with it. Each visitor can personalize their own guided tour in total autonomy, starting from the point they prefer.

Madonna della salute Sanctuary in Castelvetro
The Sanctuary of Puianello was built in 1716 upon request of Marquise Teresa Rangoni and it was dedicated to Our Lady of Heath. The building features a Baroque style with a Latin cross layout and hosts valuable pieces of art, including a painting thought to be a work of painter Giacomo Cavedoni.
Levizzano castle
The Castle of Levizzano is located in a dominant position on the wonderful hills of the homonymous village in the municipality of Castelvetro. Its structure consists of a city wall in the centre of which there is the so-called Torre Matildica - Matildic Tower.
Exhibition of Renaissance dresses
The permanent exhibition of Renaissance dresses is housed in Palazzo Rangoni and is dedicated to poet Torquato Tasso who was guest of marquis Rangoni.
Contact details

WHERE WE ARE
Via Torquato Tasso, 16, Castelvetro di Modena, MO, Italia