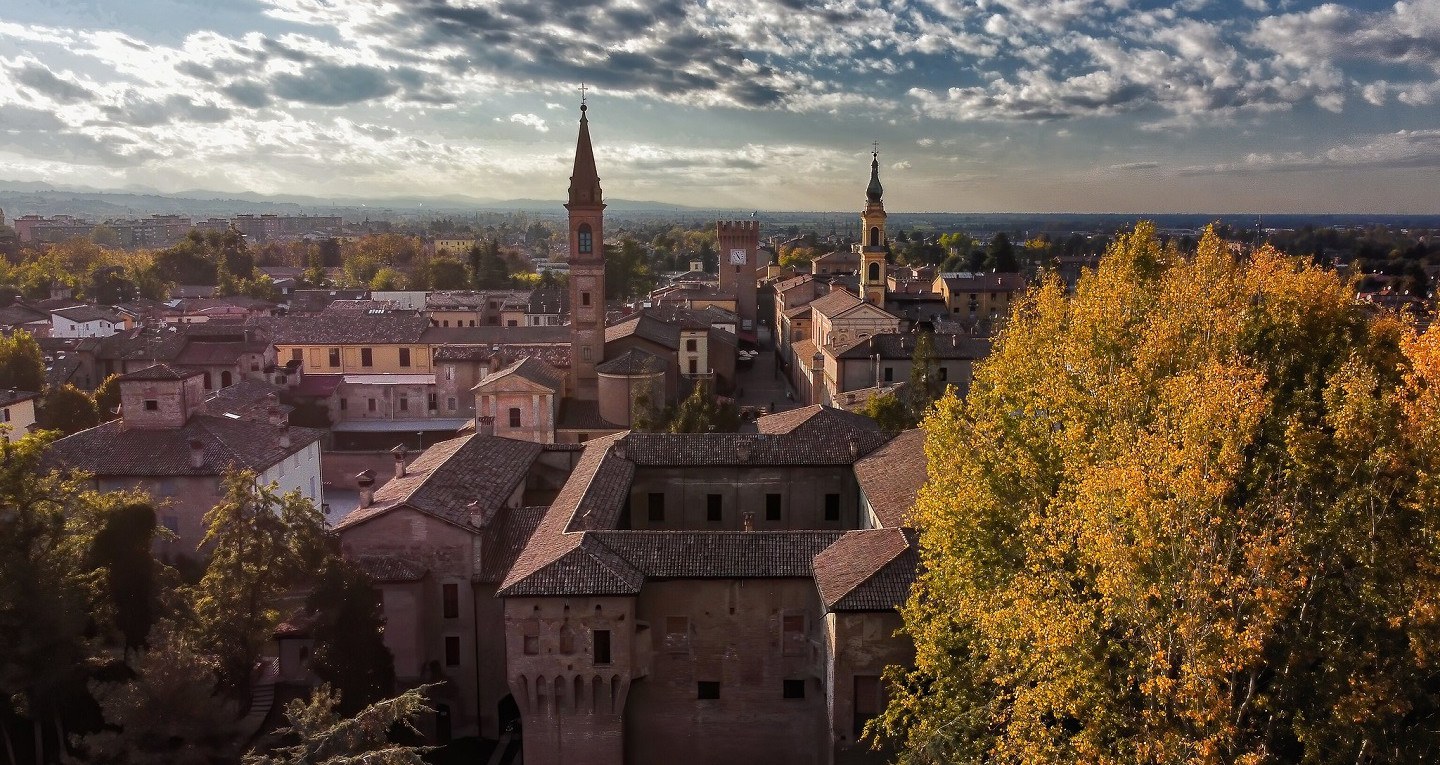 The first recorded news of Spilamberto dates to 776, when a hospice for pilgrims, owned by the Abbey of Nonantola, is known to have existed in the area. Spilamberto, in fact, grew up near the Via Romea, one of the ancient roads that ran through Europe on the way to Rome.

To add to its attractions, Spilamberto is the home of the consortium of traditional balsamic vinegar producers, which, along with nocino and amaretto liqueurs, is one of the town’s most important products. A museum dedicated to the history and production of balsamic vinegar is also found here.

The Torrione di Spilamberto or Spilamberto Tower is the name given to a complex of medieval-era buildings located at the entrance to the town beneath the 14th-century city wall, built by the City of Modena to strengthen the castle’s defenses. Today, the Torrione is home to the Antiquarium, Spilamberto’s archaeological museum; the headquarters of the association of nocino producers; and the “Cella di Messer Filippo,” a secret prison cell discovered in the tower in 1947.

Property of the Rangoni marquisate for more than 650 years, the Rocca Rangoni was acquired by the town of Spilamberto in 2005. Restoration work has been ongoing since 2011. The interior Cortile d’Onore is the site of the “Corte del Gusto,” a display where sellers showcase the finest examples of local food and wine.

The large and elegant Villa Fabriani, named for its first owners, the Fabrianis, an old and distinguished middle-class Spilamberto family, is decorated internally with frescoes that date to the early 20th century. Today, the Villa is the headquarters of the association of traditional balsamic vinegar producers and a museum created to take visitors on a voyage through the secrets and history of this local delicacy.

The “Goccia” (droplet) sculpture was the brainchild of artists Nadia Ugolini and Alessandro Zomparelli and honors traditional Modena balsamic vinegar. The sculpture, dedicated to Rolando Simonini, the founder of the association of traditional balsamic vinegar producers, is located on a traffic roundabout between SP 16 and SP 623 in Spilamberto.

In addition to traditional balsamic vinegar and nocino liqueur, other products local to Modena Province can be found here, including PDO (protected designation of origin) Parmigiano-Reggiano cheese, varieties of sparkling red lambrusco wine, zampone and cotechino (dishes made from a mixture of ground pork flavored with herbs and spices and stuffed into the hollowed-out trotter or lower-leg of a hog), cured meats, and such traditional favorites as fresh egg pasta.

The fair takes place each year around June 24th, the Feast of St. John the Baptist, the town’s patron saint, and welcomes thousands of visitors interested in the displays of local agricultural products. Each year, during the San Giovanni Fair, members of the Consortium of Producers of Traditional Balsamic Vinegar hold their annual meeting and award the coveted Palio di San Giovanni prize to the best family-produced vinegar.

The MAST COT Festival is held on the first weekend of October in Spilamberto’s charming old town. The moment when traditional balsamic vinegar first begins to come to life—the boiling of the must, the freshly crushed juice of grapes, in giant outdoor pots—is the centerpiece of the celebration.

Attractions not far from Spilamberto include castles and medieval villages located between the river valley and the Apennines: Vignola, Castelvetro, Marano sul Panaro, Guiglia, Savignano sul Panaro, Castelnuovo and Zocca, among others.

Antiquarium (Archaeological museum)
The intensive erosion that has affected the river Panaro in recent decades has brought to light major testimonies of numerous prehistoric sites and traces of historical times in the municipal areas of Spilamberto and San Cesario.
Sanctuary of the Blessed Virgin of Carmine in Spilamberto
The façade of this now restored church-oratory has a single door. Inside, over the main altar, there is a rich baroque frame holding the sacred image painted by Giusti.
Municipal Historical Archive of Spilamberto
Kept in the basement rooms of the town hall in Piazza Caduti della Libertà, 3 has been recently reorganized and inventoried, it preserves documents from 1475 to 1960.
Messer Filippo Ghost
This small prison, located in the Torrione in Spilamberto, tells the story of Messer Filippo
Contact details