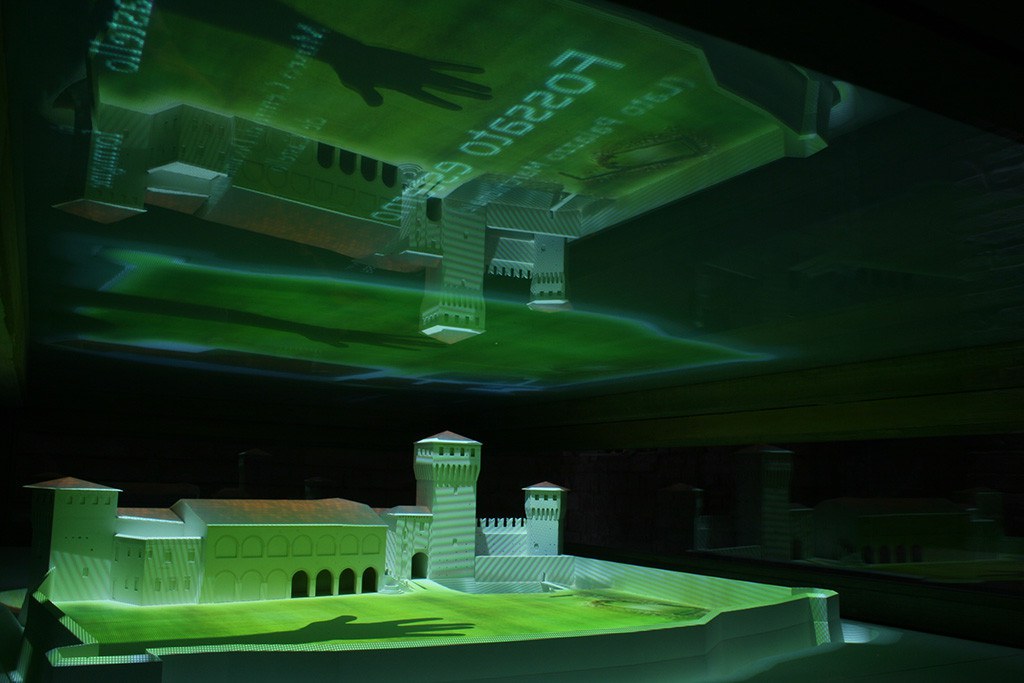 Museum and Documentation Centre
After the renovation completed in September 2007, the Museum and Documentation Centre, in the Rocchetta, and the archaeological park were opened to the public.
The idea of the museum is strongly linked to its location, the stronghold, the fortified building, inaccessible to the public before restoration. It is also closely linked to the archaeological park of the castle, with which it forms a single unit.
The museum is developed in episodes, suggested by the actual place where they are set, along two main coordinates: time and space.
The Corticella, small courtyard of the fortress, welcomes visitors with voices, noises, the sounds of those who lived there in the past.
At the entrance of the tower clock begins the journey into the past of the castle and its inhabitants, from the recent history of the bombing of the Second World War, through the prisons, in use since the eighteenth century to come, through the rooms where the Guard Captain lived, the events of the bell and clock which have puntuated the time of the community since the XVI century.

The South-East tower, with its wide view, puts in comparison the modern landscape with the late medieval one, that could be observed from the lookout points and showing the ancient rural village gathered around the church and its cemetery.
The guard is now the center of the museum, here are collected and arranged the scientific information and oral testimony. Through the voices of those that tell about personal and collective life, as the Countess Maria Alessandra Gentili Calcagnini d'Este, it is possible to return a dimension of orality and memory in part lost.

Archaeological surveys
From 1998 to 2006, the study group directed by Sauro Gelich, professor at the University Ca 'Foscari of Venice, conducted the work, analyzing the first masonry to distinguish the different stages of evolution, following alongside the investigation of buried basins.
Archaeological research has brought to light not only the ancient church of San Bartolomeo and the cemetery, but he also found the low-medieval village (XIII-XIV century), and the phases of life before the foundation of the castle, until the second half of the tenth century. The discovery of some graves in the eastern portion of the cemetery dating from the eleventh century and the discovery of Ottonian money from Pavia mint of 962-977, have indeed confirmed the presence of a high-medieval settlement.
The work of archaeologists, together with that of anthropologists, has allowed to know the rural community that, in the X-XI century, was gathered around the church building, next to which, in the thirteenth century, the Modena Municipality decided to build the castle. We know that this community gave rise to a stable settlement, with buildings, streets and squares, and that this settlement was deleted between the fourteenth and fifteenth century, when the Pio family turned the castle into his residence.
The studies on the buried, including DNA analysis, have provided information on sex, age at death, on some physical characteristics, diseases suffered by the inhabitants, their discontinuous character (hereditary) and those ergonomic (due to the development of intense and repetitive work activities). It was also possible to include for the first time and clearly the changes in funerary rituals between X and XVI century. The dead were buried without a proper funeral, however, were found rosaries and many items of clothing such as buttons, buckles and rings. The excavation also found furniture and working tools in metal, bone and glass. Particular attention shall have the pottery, a collection of fragments starting from the late Middle Ages until the nineteenth century.
Year after year, it appeared, therefore, an archaeological site of regional significance and of great interest for the quality and consistency of structures and tombs found and at the same time, a case study for the methodology adopted and the effective collaboration between archeology and architectural design.

In view of the extraordinary situation caused by the virus emergency, the new timetables and the arrangements for visits should be consulted on the website.