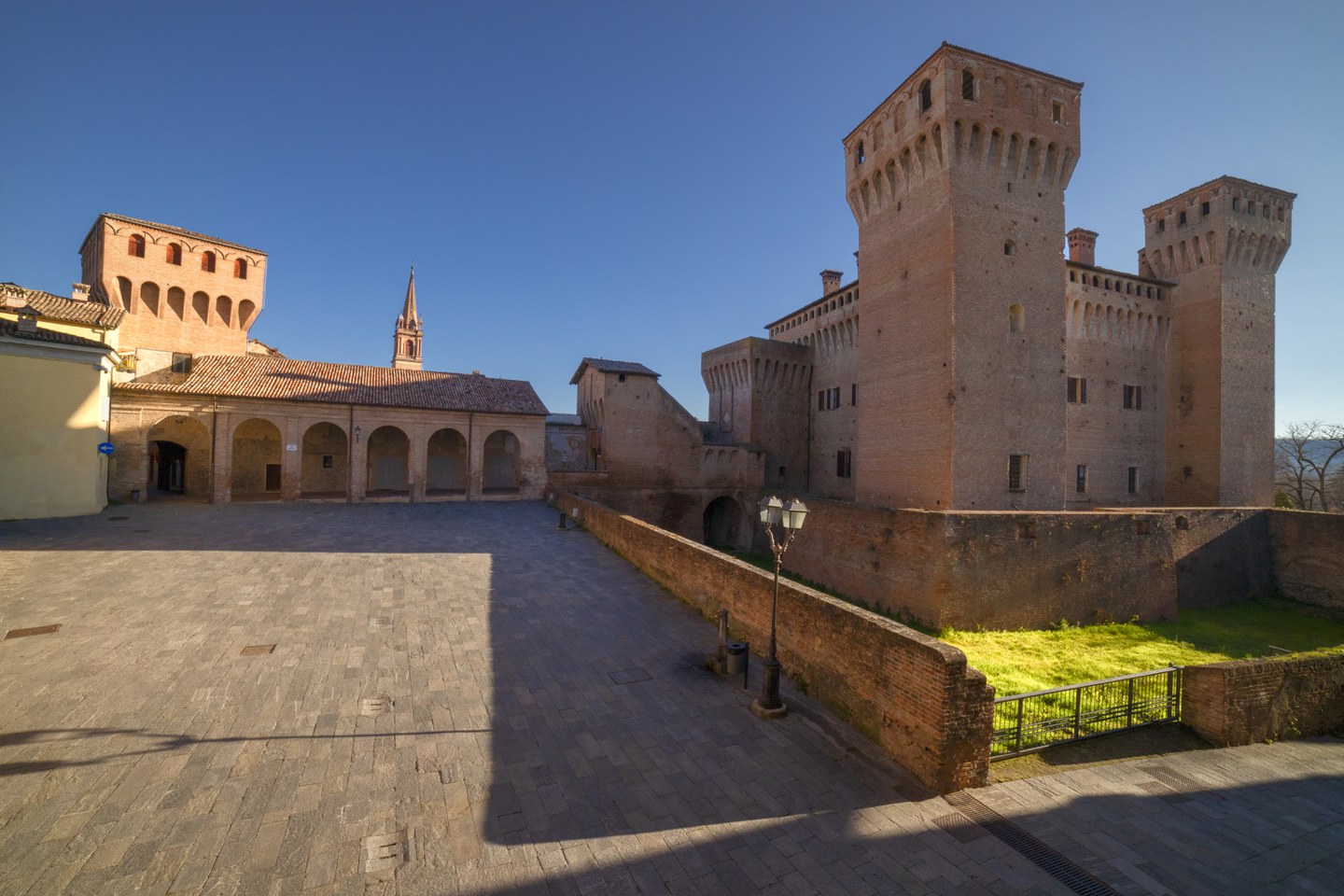 The Moretta variety of cherry in particular is a highly valued native cultivar and is now protected by a PGI (protected geographical indication) designation.

The area was occupied as early as the beginning of the Bronze Age by the Terramare culture, followed by the Etruscans and then the Gauls. The town’s name is Roman in origin and derives from the Latin word “vineola,” a reference to the cultivation of grapes that the Romans practiced in the soil of the Panaro River floodplain. The first document that mentions a settlement in the area dates to 826 CE and refers to the Nonantola Abbey. During the medieval period, under the dominion of the Bishop of Modena, Vignola developed as a defensive outpost. The Rocca Fortress has undergone a number of transformations over the centuries, and what we see today is the result of a 15th-century reconstruction by the Contrari family, who took possession of the area in 1247 and controlled it for two centuries before ceding the land to the Boncompagni nobles.

Vignola is fascinating both for the physical context in which it is situated, surrounded by fruit trees whose blossoms create a breathtaking sight during the Spring, and for its history and architecture. Vignola gave birth to such important historical figures as 16th-century architect Jacopo Barozzi, known as “Vignola,” and Ludovico Antonio Muratori, an Italian historian and scholar who spanned part of the 17th and the 18th centuries. The Rocca Fortress shouldn’t be missed, nor should the interior of Palazzo Contrari-Boncompagni and its wonderful spiral staircase by Barozzi.

The splendid Rocca di Vignola Fortress, with its richly decorated interiors, is medieval in origin. According to historical evidence, it was built in the 8th century by the Abbot of Nonantola for the purposes of defending the Abbey’s lands. Over time, the Rocca underwent numerous alterations until, in the 15th century, it was transformed into a patrician residence for the Contrari family. In 1507, it passed to the family of Boncompagni Ludovisi who owned it until the middle of the 20th century. After additional restorations and reconstructions, the Rocca we see today is a majestic quadrilateral dominated by three towers and surrounded by a drawbridge with a moat. A climb to the top of the towers to enjoy the view of the city and surrounding countryside is almost mandatory! Among the rooms of the interior, the small Cappella dei Contrari is an authentic gem for its extraordinary well-preserved frescoes of stories from the life of Christ. We recommend a guided tour to get to know the details of this impressive site.

In Piazza dei Contrari, just across from the Rocca, is Palazzo Contrari-Boncompagni, better known as Palazzo Barozzi because of its delightful spiral staircase designed by the architect Jacopo Barozzi. A masterpiece of architecture of the 1500s, the staircase is a striking, self-supporting structure in the shape of a sinuous spiral with 106 steps. The Barozzi Staircase is fascinating for its architecture as well as for its artistic beauty.

Here in Vignola, as throughout Modena Province, you can sample the best known local specialties, including PDO (protected designation of origin) Parmigiano-Reggiano cheese, zampone and cotechino (dishes made from a mixture of ground pork flavored with herbs and spices and stuffed into the hollowed-out lower-leg of a hog), prosciutto and other signature cured meats, fresh filled pastas, gnocco fritto (pastries something like a deep-fried dumpling), crescentine (a round, flat bread, flavored with spices and generally eaten with cold cuts, cheese, or spreads), Lambrusco wine, and PDO (protected designation of origin) and PGI (protected geographical indication) balsamic vinegar. Other area specialties include the renowned local pastry known as the Torta Barozzi, invented by the historic Pasticceria Gollini. Cherries in many forms, including preserved in hard spirits, are a standout here as well, and fruit-growing remains an important local industry.

The Caffé-Pasticceria Gollini, in the historic centre of Vignola since 1887, looks out from under the portico of an old building and it'is famous for the production of those cakes known as Torta Barozzi and Torta Muratori, so-called in honour of the architect, Jacopo Barozzi, known as Il Vignola, and the historian, Ludovico Antonio Muratori. The two cakes are made by hand in the old way, using absolutely genuine materials without colouring or preservatives, and their recipes have been handed down by the Gollini from generation to generation. Even today, the genuine recipe remains scrupulously hidden within the walls of the family workshop: The proportion of ingredients, the dough, the kneading and baking phases, and also the nature of the top quality products without chemical preservatives all remain top secre

The Cherry Blossom Festival celebrates the spectacular cherry trees in bloom throughout the Panaro River Valley. This very popular event includes activities such as street markets and a parade of floats decorated with flowers.

This literary festival brings together the communities of the Terre dei Castelli area to celebrate the magic of verse.

The Percorso Sole (Sun Path) skirts the Panaro River for thirty-four kilometers of evocative scenery and historical markers. Walkers or bikers can follow the trail toward the Sassi di Roccamalatina Regional Park.

Located in the Modenese Appennines, the Sassi di Roccamalatina Regional Park covers some 5,700 acres between the towns of Marano sul Panaro, Guiglia, and Zocca. The “Sassi,” the three rocky pinnacles that give the Park its name, can be seen in the interior.

Recognized by the European Union as a unique protected area, the Park conserves an enormous biodiversity of flora and fauna. Over eighty different bird species nest here, including peregrine falcons, and more than forty mammal species are found as well, among which are wolves, roe deer, fallow deer, badgers, foxes, stone martens, and porcupines. The Park is perfect for hiking and nature walks. Over 100 kilometers of trails and twelve different itineraries can be covered on foot, on horseback, or by mountain bike.

The Vignola to Modena Bike Path

Following the 19th-century train route that once connected Modena and Vignola, along which a few of the old railroad ties can still be seen, this picturesque bike path is ideal for outings alone or with the family.

The path’s eighteen kilometers run among old toll booths, farmhouses, courtyards, and gardens and cross the beautiful Modena countryside with its fields of alfalfa and corn alongside farmyards and well-tended plots of vegetables.

The best time to visit Vignola is in the Spring when the cherry trees are in bloom (between March and April), a spectacle that will take your breath away. In these natural surroundings, enjoy the cheerful atmosphere of local celebrations and festivals. Fall, with its bright colors and mild temperatures, remains an excellent alternative.

Madonna della Pieve Sanctuary - in Vignola
In the town’s suburbs is to be found the Sanctuary of Madonna della Pieve, according to tradition erected on the foundations of a pagan temple from the times of Liutprand, king of the Lombards.
Barozzi palace
Palazzo Contrari-Boncompagni is an elegant Renaissance palace which is almost entirely morphologically intact. It was built between the early 1560s and 1567, on order of Ercole (Hercules) Contrari the Elder (a feudatory of Vignola) by the "master mason" Bartolomeo Tristano of Ferrara, on the design of the great Vignolese architect Jacopo Barozzi, who is known as The Vignola; for this reason, the palace is also known as Palazzo Barozzi.
"Augusta Redorici Roffi" Museo Civico - Vignola
The exhibition is divided up into two main routes, a palaeontological and a geo-mineralogical route with the addition of a shorter route on the subject of paleo-anthropology. It is designed according to didactic criteria; a general introduction on the subject matter followed by reference to finds in situ placed in the relevant reference environment.
Municipal Historical archive of Vignola
It preserves a documentary collection divided into 7 chronological sections inventoried, starting from the year 1320 and a collection of maps and drawings.
The fortress of Vignola, “La Rocca”
"La Rocca" is probably the most important and beloved symbol of geographical and cultural identity for the people of Vignola. It is also a sign of cultural uniqueness in Vignola's historical experience, as well as in the past of the whole surrounding area at the foot of the mountains, where the Emilian cultural basis combined with several different contributions. The multiple variations that can be observed in the "Rocca" reveal this melting pot of Italian and even European influences.
Contact details