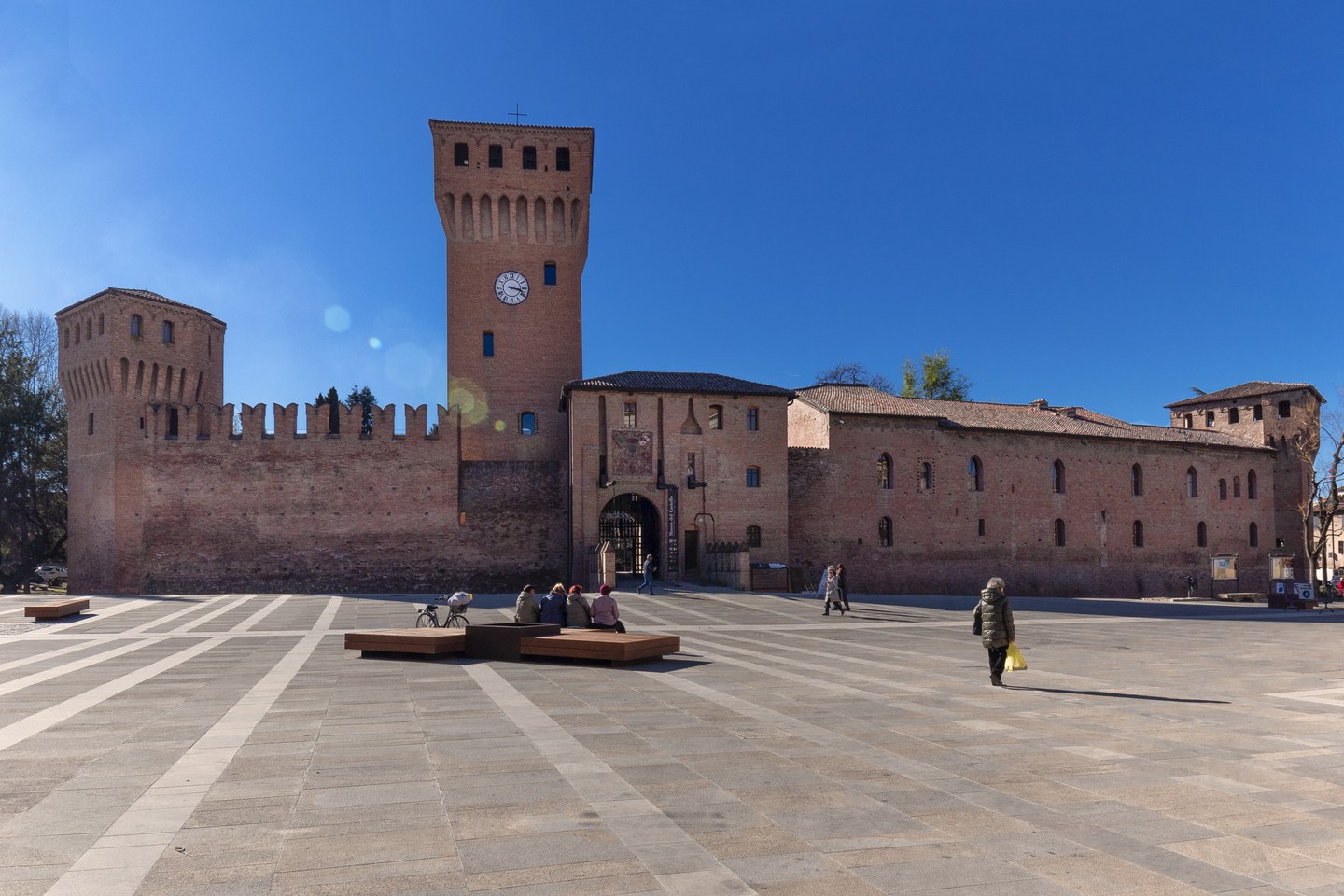 Built by the City of Modena in 1201 on the site of an ancient village, Formigine was transformed with the arrival of the Adelardi and the commander of the guard, Azzo da Castello. As the fifty-seven frescoes in the Sala delle Vedute in nearby Spezzano Castle recount, Formigine passed into the hands of Marco I of the Pio family in 1405, together with large holdings in the foothills. Under the dominion of the Pio family, the fortress took on the appearance that it has today. Alongside the medieval fortification, a palazzo that was the residence of the Lords of Carpi was built along with a clock tower, becoming the seat of government. The people, meanwhile, were slowly moved outside the city walls, and the church became the Pio chapel. When Marco III of the Pio family died without an heir in 1599, Formigine fell under the control of the Este Dynasty, and so it remained until 1648 when it was ceded to Marquis Mario Calcagnini, a ducal official. Bombing during the Second World War caused serious damage to the town, but, after the war, the municipal administration purchased the entire complex and restored the castle for use as the town’s city hall.

In more recent times, the city offices were moved, paving the way for a major restoration that turned the buildings into a museum open to the public.

Formigine is a quiet town with green at its heart. Historically a residential area, Formigine is the perfect destination for a leisurely stroll along tree-lined avenues or a bike ride on narrow streets and through rural parks. The Parco della Resistenza (“Resistance Movement Park”) that surrounds Villa Gandini is particularly beautiful and is home to two majestic Ginkgo trees that are a marvelous sight in the Fall.

The Formigine Castle and the Calcagnini Fortress

The Calcagnini Fortress, which was built by Marquis Mario Calcagnini after Formigine came under his control in the mid-1600s, is, in a sense, the town’s living room, and is used for functions and events of all kinds. Today, in addition to rooms that house various government offices and a restaurant, the Calcagnini Fortress is home to the Archaeological Museum, where history is told through multimedia installations. A tourist-information office and bookshop are also located there and provide information about the Fortress and other sites of interest in Modena Province.

Not far from old town and the Formigine Castle stands Villa Gandini, an extraordinary example of neo-classical architecture and today the home of the Municipal Library. The Villa lies within the Parco della Resistenza (“Resistance Movement Park”), which honors the organized resistance against the Nazi-Fascist invasion.

Villa Gandini became the property of the Gandini Counts, a noble family of Modena linked to the Estes, beginning in 1791. The Villa was designed by architect Francesco Vandelli and still houses paintings and other decor created by well-known figures in the architectural and artistic panorama of the time. Villa Gandini is one of the more than eighty villas and residences in the Formigine area and can be visited on days when the Library is open. On the southern side of the Villa, the park’s twin symbols stand: two majestically beautiful Ginkgo trees originally from China.

Just as does the rest of Modena Province, Formigine offers visitors the chance to sample the best known delicacies of local traditions, including PDO (protected designation of origin) Parmigiano-Reggiano cheese, zampone and cotechino (dishes made from a mixture of ground pork flavored with herbs and spices and stuffed into the hollowed-out lower-leg of a hog), prosciutto and other signature cured meats, fresh filled pastas, gnocco fritto (pastries something like a deep-fried dumpling), crescentine (a round, flat bread, flavored with spices and generally eaten with cold cuts, cheese, or spreads), Lambrusco (an ebullient, full-bodied wine ), and PDO (protected designation of origin) and PGI (protected geographical indication) balsamic vinegar, the “black gold” that has passed for centuries from generation to generation and is still today a source of great pride.

In Spring, Formigine and its hamlets host a wide range of events, including Castello in Fiore (“the Castle in Bloom”), the Spring Festival, the Magnalonga food and wine tour, the French Market, the Trentino-Alto Adige Market, and the Festival of Colombarone.

Many cultural events are organized during the Summer, including the medieval fair, I Ludi di San Bartolomeo, on August 24. The town center comes alive with historical reenactments, and the event concludes with a grand finale of fireworks and a light show that recalls the fire that once nearly destroyed the Castle.

Settembre Formiginese (September in Formigine) is the most important festival of the year and offers markets, food stands, events of all kinds, shows, concerts, conferences, exhibitions, and much more throughout the month.

Winter begins in November with the Formigine Dolce Europa food festival and concludes in December with a Christmas Village.

Formigine hosts concerts by the Spira Mirabilis Orchestra all year round, and an auditorium of the same name is home to theater, concerts, readings, and conferences. The auditorium’s complete and updated program is online at http://www.visitformigine.it/?lang=en

The Pieve of Colombaro, or Colombaro Parish Church, is one of the oldest monuments in the Formigine area.

The Pieve of Colombaro, a single-nave church flanked by an eighteenth-century bell tower, has been restored to its original Romanesque style. The external stone façade of square sandstone blocks and a small mullioned window, visible between the church and the rectory, are all that remain of the ancient building. The façade was completely rebuilt during a 1963 restoration. The history of Colombaro is linked to the founding of the parish church dedicated to St. James (San Giacomo) by Matilde di Canossa and mentioned in a document from 1127. The religious complex included, in addition to the church and the convent, a hospice where pilgrims could shelter, known from as early as 1162. The location of the Pieve di Colombaro and its dedication to St. James, which recalls the more famous route of Santiago de Compostela, known in English as the Way of St. James, means that the church was a rest station on one of the medieval roads traveled by pilgrims to Rome and Jerusalem.

The Modena Golf and Country Club

Centrally located and easily reachable from the main towns in Modena Province, the Modena Golf and Country Club offers ample greens and tees as well as five artificial lakes that make it a perfect course for professionals and non-professional players alike. The Club also boasts a restaurant that offers sophisticated local delicacies, a café, two swimming pools, and rest areas with services for players and their guests.

The mild climate makes Spring and Fall the best seasons for a visit to this part of Italy. If you’ll arrive between October and November, be sure to visit the Parco della Resistenza (“Resistance Movement Park”) to photograph the Gingko trees’ spectacular foliage. Because of its exhilarating calendar of cultural events, however, Formigine lends itself to a visit in every season of the year.

SS Annunziata Church in Formigine
The Church of the Annunciata dates back to 1643 and is also known as the "Chiesa Rigata" for the facade with transversal bands, black and white.
The castle of Formigine
The Castle displays a wonderful example of the architectonic evolution of a medieval fortification into a Renaissance manor. The medieval phase coincides with the stronghold (the rocchetta), the oldest fortified nucleus, whereas the Renaissance phase coincides with the marquis’ palace.
Villa Gandini (former villa Aggazzotti)
The Gandinis, a noble family from Modena related to the Este court, became owners of the building in 1791; at that time it was an eighteenth-century hunting lodge, smaller than it is today.
Museo del Castello di Formigine (mUSEUM OF THE CASTLE)
The museum is developed in episodes, suggested by the actual place where they are set, along two main coordinates: time and space.
Pieve di San Giacomo di Colombaro
The Romanesque church is situated near the ancient route of Via Vandelli. The building already stood in 1127 when Fredolfo, provost of the Cathedral of Modena, granted land to the Church of Saint James the Apostle, situated in Colombaro, in honour of Santa Maria di Marola.
Contact details