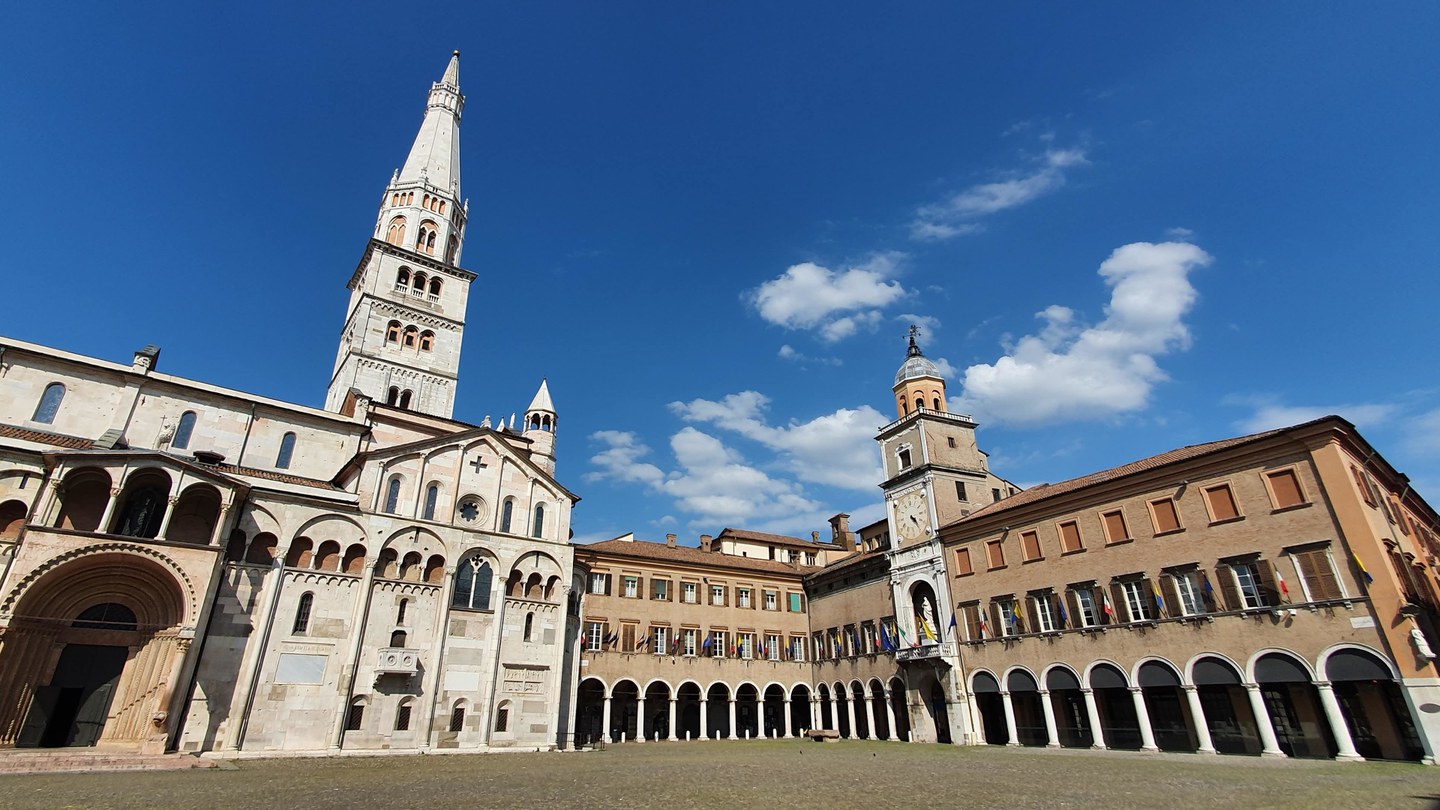 It may surprise you to learn that architectural treasures of unsurpassed beauty can be found in the heart of Modena. So exceptional is this complex of buildings that, in 1997, UNESCO recognized them as a World Heritage Site.

To contemplate these splendid buildings is a jaw-dropping experience, and understanding the story and the particulars of their design will help make clear why this site is so precious—not only for the city of Modena but for all of Europe.

One of the first visits you’ll want to make is to the Cathedral, the Ghirlandina Tower, and the inviting Piazza Grande. The route we suggest here takes you on a journey of discovery to Modena’s World Heritage Site, a delightful complex of structures that are deeply embedded in the hearts and imaginations of Modena’s residents.

Our advice, which is useful almost anywhere you go in and around Modena, is to take things slowly, if you can. That way you’ll be able to appreciate both the small and the large details and get the most out of your visit.

If you’re short on time, though, think about setting aside at least a half day to see the World Heritage Site, even if it means skipping some of the particulars.

We suggest getting an early start on the morning, perhaps after a good breakfast at a centrally located café.

You may have heard of the “Modena breakfast,” which features Gnocco Fritto (pastries something like a deep-fried dumpling) for dipping into your cappuccino. If you’re looking for an insider experience, this is the way to start your day.


First stop: morning. The Cathedral and its museums

The Modena Cathedral is an outstanding example of Romanesque art and is known the world over. Its audacious architecture has amazed visitors for centuries. The Cathedral was designed by the great architect, artist, and builder Lanfranco, who incorporated the artistry of another outstanding master, the sculptor Wiligelmo and the first stone in the construction of the Cathedral was laid on June 9, 1099.

Wiligelmo and his school created the ornate corbels and the capitals atop the columns, the main door, the reliefs illustrating the Book of Genesis on the façade, the Porta della Pescheria (the Fish Market Gate) on the Cathedral’s northern side and the Porta dei Principi (Princes’ Gate) on the southern side.

The so-called “Campionese-masters,” who continued work on the Cathedral more than a century later, designed the wide Porta Regia that opens out onto Piazza Grande, the beautiful rose window on the façade, and, inside the Cathedral, the marble parapet that separates the sanctuary from the nave.

The exterior of the Cathedral, built to honor St. Geminianus (San Geminiano), the Bishop and patron saint of Modena, is fashioned of stone from the Roman-era city Mutina (the ancient name for Modena). Called a “Bible in Stone” for its astonishing depictions-in-relief of stories from the Bible, the Cathedral today speaks of faith and of life on Earth just as it has for centuries.

A few steps from Modena Cathedral, almost directly in front of the Porta della Pescheria (the Fish Market Gate), are the Museums of the Cathedral, and we suggest paying them a visit to round out your experience.

The Museums of the Cathedral are dedicated to the history of the Cathedral and are divided into two collections: the Lapidary Museum and the Museum of the Modena Cathedral. Among other treasures, the Lapidary Museum houses the famous “metopes,” eight sculptural reliefs that depict monstrous and imaginary beings and which originally appeared on the roof projections. The Museum of the Modena Cathedral exhibits art works and furnishings that bear witness to the Cathedral’s vitality over the centuries.

When lunchtime rolls around, you’ll have nothing but choice when it comes to finding a place to enjoy a tasty time-out.

Second stop: afernoon. The Ghirlandina Tower and the Palazzo Comunale

Modena’s historic district is full of options, both traditional and not, where you can enjoy a refreshing pause. Very near the Cathedral, for example, is the Albinelli Market, the historic marketplace for Modena’s residents and a sight not to be missed. Find something to enjoy at one of the market’s many food stalls, and take a seat at a table to take in the bustling street scene.

After lunch, your journey among the artistic splendors of Modena’s UNESCO World Heritage Site continues with a visit to the fascinating Ghirlandina Tower, beloved by Modena’s citizens and the undisputed symbol of the city. The Ghirlandina Tower is the bell tower of the Modena Cathedral, and it has played an important role in the life of the city for centuries: its bells told the city’s residents the time, signaled that the gates in the city walls were opening, and called people to safety when danger threatened.

The summit of its eighty-six meters offers a breathtaking 360° view of the city as well as a special perspective on Piazza Grande below, the city’s eternal heart.

A stroll through Piazza Grande is enjoyable at any time of day, and the mood shifts with the movement of the sun. In the morning, you’ll experience the flurry of activity that marks the beginning of the day; in the afternoon, enjoy the more relaxed rhythms that take over after lunch; and, near sunset, allow yourself to be enchanted by the shades of pinkish light reflected on the Modena Cathedral and the Ghirlandina Tower.

Another high point in Piazza Grande is the Preda Ringadora (the “Haranguing Stone”) across from the stairway at the entrance to the Palazzo Comunale, and La Bonissima, the statue of a female figure installed at one corner of the building.

Finish up the day with a visit to the Palazzo Comunale, which serves today as Modena’s city hall just as it did during the Middle Ages. The beautiful and historic rooms inside are open to visitors as is a particular treasure … the city’s vinegar cellar, managed by the Traditional Balsamic Vinegar Makers’ Guild, where rows of barrels contain the city’s famous “black gold,” Modena’s traditional balsamic vinegar.

That’s the end of this itinerary, but it’s not the end of the marvelous experiences that await you in Modena. We’re standing by with any advice or help you need to get the most out of your time in Modena, so don’t hesitate to contact us. We’re here to help.