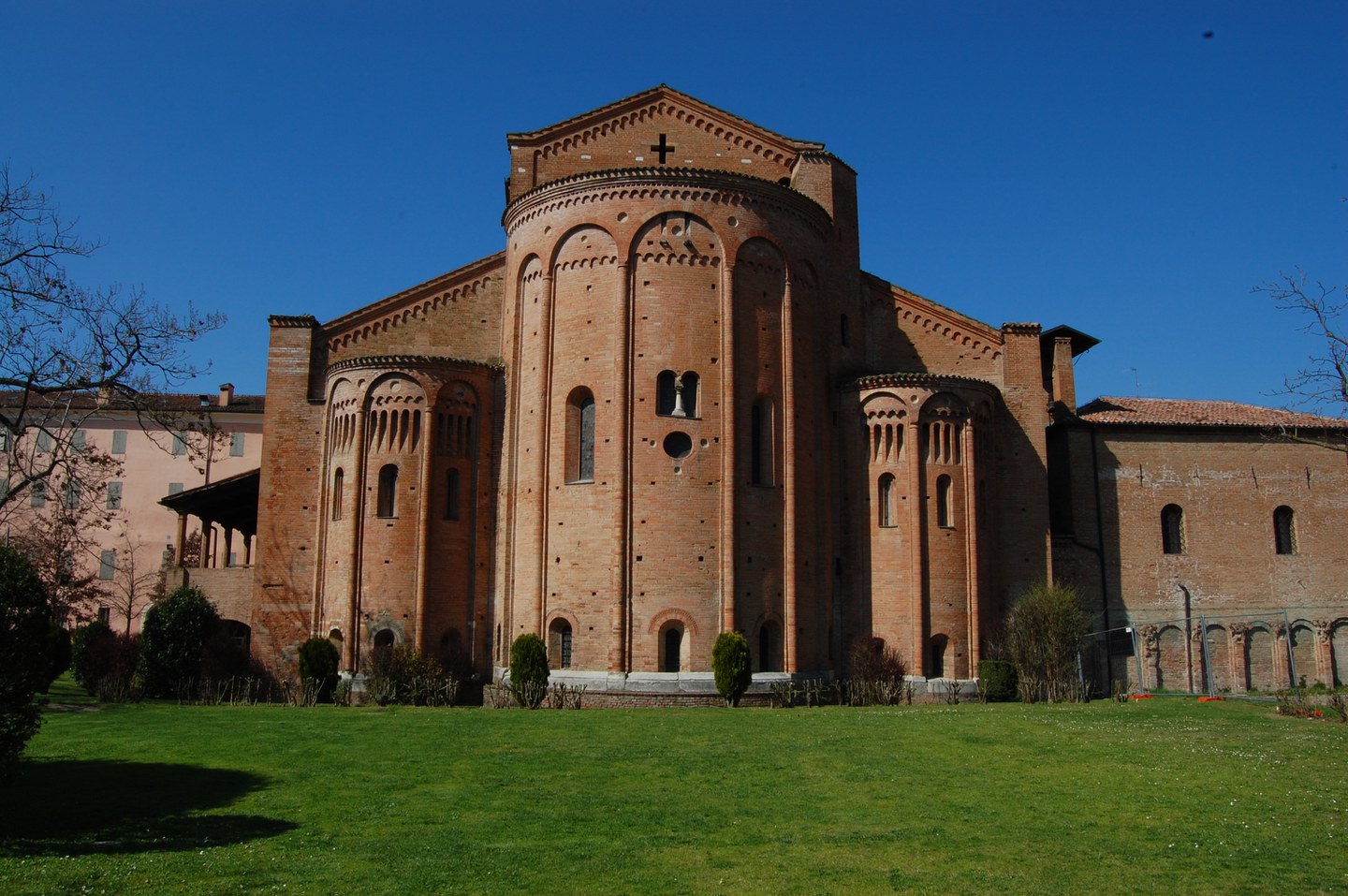 Nonantola is located about ten kilometers east of Modena on the so-called: Nonantolana” (Strada Provinciale 255).

The first area settlements date to the Bronze Age, with the Redù Terramara (17th-12th centuries BCE). The area was subsequently, occupied during the First and Second Iron Ages and later colonized and named by the Romans. The Nonantola Abbey, on the other hand, dates back to the Lombard period and is closely tied to the history of the town. The Benedictine monk Anselm, at the behest of the Lombard King Astolfo, founded the Abbey in 752, dedicating it a few years later to St. Sylvester (San Silvestro) and serving as its first abbot. The position chosen for the Abbey—on the border between the Lombard duchy and the Byzantine Empire—was politically and militarily strategic. As a result, Nonantola became the seat of one of the most important and richest European monasteries during the Middle Ages, nurturing the expansionist visions of the bishops of Modena and Bologna and of other powerful families.

From the twelfth century onward, the city was alternately claimed by Modena and Bologna who, during their respective dominions, built the Torre dei Modenesi and the Torre dei Bolognesi, now home to the Nonantola Museum. When, the Este family took control of the city in 1412, the Abbey was in a state of decay and abandonment. With the French Revolution and the suppression of religious orders, however, control over the Abbey was assumed by the Bishop of Modena who remains the abbot today.

In Nonantola, traces of a high and noble history merge with a culture of country people whose presence was marked by wisdom and love for the land. One good reason to visit is, of course, the Nonantola Abbey complex, but a pleasant stroll through the small historical center reveals such ancient treasures as the parish church of St. Michael the Archangel (San Michele Arcangelo), the church of St. Mary beyond the Walls (Santa Maria Fuori le Mura), and the two medieval towers, the “Bolognesi” and the “Modenesi. If you like fine food, meanwhile, and enjoy sampling local cuisine, there is no lack of delicious opportunities here.

Reopened in 2018 following post-earthquake restoration, the Abbey Complex’s 1,300 years of history make for a fascinating visit. Inside, on the main altar, the reliquaries of Pope St. Silvester I, the patron saint of Nonantola, to whom it owes its name, are conserved.

Nothing remains of the original building, however. In 1117, damage from another earthquake required the Abbey to be completely rebuilt in Romanesque style. Today, the imposing brickwork bulk of the building is marked by the marble jambs and architraves of its main door, built by artists of the Wiligelmo school. The interior is divided into three naves and is striking for its majesty, sobriety, and simplicity. The most fascinating area is the crypt. Its sixty-four columns, topped by beautiful capitals (some of which date to the Lombard period), dramatically filter the light. The reliquaries of St. Anselm, the founder, are kept here. Don’t miss a visit to the adjacent Archive and Library, on the first floor of the Abbey’s palazzo, where documents attesting to the Abbey’s history from the 8th to the 14th century are kept. The collection includes more than 4, 500 parchments, which 131 date to earlier than the year 1000. The Benedictine and Diocesan Museum of Sacred Art, on the second floor, houses the Abbey’s Treasury, where a 10th-11th century reliquary cross (the case was made in 1679), is believed to preserve a fragment of the Holy Cross.

The Bolognesi Tower and the Nonantola Museum

The Bolognesi Tower, built in 1307 by the conquering armies of Bologna, has a square base and rises a bit more than thirty-eight meters in height. Today, it houses the Nonantola Museum where the history of the town and surrounding areas is told from the Bronze Age to the present. An exhibit on the ground floor is dedicated to the “Jewish Children of Villa Emma: 1942-1943.”

Villa Emma is a residence on the edge of the town that, between 1942 and 1943, was the site of a significant episode in civil resistance against the Nazi Occupation. Seventy-three Jewish children—the “Children of Villa Emma”—were housed here after being saved from the Nazis by Nonantola’s residents, who then did everything in their power to organize the children’s escape to Switzerland. After being abandoned for many years, Villa Emma was restored in the 1990s and is now used for meetings, weddings, parties, and other ceremonies, and is therefore not open to the public for visits. The loft holds the barrels of traditional Modena balsamic vinegar that belong to the Leonardi Giacobazzi family.

The Balsamic vinegar production in the Palazzo of the Nonantola Partecipanza

The Palazzo of the Partecipanza (Nonantola Farmers’ Cooperative, a collective of landowners founded in the Middle Ages), is located in Piazza del Pozzo. The Palazzo houses a permanent exhibit and an “educational” balsamic vinegar cellar, as well as three “batteries” of seven, six, and five barrels. The Palazzo is open to visitors with reservations, and tastings of PDO (protected designation of origin) balsamic vinegar are offered.

Like other towns in Modena Province, Nonantola offers opportunities to sample such area specialties as PDO (protected designation of origin) Parmigiano-Reggiano cheese, zampone and cotechino (dishes made from a mixture of ground pork flavored with herbs and spices and stuffed into the hollowed-out lower-leg of a hog), prosciutto and other signature cured meats, fresh filled pastas, gnocco fritto (pastries something like a deep-fried dumpling), crescentine (a round, flat bread, flavored with spices and generally eaten with cold cuts, cheese, or spreads), Lambrusco wine, and PDO (protected designation of origin) and PGI (protected geographical indication) balsamic vinegar, our “black gold.”

Located on land belonging to the Farmers’ Cooperative and accessible by bike as well as by other means, the Torrazuolo Ecological Restoration Area is one of the Emilia-Romagna Region’s most important natural areas. Paths wind through the forest and the marshlands, which home to a wide variety of wild animals and water birds. Viewing sheds built by the Italian League for the Protection of Birds (LIPU) provide opportunities for bird and animal watching. The Casa della Guardia, at 41 Via Due Torrioni, houses a learning center where workshops and guided tours are offered by appointment.

Cyclists will enjoy the peaceful excursion that begins in front of the Abbey and follows the Via Romea Nonantolana to the splendid Villa Sorra in Gaggio.

Spring and Fall are the best seasons for a visit because of the mild climate. Much depends on the kind of activity you’d like to plan, of course, because the historic beauty of the town of Nonantola and the Abbey make for a pleasant visit at all times of the year

Nonantola - The parish church of San Michele Arcangelo
Just a stone’s throw from the Abbey lies the Parish church dedicated to the archangel St Michael. Founded by the Abbot Theodoric somewhere between the years 870 and 887 AD, the building, originally of modest proportions, was destined to house his mortal remains, amongst other functions.
Villa Emma
Villa Emma was built between 1890 and 1898, commissioned by Commendator Carlo Sacerdoti, who affectionately dedicated it to his wife, Emma Coen. The plans were entrusted to architect Vincenzo Maestri, President of the Academy of Fine Arts and one of the main figures in academia in Modena.
Museo di Nonantola - Torre dei Bolognesi
The Museum is set up in the fourteenth-century “Torre dei Bolognesi” (Bolognesi Tower) and traces the history of Nonantola from the contemporary age to Prehistory through a backward journey marked on four steps, by using archaeological photographic and documentary sources.
San Silvestro abbey
It is a suggestive example of Romanesque architecture with its imposing, compact brick structure. It is characterized, in particular, by the Portal with marble uprights and architraves by the Wiligelmo school and the original apse of remarkable beauty.
Benedectine museum of Nonantola and museum of dioceses sacred art
The Museum is located on the second floor of the Nonantola Palace of the Abbey. Here, visitors can admire ancient documents and the Abbey's treasures as well as explore the diocese's singular historical-artistic heritage.

WHERE WE ARE
Nonantola, Modena