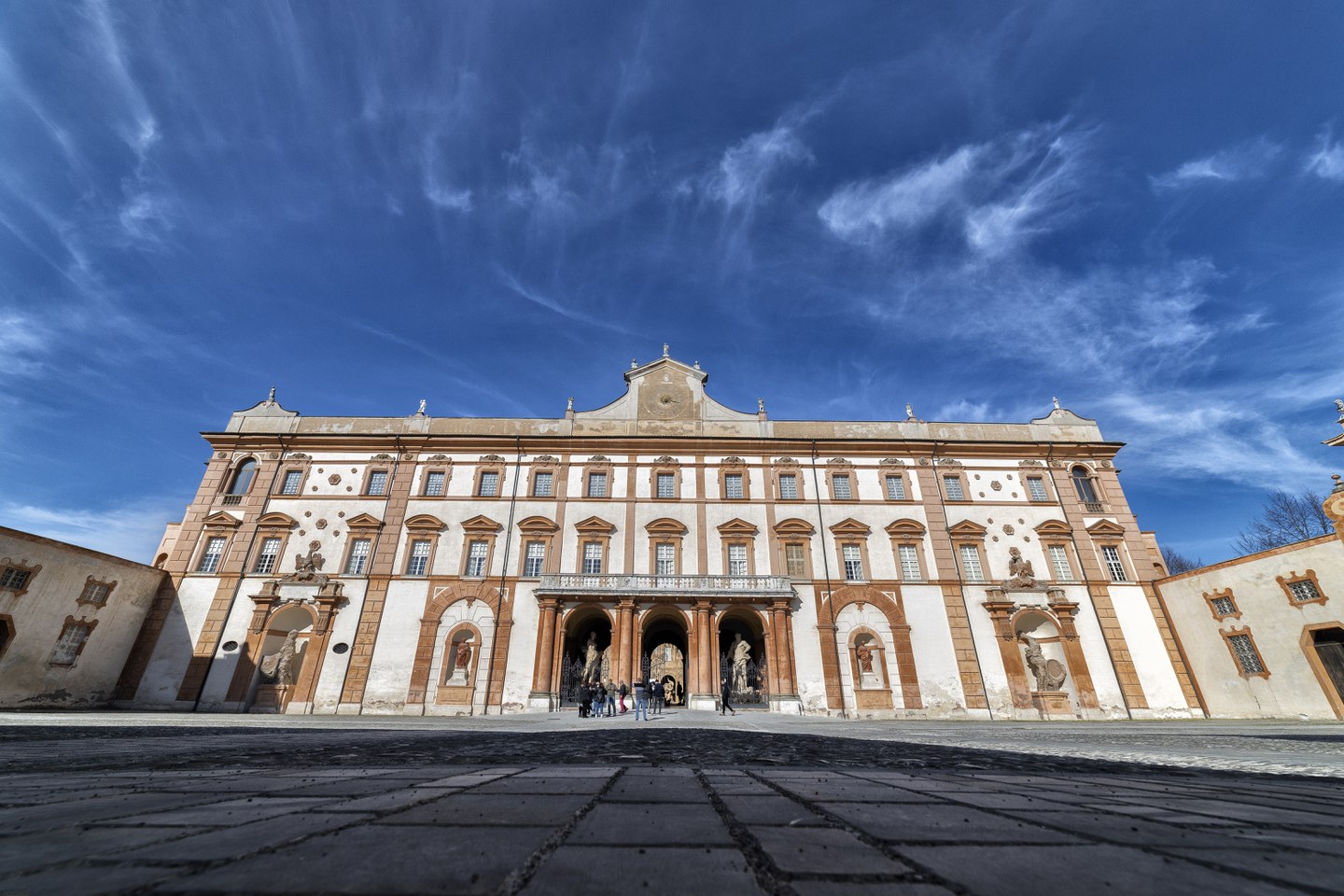 Likely built on the site of a Roman settlement, known from archaeological finds recovered in the hills of Montegibbio, Sassuolo was ruled by the Canossa family until the first decade of the year 1000.

In the 15th century, Sassuolo was conquered first by the Della Rosa family and, later, by the Estes, who ceded the territory to the Pios of Carpi before taking it back again in 1599.

Este rule gave the city its greatest economic prosperity and cultural and artistic growth, one expression of which is the extraordinary Palazzo, transformed under the rule of Duke Francesco I from a military fortress into one of the Este “Delights.”

Lively, with a rich calendar of programs and activities, Sassuolo offers a variety of historical and cultural highlights, including the splendid Ducal Palace. We recommend taking some time here to discover and appreciate the way the locals live. Be sure to visit the area’s many points of interest and participate in the town’s cultural and artistic activities. A stop at the relaxing Salvarola Hot Springs deserves a day of its own.

Piazza Garibaldi, which the town’s residents know as Piazza Piccola, or the “little piazza,” is the heart of Sassuolo. The Clock Tower, the symbol of the town, faces the horseshoe-shaped piazza. Along the piazza’s edge, a lovely colonnade houses shops of many kinds, some of them, such as the Drogheria Roteglia grocery, of historical interest. The layout of Piazza Garibaldi dates to the 16th century, when Alessandro Pio ordered the piazza to be built along with the Palazzo della Ragione and the Osteria della Posta. In 1676, the Este Duke Francesco II hired the ducal architect, Antonio Loraghi, to construct the clock tower, known as the “campanone” and, twenty years later, the theater. In 1775, the Este Duke Francesco III commissioned the ducal architect, Pietro Bezzi, to create a colonnade on three sides of the piazza along with two narrow canals. They are all that remains of the open aqueduct that once crossed the town’s historic center.

Piazza Martiri Partigiani (the “big piazza”) looks onto the Church of St. George (San Giorgio), the city’s patron saint who is celebrated each April 23rd. This genuinely ancient church dates to 1300 and, over the centuries, has become a rare example of Late Baroque style.

In Piazzale della Rosa, which owes its name to the city’s first noble family, stands the splendid Ducal Palace and the Church of St. Francis (San Francesco), designed by the architect, Bartolomeo Avanzini, and built by Francesco of Este in the 1600s. Inside the church is the Santo Tronco, a miraculous wooden crucifix, venerated by Sassuolo’s citizens and carried in procession through the city streets every Maundy Thursday.

The Drogheria Roteglia stands on Piazza Garibaldi, and you shouldn’t miss a chance to step inside this historic grocer’s shop from 1848. The original furnishings and design—including the squeaking of the floor boards, the giant candy jars, and the smell of wood and spices that mixes with the aroma of coffee—will transport you back in time. Tastings of traditional local liqueurs are available here, including sassolino and nocino (liqueurs made with anise and with hazelnuts, respectively), all of them still produced in the old way at the Roteglia Factory 1848 next to the shop. The Drogheria Roteglia is a unique occasion to surround yourself in the shop’s authentic atmosphere, browse the unusual décor and vintage photographs, and enjoy a delicious cup of coffee.

The Ducal Palace of Sassuolo

The Palazzo Ducale, a “Delight of the Duke of Este,” served as a summer residence and official seat of the court and is one of the most important Baroque buildings in northern Italy.

The Palazzo dates to 1634, when Duke Francesco I of Este commissioned the best artists of the time, such as Bartolomeo Avanzini and Gaspare Vigarani, to transform the ancient and imposing fortress into what would become a prestigious ducal residence.

Located in the Secchia River Valley, the Palazzo was once surrounded by a large grounds and decorated with fountains. Richly and splendidly adorned both inside and outside by such important artists as Jean Boulanger, Angelo Michele Colonna, and Agostino Mitelli, the building enchanted the Duke’s guests, including Queen Christina of Sweden and the Spanish painter, Diego Velázquez.

The Ducal Palace was known for its Italian-style gardens as well as for its large grounds that once covered more than twelve kilometers and extended between the hills and the river plain near Magreta, though that area has been much reduced over the decades. A garden and hunting preserve for the guests of the duchy, the Palazzo once included an area for the raising of cattle and sheep. Small buildings in the complex, the Casiglia and the Belvedere di San Michele, for example, were used for rest and relaxation. At the entrance to the garden, on the south side of the Palazzo, is the Peschiera (the “fish farm”), also known as the “Fontanazzo,” a monumental fountain made of volcanic tufa and other materials that was also designed by Bartolomeo Avanzini and Gaspare Vigarani along with a group of other experts.

Concentrated in an area of only a few tens of kilometers, the Ceramics District is home to numerous producers of Italian ceramic tiles: a product whose beauty and high quality are known and appreciated all over the world. The Ceramics District has opened its doors for the first time to visitors, offering them an opportunity to visit the workshops and other facilities to learn about the origins and production of ceramic objects as well as to experience the scientific and technological expertise that go into their creation.

This “elegant concourse” of vintage autos is sponsored by the Salvarola Hot Springs.

Sassuolo in Bloom (May)

An exhibition of plants, flowers, and gardening equipment.

The “celestial night” celebrates the hot springs of Emilia-Romagna, including the Salvarola Hot Springs.

Thursday Under the Stars (July)

Every Thursday in July, the old town comes alive with concerts, markets, exhibits, and other programs.

The Philosophy Festival—third weekend of September

The Philosophy Festival comes to Sassuolo each September, an event that has garnered national and international fame. Programming includes master classes, events, and exhibitions that bring well-known intellectuals and philosophers to the area.

The origins of the October Fairs go back centuries. Today, they take place over five Sundays in which stores and other businesses remain open and the town’s streets are packed with people. Programs and activities include the morning market, booths open all day for the sale of local products, and sporting, cultural, social, and musical events.

Just as in other towns throughout Modena Province, all the best known local specialties are available in Sassuolo, including PDO (protected designation of origin) Parmigiano-Reggiano cheese, zampone and cotechino (dishes made from a mixture of ground pork flavored with herbs and spices and stuffed into the hollowed-out lower-leg of a hog), prosciutto and other cured meats, fresh filled pastas, gnocco fritto (pastries something like a deep-fried dumpling), crescentine (a round, flat bread, flavored with spices and generally eaten with cold cuts, cheese, or spreads), Lambrusco wine, and PDO and PGI (protected geographical indication) balsamic vinegar. In addition to nocino (a traditional local liqueur made hazelnuts), sassolino (prepared from star anise) is produced here and throughout Modena Province.

The Salvarola Hot Springs are located in the hills three kilometers from Sassuolo. The spa’s mineral waters and mud springs were known to the Romans and were used by Matilda di Canossa and the Estes. All the classic spa treatments are available in the Art Nouveau-style Centro Benessere SPA Balnea building, which dates to 1908. The sprawling spa, whose mission is all-around wellness, is open seven days a week and offers heated and cold pools, wet and dry saunas, a relaxation area, a solarium, four gyms, and a beauty center to ignite all five senses.

Montegibbio Castle stands about six kilometers from Sassuolo, though its interior is not currently open to the public. Likely built at the beginning of the 10th century, the Castle has belonged to the Town of Sassuolo since 1972. The courtyard of the Castle houses the town vinegar cellar, which produces traditional balsamic vinegar of Modena; the cellar is open to visitors upon request (for information: +39 0536/880-801). The Castle is surrounded by Montegibbio Park, a romantic English garden that covers some seventy-four acres. The Park’s centuries-old trees include European hornbeams (a species of birch), hazelnuts, chestnuts, and oaks. The Park is open year round.

For sporty types, or for anyone who enjoys being out in nature, the Secchia River Nature Trail offers opportunities for walking, jogging, cycling and other outdoor activities away from traffic. The Trail, a chance to rediscover the natural charm of a river environment, winds along the Secchia River.

The Via dei Vulcani di Fango (Mud Volcanoes Path) offers an emotional excursion to observe the geological phenomenon known as mud volcanoes (locally called “Salse”) in the towns of Maranello, Fiorano Modenese, Sassuolo, and Viano. The Salse di Nirano Nature Reserve is one of Italy’s most important and among the most interesting in Europe.

The Best Time for a Visit

Here, as throughout Modena Province, the milder temperatures of Spring and Fall are preferable for a visit. At the same time, the town and surrounding areas are lively and offer frequent events and cultural programs, so any time of year deserves to be taken into consideration.

Documents centre for the tile industry - Confindustria ceramica museum and library
Founded in 1995, the Centre has a Museum Section and a Library Section.
Ducal Palace of Sassuolo
The palace, also known as “Delizia” (delight) for its architecture enhanced by fountains and surrounded by gardens, for the beauty of its interior decorations and for its fine location in the broad valley of Secchia, stands as a veritable gem of northern Italian Baroque.
Montegibbio castle and Giuseppe Medici historic park
Montegibbio Castle was erected on a mound on the front hills of the Appenines, 6km from Sassuolo, in the Medieval village of Montegibbio. The park is approximately 30 hectares and is of great botanical interest.
Bertozzi & Casoni museum
The Bertozzi & Casoni Museum is the first permanent contemporary art exhibition dedicated to ceramics. The exhibition is hosted in the hall on the ground floor of the Cavallerizza Ducale in Sassuolo
Contact details