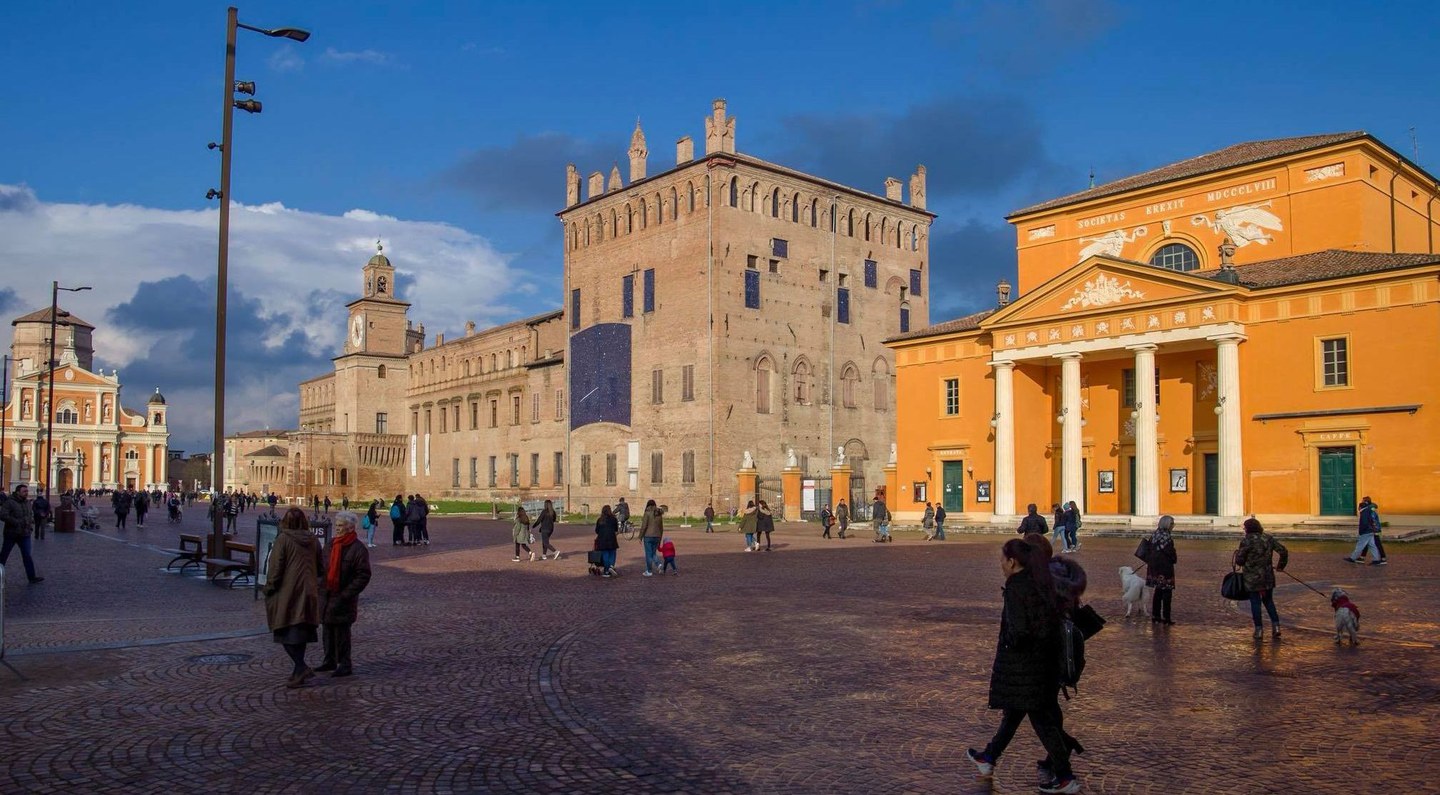 Carpi’s prehistoric origins lie in the Iron Age Villanovan civilization, and it was a village in the Middle Ages. Much evidence of that period remains, including Piazzale Re Astolfo, the town’s center until the beginning of the 1500s and still the heart of the medieval city; and La Sagra (the Church of Santa Maria in Castello, one of Europe’s classic Romanesque-style buildings.

But it is Carpi’s significant historic and cultural legacy, which dates to the Renaissance, that earned the town the nickname,” the pearl of the Renaissance.” Beginning in the fourteenth century, in fact, Carpi became the seat of the feudal seigneury and later a county controlled by the Pio family. The recently restored Palazzo Pio, which houses Carpi’s main museums, is one of the Pios’ most important architectural works. During the Second World War, this area, and especially the nearby village of Fossoli, were involved in the deportation of Jews to Nazi extermination camps. The memory of those tragic events is honored in the Museo al Deportato Politico e Razziale (Museum and Monument to Political and Racial Deportees) in Palazzo Pio.

Carpi today is a lively town with numerous industries and craftspeople, and is well known for its textiles district, its commercial and cultural exchanges, and its many events that celebrate the artistic and scientific life of the local community and beyond.

Carpi’s remarkable artistic heritage is surely one of the main reasons to organize a visit to the area: the architectural splendor of the imposing Palazzo dei Pio, the Cathedral, the Portico Lungo (an arcade with fifty-two arches), and the monumental Piazza dei Martiri, the third largest piazza in Italy. But those are just some of the reasons to visit Carpi, a cheerful town known for its industries and artisans and a textile district famous the world over. More than a hundred factory outlets are scattered around the area.

A stroll through the streets of Carpi’s city center is a great pleasure, especially the route between Piazza dei Martiri and the animated Piazza Garibaldi. You won’t want to miss the many points of interest along the way. We describe many of these in detail below, but two others are the beautiful Municipal Theater and the Former Jewish Synagogue.

The Palazzo Pio Museums include the Palazzo Pio Museum and the Municipal Museum. The first is dedicated to the art and history of the Palazzo dei Pio and its Renaissance court. The most important parts of the museums’ collection are here: paintings, woodcuts, antique objects in wood, and decorated ceramics. The Municipal Museum tells the story of the Carpi area and of the birth and growth of the city, from the first settlements of the Bronze Age to the 1900s, tracing its environmental, social, economic, cultural, and urban development. The Museum also houses a section dedicated to knitted goods.

Museum and Monument to Political and Racial Deportees

The Museum and Monument to Political and Racial Deportees was designed by BBPR Studio in Milan to honor victims of the Holocaust who were sent to a concentration camp in nearby Fossoli before being transported to other Nazi camps. The architecture of the Museum’s thirteen rooms is sober. On gray-plastered walls, phrases and sentences are engraved in red, some of them taken from the letters of members of the European Resistance who were condemned to death and others inspired by the works of Longoni, Picasso, Guttuso, Cagli, and Léger. In the external courtyard, an integral part of the tour, stand sixteen steles in reinforced concrete. Each is six meters high and bears the names of Nazi concentration and extermination camps in Europe.

The Acetaia Comunale is located in a loft above Palazzo Scacchetti, today the town’s city hall, where three “batteries” of casks are housed—named Maria Beatrice, Caterina, and Adelaide—in addition to two “mother barrels.” Each “battery” holds six to eight casks made of various kinds of wood and graduated in size. The vinegar cellar is managed by Carpi-based members of the Spilamberto Guild of Traditional Balsamic Vinegar Makers, and the vinegar they produce each year is presented by the town to visiting dignitaries as gifts or is used in vinegar-tasting classes.Ba

The Basilica of Our Lady of the Assumption

Construction of the Basilica of Our Lady of the Assumption, commissioned by Alberto Pio to serve as a center of religion in the grand piazza where it stands, was begun in 1515. It was designed by Baldassarre Peruzzi, who took inspiration from the work of Bramante and Raphael at the Basilica of St. Peter in the Vatican, incorporating classical elements of Roman Renaissance culture. Work was interrupted in 1525 but recommenced in 1606, at which point construction began to diverge somewhat from the original concept—for example, the completed church lacked a bay space that opened onto the piazza. The current interior was built in the late eighteenth-century and modified the neo-Renaissance architecture and décor. On the altar are works of art that include altarpieces in wood, marble, and imitation marble (known as scagliola); altar frontals; paintings of the 16th- and 17th-century Emilian school; and sculpture.

Palazzo Foresti was built in neo-Renaissance style in 1892 from a design by architect Achille Sammarini. The Palazzo was intended for Pietro Foresti, an industrialist and art collector who housed his remarkable collection there. The façade, in stuccoed brick, includes two balconies with ornamented double lancet windows in terracotta. A late 15th-century terracotta of the Madonna, from the nearby district of Cavallina, is located in an internal courtyard. In the Palazzo’s interior, eighteenth-century frescoes by Lelio Rossi, Carlo Grossi, Andrea Becchi, and Fermo Forti are on display, and the Palazzo houses an important collection of paintings of the Italian school from the late 1800s through early 1900s, including works by De Nittis, Fattori, Malatesta, Graziosi, and Muzzioli.

In addition to Modena’s best known delicacies, such as balsamic vinegar PDO (protected designation of origin) and PGI (protected geographical indication), PDO (protected designation of origin) Parmigiano-Reggiano cheese, Lambrusco wine, zampone and cotechino (dishes made from a mixture of ground pork flavored with herbs and spices and stuffed into the hollowed-out lower-leg of a hog), prosciutto, and fresh filled pastas, the culinary traditions of Carpi, which have been influenced by the expertise and flavor traditions of each of the surrounding regions, include rice, squash, mostarda fina (candied fruit in a mustard-flavored syrup), and pears.

The Philosophy Festival is one of the most highly anticipated and most important events of the year, and its fame has spread across Italy. The Philosophy Festival takes place in Modena, Sassuolo, and Carpi, and hundreds come each year to take part in a dense program of master classes, events, and exhibitions that bring intellectuals and philosophers of national and even international fame to the area.

Each year, the Concentrico Festival transforms the town of Carpi into Italy’s largest open-air theater.

About six kilometers from Carpi, in the village of Fossoli, the Italian Royal Army Camp, built in 1942 to house enemy prisoners of war, can still be seen. In December 1943, the camp was transformed by the Fascist government into a concentration camp for Jews; and, after March 1944, it became a prison and transit camp used by the SS to house prisoners destined for Nazi concentration camps and as a center for Italian racial and political deportees. Between 1945 and 1947, it became an immigration camp for foreign refugees and was used after the way for civilian purposes. It became first an orphanage known as Nomadelfia and later, from 1954 until the end of the 1960s, was known as the Villaggio San Marco, a community for Dalmatian and Julian refugees from Istria.

The Campogalliano Museum of Scales and Balances (“Museo della Bilancia”)

Campogalliano and its Museum of Scales and Balances (“Museo della Bilancia”) lies a few kilometers from Carpi. Scales and other measuring instruments were being produced in the area as early as 1860, and the Museum houses a collection of measuring devices from the time of the Romans to the modern era. Exhibits are housed in an industrial building dating to the early 1900s To date, some 1,249 instruments currently make up the heritage of the Museum, of which three quarters are scales of various types, and the others are weights (including coin weights) and weight sets, linear measures and measuring devices of capacity for both dry goods and liquids, as well as a varied collection of documentary materials such as posters, catalogues, and original vintage prints.

As is true for all of Modena Province, good weather will make your visit that much more pleasurable, and the mild Spring and Fall temperatures are preferable for travel here. At the same time, Carpi’s high spirits and its many programs and events make it a good place to visit all year round

Museo al deportato politico e razziale ( Museum and Monument to Political and Racial Deportees)
The Museum and Monument to Political and Racial Deportees was designed by BBPR Studio in Milan to honor victims of the Holocaust who were sent to a concentration camp in nearby Fossoli before being transported to other Nazi camps.
Pieve di Santa Maria in Castello - Sagra church
The Sagra is the mother church of Carpi. Tradition and legend have the church dating back to the mid VIII century (752 A.D.) through the intercession of the Lombard King Astolfo. However, the oldest historical documents regarding the church date from the IX century (978 A.D.).
Musei di Palazzo Pio (Museums inside the Palazzo dei pio Castle)
The Museums of Palazzo dei Pio are a coordinated system of three routes exhibition - Palace Museum , City Museum, Museo al deportato - into the prestigious spaces of the Renaissance Palazzo dei Pio to provide contextual placement , rational and structured approach to the vast and varied historical and artistic heritage of the collections, in an exhibition that aims to provide a comprehensive picture of the development and history of the city .
Fossoli Camp
Fossoli camp is located in the town of Fossoli, a few kilometres from Carpi.
Pio Castle
Palazzo dei Pio, commonly called the Castle, is a highly articulated, monumental complex made up of towers, turrets, courtyards and buildings constructed between the XIV and XVII centuries. It was the home of the local Pio lords.
Marri collection paintings and sculptures at Palazzo Foresti
The collection of paintings and sculptures of Palazzo Foresti is one of the most representative of the Italian artists of the 19th and 20th centuries
Dorando Pietri, marathoner (1885-1942)
Dorando Pietri was born in Mandrio, near Correggio, on 16 October 1885. On 22 October 1897, his family moved to Carpi where his father opened a greengrocer shop.
Santa Chiara Churches and Monastery
The monastery and the adjoining external church were started around 1490 by Camilla Pio di Savoia who retired there as a nun in 1500
San Bernardino da Siena Church
It is the patronal church, being dedicated to San Bernardino da Siena. It was built starting from 1604
Cattedrale dell'Assunta - Duomo
The cathedral was dedicated to the Assumption of the Virgin Mary. The construction of the church began in 1514 and was not completed until the end of the 18th century. In 1979, on the occasion of the 200th anniversary of the foundation of the diocese, it was granted the status of a minor basilica.
Museo diocesano di arte sacra
The high and imposing brick façade surmounted by the tympanum is in line with the road perspective and is lined by two buildings of the same height: the Bishop’s Seminary and Palazzo Vellani.
Archivio storico (Municipal Historical Archive of Carpi)
The municipal historical archive constitutes the most consistent nucleus of the public archival heritage of Carpi. It is the product of the centuries-old civil administration activity of the local community.
Foresti palace
In 1892, Pietro Foresti appointed the architect-engineer, Achille Sammarini (1827--1899) to adapt -, and in part demolish - his family's old industrial buildings, which had previously been used to manufacture straw and cork hats.