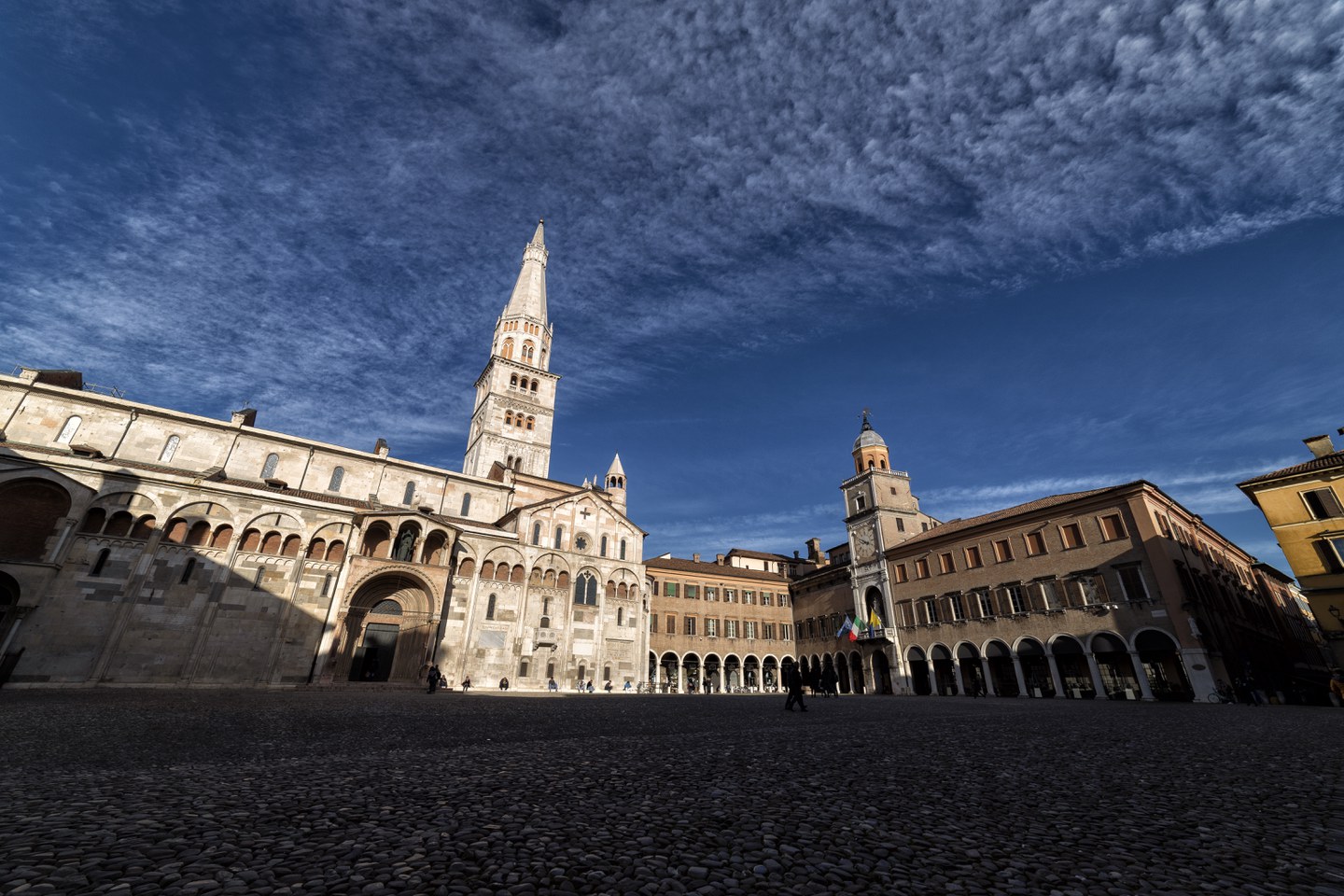 Founded by the Etruscans in a strategic position, Modena became a Roman colony known as Mutina in 183 BCE. At that point, the city began to expand rapidly. After the fall of the Roman Empire, however, the city declined significantly as the result of Barbarian invasions, devastating floods, and conflicts between Lombards and Byzantines.

In that same period, Geminianus, the bishop—and later the patron saint of Modena (San Geminiano)—carried out his important works. Geminianus died on January 31, 397 BCE and his feast day is still celebrated each year on that date.

It was following the year 1000 that Modena developed once more. On June 9, 1099, construction began on the Romanesque-style Modena Cathedral. In 1126, Modena became a free town and, in 1175, a university—now one of the oldest in the world—was established.

The medieval “communal era” of the 12th century was a period of conflicts and vendettas among powerful families, concluding with the arrival of the Estes who made Modena the capital of their fiefdom and continued to rule over it until the 1700s.

After the French Revolution and the later establishment of the Kingdom of Italy, Modena gained its independence. During the Second World War, Modena enjoyed significant economic progress, and small and medium-sized businesses flourished. It is those enterprises that still give Modena its international reputation.

For art, music, the automobile industry, and fine food, Modena is an alluring destination that offers visitors nearly unlimited opportunities.

Let Modena charm you with its blend of tradition and innovation: magnificent architectural achievements (three of which have been designated a UNESCO World Heritage Site), a lively culture, world-renowned cuisine, and a hearty welcome for visitors.

Fans of art and architecture will love the treasures that have brought Modena to the attention of the world. Among these is the UNESCO World Heritage Site (which comprises the Modena Cathedral, the Ghirlandina Tower, and Piazza Grande), a showcase of Italian Romanesque-style architecture.

The Ducal Palace is another. The seat of the Este court when the House of Este moved to Modena from Ferrara in 1598, it is today home to the Military Academy, and its Este Galleries preserve inestimable works of art. Modena is also famed as the city of Luciano Pavarotti, for whom the Municipal Theater was named. The Luciano Pavarotti House and Museum is located a few kilometers from the center of Modena.

If “food tourism” is your joy, you’ll find tables in Modena laden with local culinary specialties such as PDO (protected designation of origin) and PGI (protected geographical indication) balsamic vinegar, Parmigiano-Reggiano cheese, Lambrusco wine, prosciutto, and tortellini. One of the best restaurants in the world, Osteria Francescana by Massimo Bottura, is located in Modena old city center.

Those who can’t get enough of powerful, stylish automobiles will be fascinated by the stories of ingenuity and imagination homegrown in and around Modena: Ferrari, Maserati, Pagani, and Stanguellini. In fact, Modena is the birthplace of Enzo Ferrari, and automobile manufacturing and legends of speed are an integral part of local culture.

In addition to the Ferrari Museums (one is located in Modena and another in nearby Maranello), a journey of only a few kilometers takes visitors to plants, museums and to such shrines as the Maserati showroom, the Umberto Panini Collection of vintage cars, the Stanguellini Museum, the Righini Collection, the Pagani Plant and museum, and the Autodromo di Modena.

To help you organize the best possible visit, we’ve put together a list of ten places we think you shouldn’t miss. See if you find it useful.

Synonymous with fine dining, the Modena area is famous all over the world for its cuisine, an accolade earned through Modena’s respect for authenticity and tradition.

We’ve prepared a perfect menu of Modena-area specialties just for you.

Here are ten sites you won’t want to miss—or take a look at the special sections we’ve created to help you discover the treasures in towns and villages around Modena.

Here are just a few: Carpi, a Renaissance gem; the Benedictine Abbey in Nonantola; the Ducal Palace in Sassuolo, as well as the Salvarola Hot Springs, known for spa treatments that use such local products as Lambrusco wine, and tours of the ceramics district, both nearby; the Villa Fabriani Museum of Traditional Balsamic Vinegar in Spilamberto; Castelvetro, a charming village known for its Levizzano Castle; the Rocca dei Contrari Fortress in Vignola, a town famous for its cherries; the Castle in Formigine; the Salse di Nirano Nature Reserve and Spezzano Castle in Fiorano, where the Fiorano Museum of Ceramics is located; MUSA, the Museo della Salumeria (“Museum of Charcuterie”), in Castelnuovo Rangone; the Terramara Open-Air Archaeological Park and Museum in Montale; and the nearby Modena Golf & Country Club.

And that is far from all. Modena’s Apennines, in addition to the area’s ancient towns and historic castles, offer opportunities of all kinds for sports and nature enthusiasts.

This website is designed to help you explore all there is to do and see in and around Modena and to inspire you to find the travel experience that is right for you!

Modena hosts an impressive number of events and festivals each year. Consult our site for important dates.