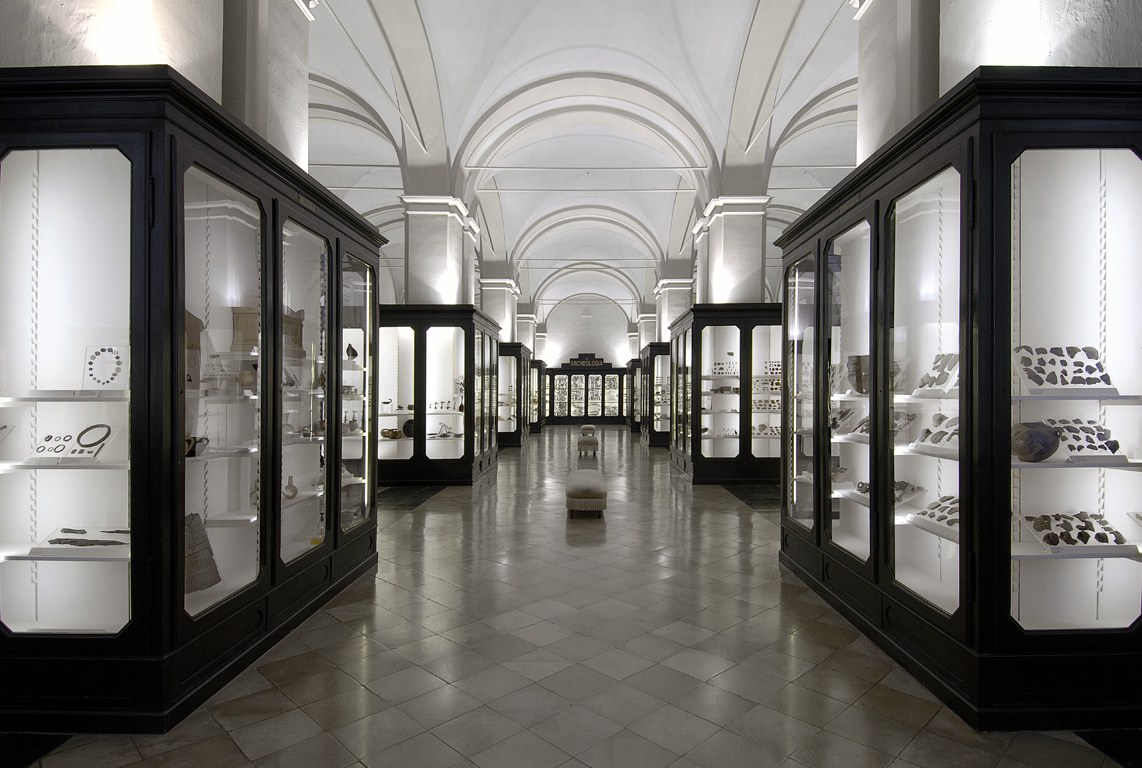 Galleria Estense
Estense Gallery is among the most important art collections in Italy. It is evidence that the Este Dynasty was not solely interested in painting and sculpture, but also collected archeological pieces and traditional arts and crafts. Bernini’s marble bust of Francis I d’Este, a Velázquez portrait of Francis I, Cosmè Tura’s “Saint Anthony of Padua”, Correggio’s “Madonna and Christ Child”, a triptych by El Greco, and a crucifix by Guido Reni are particularly noteworthy. The collection focuses prominently on painting in the Po valley area between the 1300s and the 1700s.
Palazzo dei Musei (Museums Palace)
The Palazzo dei Musei, built in the mid-18th century, initially housed the military arsenal. Designed by the Duke Francesco III d’Este to accommodate the General House of the Poor, the building was renovated by Pietro Termanini in 1769. In 1788 it was turned into the House of Crafts. It is now the Palace of Museums, containing a handful of key cultural institutions. On the ground floor, in the northern courtyard, is the reception area for all of them.
Biblioteca Estense
The Estense Library has a collection that includes printed books, incunabula and a large assortment of illuminated manuscripts from the 14th to the 16th centuries. The centrepiece is the Bible that belonged to Borso d’Este, a 15th-century masterwork of illuminated miniature of the Ferrara School.
Museo lapidario romano
Situated in the west wing of the Palazzo dei Musei, the section of Roman inscribed stone slabs and tablets houses the monumental testimonies of Mutina which have come to light over the past forty years following a series of discoveries in the areas outside the perimeter of the Roman city occupied in the imperial age by a monumental necropolis.
Gipsoteca Graziosi (Giuseppe Graziosi Plaster Cast Museum)
The Giuseppe Graziosi Fund is made up of the plaster cast museum, opened in 1984 following the acquisition of a considerable collection of moulded, painted and graphic works by the artist, donated by his children Paolo Graziosi and Rosetta Graziosi Vespignani.
Cathedral Museums
Inside the UNESCO World Heritage Site in Modena these museums are of fundamental importance as they are closely linked to the history of the cathedral.
Aedes Muratoriana
In the heart of Modena, in one of the most evocative areas of the city, is the Aedes Muratoriana. It comprises a group of buildings at number 1 Via della Pomposa, in the square of the same name, which is also the site of the church of Santa Maria della Pomposa and the rectory of Lodovico Antonio Muratori (1672-1750) with its garden.
FMAV - Museo della Figurina Collection
The Museo della Figurina contains a unique collection of small colour picture cards that was created by the passionate collector Giuseppe Panini. The Museo della Figurina is owned by the Fondazione Modena Arti Visive (FMAV)
University museums
Museo Lapidario Estense (Estense Lapidary Museum)
Established upon the wish of Duke Francis IV d’Este in 1828, the Lapidary Museum was the first national museum for public use in Italy. It remains one of the most important in the region for the quality of the exhibits. These include marble sarcophagi from Ravenna from around the second and third centuries, and sundry reliefs and carved slabs from a similar era. The permanent exhibition is set under the portico of the internal courtyard of the Palazzo dei Musei.
Novi Ark Archaeological Park
Excavations below Novi Sad Park, before it became a huge underground car park in 2010, unearthed significant archaeological finds from various eras of the Roman period. The site was a peripheral section of the ancient city of Mutina, crossed by a large cobblestone street. The excavation also brought to light a necropolis, with numerous tombs and funerary monuments, two rural buildings, tanks and production facilities, and three large waste dumps containing amphorae and other archeological materials. The findings are placed in a chronological period between the first century BC and fifth century AD.
Casa Museo Luciano Pavarotti (Luciano Pavarotti House museum)
Luciano Pavarotti Foundation opens extraordinarily the doors of Casa Pavarotti, transformed into House Museum through the set-up of a path that will allow to know the man and the artist Luciano Pavarotti.
Laboratory of mathematical machines
The Laboratory of mathematical machines (the MMLab), at the University of Modena e Reggio Emilia,contains a collection of geometrical instruments (called ‘mathematical machines’).
Museum of astronomy and geophysics
The Museum of Astronomy and Geophysics is located in the historic headquarters of the Geophysics Observatory, precisely in the east tower of the Ducal Palace.
Museum of zoology and comparativa anatomy
The zoological collections include about 3,500 naturalized vertebrates (birds, mammals, fish, reptiles), of which about 100 belong to the vertebrate fauna of the Modenese area; about 1,000 vertebrates preserved in liquid (fish and reptiles in particular), 250 skeletons and anatomical parts of vertebrates, several hundred invertebrates preserved in alcohol or formalin.
MUSEUM OF PALEONTOLOGY
The Museum of Paleontology, founded in 1776 at the behest of Duke Francesco III D’Este, was born as an integral part of the Natural History Museum.
Gemma 1786. Estense Mineralogical and Geological Museum
The vicissitudes that have accompanied the origin of "Gemma 1786", the Estense Mineralogical and Geological Museum of the Earth Sciences Department, reflect the cultural evolution that, during time, has characterized the city of Modena and its territory.
The Civic Museum of Modena
The Civic Museum of Modena is an exceptional archive of stories and contexts, techniques and forms that range from prehistory to the present.

Maserati Factory and Showroom
Maserati is one of the most fascinating car production companies with a long history of appeal, tradition and sporting success.
Stanguellini museum
In the fascinating Stanguellini Museum founded in 1996 by Francesco, Vittorio's son, visitors can survey the automobile vicissitudes of this family of historic manufacturers, admiring their finest cars, motorcycles, accessories, photographs, reviews and the advertising material of the epoch.
Umberto Panini historic cars and motorcycles collection
This museum houses one of the world’s most complete Maserati collections, including the A6GCS Berlinetta Pininfarina, of which only four were made, which with its “barchetta” body was a three-time winner of its category in the Mille Miglia.